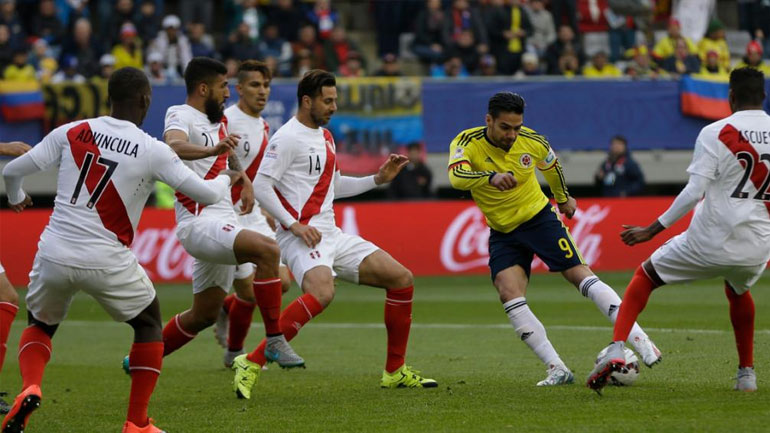 Colombia through to next Copa America round thanks to Brazil win

Colombia were left sweating on their Copa America hopes after a lackluster 0-0 draw with Peru on Sunday. It took Brazil beating Venezuela to secure Los Cafeteros’ place in the second round.

The 0-0 draw took Peru into the quarter-finals immediately but Colombia’s advance was dependent on the result of the day’s later match between Brazil and Venezuela.

Unlike in most tournaments the final Copa America group games are not played concurrently and Colombia needed either Brazil or Venezuela to win and leave them as one of the best third-placed teams.

Brazil’s 2-1 subsequent win over Venezuela gave them top place in Group C and a last-eight clash with Paraguay, meaning Colombia scraped through as the second-best third placed team to a quarter-final against Group B winners Argentina on Friday.

Peru had the same goal difference as Colombia but finished second in the group on goals scored and progressed to a quarter-final with Bolivia, who were second to hosts Chile in Group A.

“We tried everything, Colombia always sought to win the match. We came close, in the first half we put a lot of pressure on Peru,” coach Jose Pekerman told reporters.

“But then we suffered an unexpected injury, inopportune, unfortunate. That’s always a difficult situation … Valencia was the nexus who made all our players fit together.”

Colombia lost their rhythm after Valencia fell badly on his right knee in the 20th minute of the match at Temuco and had to be replaced by Alexander Mejia.

“The game evened out a bit, we tried to accommodate ourselves but didn’t quite manage,” said Pekerman, whose side had beaten Brazil 1-0 in their previous match after a shock 1-0 loss to Venezuela.

“We had chances in the second half and sought desperately to score,” the Argentine added.

“A goal changes things and if you don’t score it gets tough. To be 0-0 was not good for us, we played under the sword.

“Peru kept their lines tight, their priority was to draw and sporadically try to make the most of a chance … We were never able to play through balls which is what we like.”

“We didn’t play well and we’re suffering,” star-player James Rodriguez said. “We need to look at ourselves and recognize that when we don’t score we have to take responsibility.”

Colombia were the better side and Peruvian keeper Pedro Gallese got down well to stop Radamel Falcao opening the scoring in the third minute. Pablo Armero then shot into the side netting after a defense splitting pass from Rodriguez.

Jackson Martinez missed a great chance to guarantee Colombia’s advance when he scuffed a weak shot straight at the keeper in injury time.

The draw left both Colombia and Peru with four points in Group C and ended Ecuador’s chances of progressing as one of the two best third-placed teams from Group A.

Colombia will face Argentina in the quarter finals, Peru will face Bolivia and Brazil will play Paraguay.