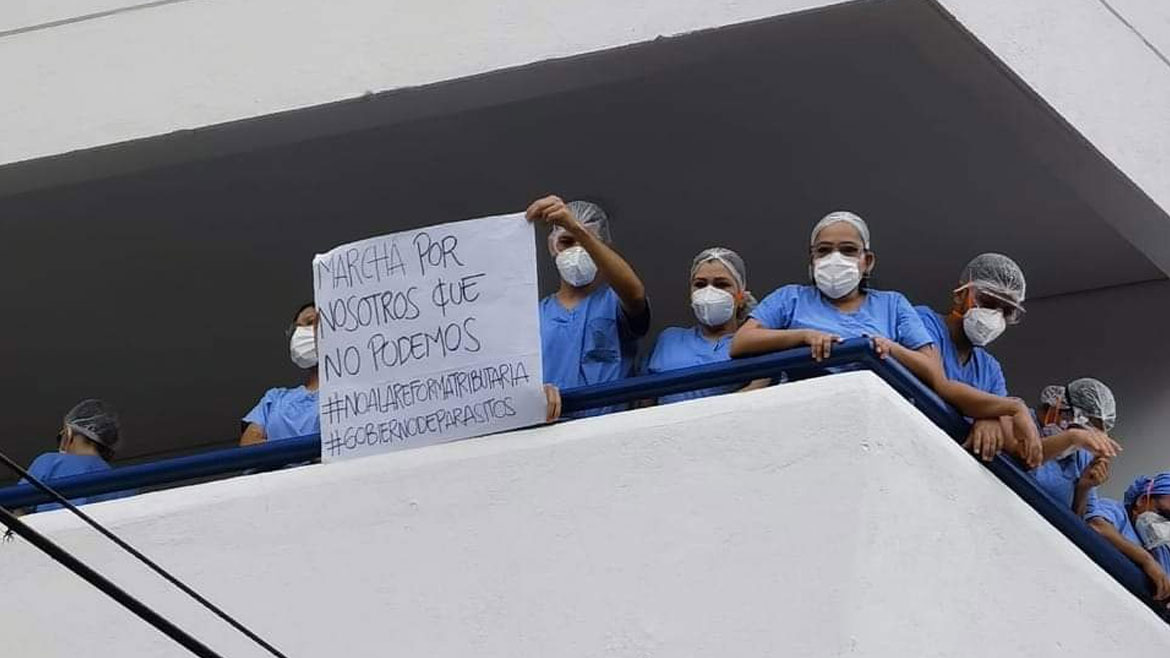 Colombia’s health ministry reported more than 500 COVID-19 deaths on Thursday, the highest number of daily fatalities since the beginning of the pandemic.

The record number of daily deaths was reported on the last day of the pandemic’s deadliest week in Colombia.

According to the health minister, 3,204 people died of COVID-19 in the past seven days as a third wave of infections in knocking down hospitals in cities throughout the country.

The latest wave is contributed to the appearance of more infectious strains of the coronavirus and the government’s failure to respond to the worst health crisis in more than a century.

How critical the situation is

More than 108,000 people were registered as positive on Thursday. Of these people, 7,280 were in intensive care units (ICU’s).

The combination of the high saturation rate and a shortage in oxygen for medium-care patients has created the worst healthcare crisis since the beginning of the pandemic.

Hospitals in the capital Bogota are on the brink of collapse. The healthcare systems in other major cities collapsed weeks ago already.

The situation is most critical in Medellin where only 18 of the city’s 1053 ICU’s are available, according to statistics by the Health Secretary of the Antioquia province.

Hundreds of people are waiting to be transferred to one of the ICU’s of Colombia’s second largest city amid fears that a growing number of medium-care patients could deplete region oxygen supplies.

The government of President Ivan Duque has refused to listen to medical organizations that have begged for a minimum basic income and a new lockdown to resuscitate collapsed healthcare systems and prevent the collapse of healthcare in cities like Bogota.

Duque and Health Minister Fernando Ruiz are under severe pressure from powerful business associations and corporations to ignore public health and the national economy.

Ruiz has only allowed governors and mayors to impose mobility restrictions at night and during the weekend, which forces many urban dwellers to commute in overcrowded mass transit systems.

The government’s refusal to implement a minimum basic income as advised by both the medical community turned the  healthcare crisis into a humanitarian disaster for the country’s poor and lower class communities.

Almost two-thirds of the more than 73,000 coronavirus-related deaths were mourned in these communities while only 3.4% of the fatalities were mourned by the families of the country’s top earners.

The government’s response to the coronavirus pandemic has contributed to social unrest and the resurgence of anti-government protests.

The failure to control the latest coronavirus outbreak is partly due to the chaotic implementation of the government’s National Vaccination Plan.

Duque and Ruiz have repeatedly vowed they would protect 70% of Colombia’s 51 million inhabitants against the coronavirus before the end of the year.

Since the unprecedented vaccination drive kicked off on February 17, health authorities have only been able to vaccinate 1.5 million people.

This implies that those who fall in the government’s lowest priority group would have to wait until August 2023 for their vaccination.

The main problem is that foreign pharmaceutical companies fail to produce and deliver vaccines as promised, an issue that is causing problems worldwide.

In April, less than half of the 8.5 million vaccine shots promised by Ruiz last month effectively arrived on Bogota’s El Dorado Airport.

These delays and problems with distribution have caused vaccine shortages throughout Colombia that in turn have forced local authorities to pause planned vaccinations.

Another problem is that many of the notoriously corrupt health intermediaries never updated their databases, which has particularly complicated effectively vaccinated people of 80 and older who were designated the vaccination plan’s top priority.

To counter the delays caused by the intermediaries, the health minister on Thursday announced that he would lower the age of people who can be vaccinated to 60.

The minister already allowed people of 65 and older to request vaccination at public hospitals without the involvement of the controversial health intermediaries.

More 2.8 million Colombians have been infected by the coronavirus since it was first detected in March last year, according to the Health Ministry.