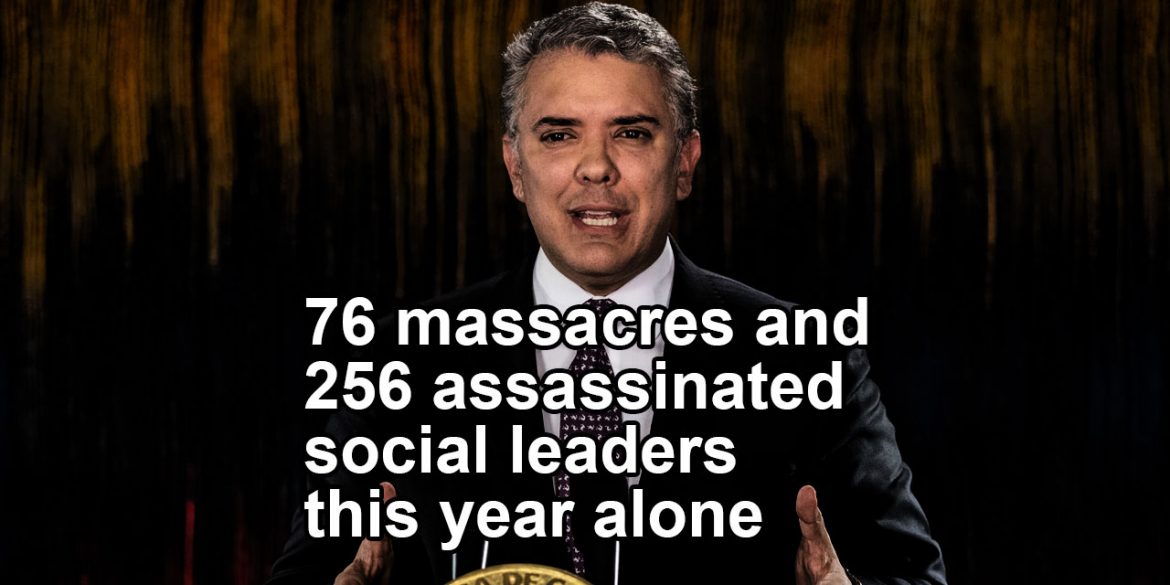 Colombia’s far-right President Ivan Duque went mute on Sunday after two massacres made it painfully clear how his government is sinking the country into violent chaos.

A massacre in Betania, a small town in the southwest of the Antioquia province, became the 76th this year and left seven people dead and three people injured.

“Ten heavily armed men arrived at the farm and shot indiscriminately at 14 people who were staying there. Seven were killed and three wounded” on Saturday evening, according to Mayor Carlos Mario Villada, who blamed the latest bloodbath on a dispute between drug dealers.

“The police and prosecution are investigating what happened,” the commander of the 7th Division of the National Army, General Juan Carlos Ramirez, told reporters.

Defense Minister Carlos Holmes Trujillo, who traveled to the region to meet with Governor Anibal Gaviria and mayors, said paramilitary group AGC is behind the majority of massacres in Antioquia, the group’s home turf.

According to conflict monitoring NGO Indepaz, Antioquia has seen by far the most mass killings this year.

The province was the birthplace of paramilitary groups that were financed by drug trafficking in the 1990’s and have controlled much of Antioquia ever since.

A massacre in Cauca, which has seen the second highest number of mass killings so far this year, took place around the same time as the one in Antioquia.

Among the five fatal victims of this massacre was a local community leader, who became the 256th assassinated social leader so far this year.

The southwestern province has seen the highest number of assassinations of human rights defenders and community leaders so far this year.

Cauca has also seen the rearmament of of approximately a dozen FARC dissident groups in response to Duque’s reluctance to implement a 2016 peace deal signed by the former guerrillas and former President Juan Manuel Santos.

The peace process is fiercely opposed by the president’s political patron, former President Alvaro Uribe, a former Medellin Cartel associate who is being investigated for his alleged complicity in three massacres.

Instead of implementing the peace process, Duque created a so-called “Peace with Legality” process, which appears to be sinking historically violent regions like Antioquia and Cauca into violent chaos.