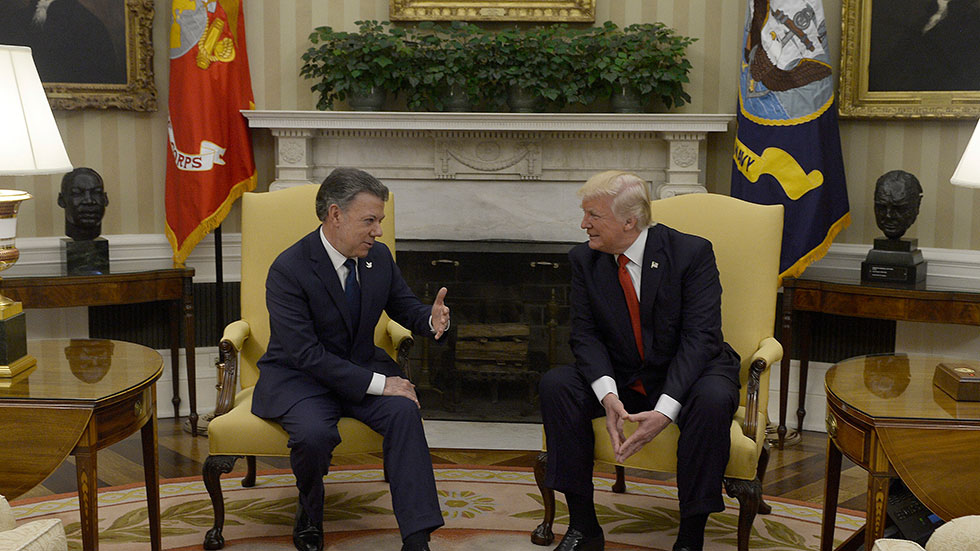 US President Donald Trump failed to endorse, or even mention Colombia’s peace process in his speech following his first meeting with his counterpart Juan Manuel Santos in what seemed a major breach in a decades-long bilateral alliance.

The Colombian president’s main priorities in the meeting were to get an explicit endorsement of the South American country’s peace process from Trump in order to boost public support, as well as to effect a change in the United States’ drug policy. Trump ignored both issues.

Instead, the US President talked about Venezuela, Colombia’s neighbor, central American criminal groups, and a wall he has promised to build along the US-Mexican border.

Ignoring the armed conflict that has left at least 265,000 Colombians dead and 7 million displaced, Trump went as far as falsely claiming that violence seen in Venezuela had not been seen in the hemisphere in decades.

Before the press conference, Colombian representatives could be seen entering the room unable to disguise the disappointment on their faces, after what seemed a major breach in the decades-long alliance between the two countries.

After prompting from a reporter, Trump did congratulate Santos on signing peace with the FARC, saying the Colombian President had done “a tremendous job,” but left it clear that Venezuela, and not Colombia, is a priority of his administration’s foreign policy.

Santos also couldn’t resist highlighting the two countries’ apparent contradictory policies in regards to bilateral relations, and the future relationship between the United States and Latin America, where Trump is widely loathed.

When asked his opinion on Trump’s plans to build a wall on the US-Mexican border, Santos said economic development in Latin America was the answer to transnational crime, including drug trafficking, in the hemisphere.

The meeting between the two heads of state was highly anticipated after months of ambiguity about the United States’ stance on Colombia’s peace process, and Trump’s promise to cut foreign aid “across the board.”

While both presidents pledged their commitment to the fight against drug trafficking, their respective policies diverge, and even oppose each other. Neither president showed any indication he would in any way support the other’s policy.

Colombia decriminalized drug use and possession years ago, and stopped the US-endorsed aerial fumigation of coca crops after major domestic resistance and a World Health Organization report indicating the pesticide delivered by the US-based multinational Monsanto could be carcinogenic.

Also in terms of trade, no consensus whatsoever seemed to have been reached.

The joint press conference left the impression that the two countries would go their separate ways in what used to be clear bilateral policies.

After being asked if Santos had any advice for his US counterpart, the Colombian president said “He can take care of himself.”

The consequences of the United States’ failure to support peace building in Colombia and the apparent breach in bilateral ties are difficult to conceive.

Colombia has long relied on the United States to maintain a succession of right-leaning governments, while neighboring countries increasingly veered left.

Meanwhile, after decades of controversial and sometimes violent interference in Latin American countries’ affairs, Colombia was one of the US’ few remaining allies in South America.

However, the absolute lack of support of Trump for Colombia’s internationally praised peace policy and Santos’ verbal resistance to US foreign policy in the region could mark the end of an era of US influence in the region, at least in Colombia.