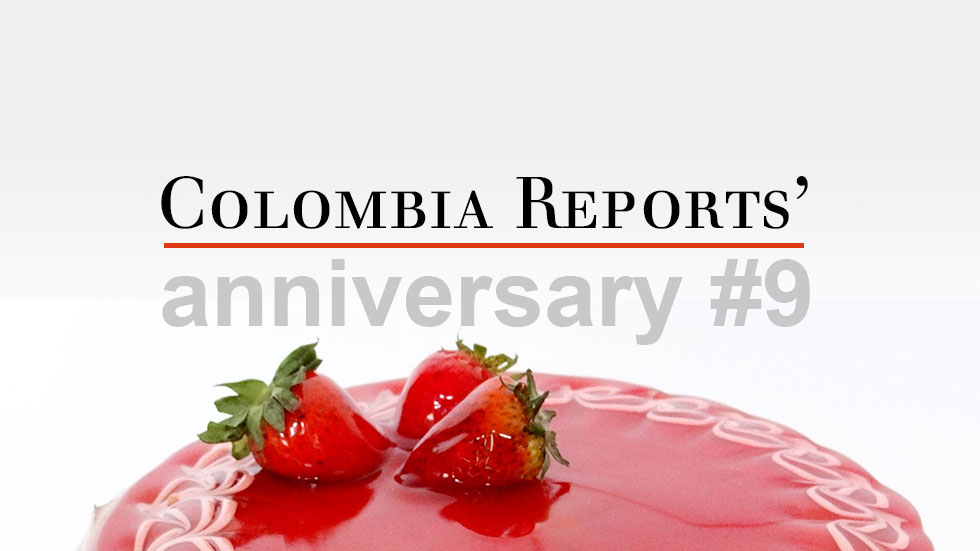 Colombia Reports’ 9th anniversary and the year ahead

Colombia Reports is celebrating its 9th anniversary today as it looks towards what should be our most challenging year yet.

This website began on February 9, 2008 as a blog that sought nothing but to bring Colombian news that we felt was ignored by “the mainstream media.”

Essentially, this meant I wanted to write about the Medellin flower festival, folkloric culture, tourism and the many small things that make a country- things I still want to write about. But the forces of politics had different plans apparently.

When Colombia Reports began in 2008, the country was at the height of a gigantic scandal involving almost systemic ties between government, the military and paramilitary death squads. Paramilitary representatives were even having secret meetings inside the presidential palace and congressmen were literally jailed by the dozens.

The ongoing scandals never allowed us to report as broadly as I initially intended and still would like. Moreover, as our audience grew, costs increased and the responsibility to report on what actually matters grew too. When peace talks between the Santos administration and the FARC began in 2012, many were dependent on our reporting to know and understand what was going on.

What I quickly found out is that independently reporting on war, the causes of war and victims’ stories were never going to fit in a business model. I tried. Frankly, I don’t care. I have never wanted to be a businessman, but a journalist.

Fortunately, voluntary reader contributions do make our work possible. Colombia Reports has always had a strong community of people who wanted us to tell the truth, no matter how ugly it got. Many have since become a “friend” of Colombia Reports and contribute monthly, depending on what they can miss. Those without extra cash have access to exactly the same information.

The monthly contributions have resulted in reader contributions overtaking advertisement as the website’s primary source of income, while facilitating huge technical improvements, a major increase in quality and no bill left unpaid.

Most importantly, it has allowed us to refuse advertisers promoting, for example, prostitution or dodgy investment schemes, while freely investigating and denouncing alleged crimes committed in Colombia by the same corporations that fund corporate media abroad.

The past few years we have documented a peace process taking place in Spanish and made it available for an English-speaking audience. The final result of this is unprecedented as we have created a freely-available archive of peace talks that can be used as reference for conflict resolution in the future.

Having said this, our DIY approach to publishing has its limits. Reporting on the activities of heavily armed groups without any type of protection is not without danger and a heavy mental strain.

With a second round of peace talks coming up, this time with the ELN, and a peace process with the FARC that is already showing cracks, there is no way we can adequately report on what’s ahead without increased community participation.

We have the ability, know-how and desire to cover this, but we lack the adequate means. I’d be lucky if my computer survives 2017. The letters on my keyboard have long gone, and there’s no money for a new machine.

Meanwhile, the FARC peace process requires scrutiny and scrutiny requires human resources. The ELN process merits similar scrutiny as we have given that of the FARC. The FARC process and the peace-building process merit to be made public. The growing paramilitary threat must be addressed, but is ignored by Colombian media.

For this reason I again appeal to you to become one of our friends and subscribe to support us monthly if you are not doing so already. With your support we have been able and will be able to improve our reporting.

I will also be appealing for grants abroad to see if we can make this website take the next step, broaden our reporting in regards to economy, culture and tourism, and provide journalism jobs instead of unpaid internship positions.