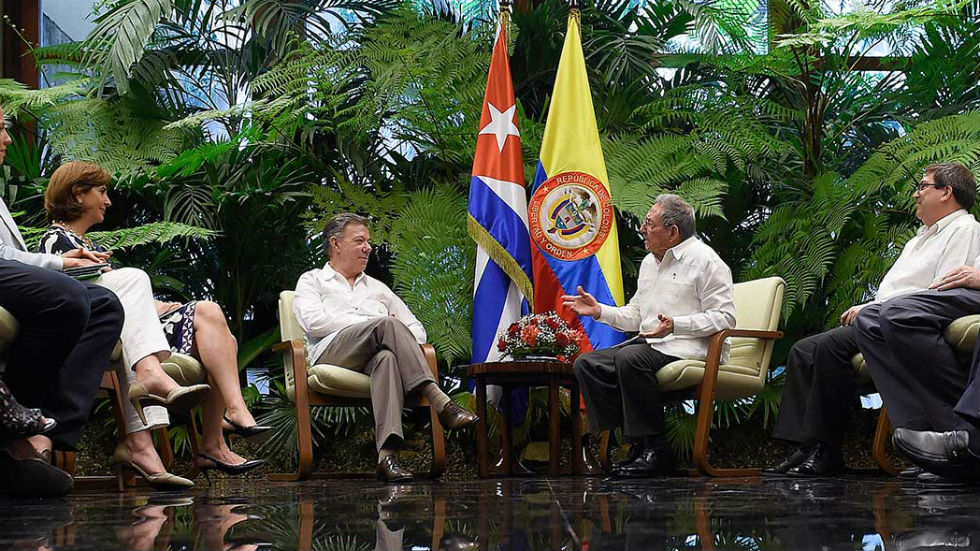 Colombia’s President Juan Manuel Santos confirmed on Monday that he aims to secure an expansion of economic ties with Cuba during his visit to the Caribbean country this week.

The head of state traveled to Havana on Monday along with some 20 Colombian businessmen in the sectors of construction, packaging, agribusiness, food, electricity and electronics, engineering and oil service, and energy and chemicals, all of whom participated in a Cuba-Colombia Business Forum.

“This is the ideal time to take advantage of these good relations Cuba and Colombia have. Today businesses are made sector by sector, company by company, to see how we make decisions that strengthen trade and investment,” said Santos.

Colombia hails US for will to normalize relations with Cuba

Colombia and Cuba had entered into an Economic Complementation Agreement within the Latin American Integration Association (Aladi) framework in 2001 but with the latter more open to trade discussions recently, Santos is seeking to take advantage and expand trade potential across the board.

“We are interested in opening our integration to the rest of Latin America and to the world,” said President Santos, adding that Cuba can benefit from the new markets opened by the agreement of peace in Colombia.

“There is everything to be done. Colombia is very interested in investing in Cuba. Colombia has been promoting investment abroad and the region where we have been most active is the Caribbean and Central America,” he said.

The head of state also believes that cooperation in the area of tourism in particular could “generate immense benefits to the two countries.”

At present, both nations hold a friendly exchange of mutual respect after the successful negotiation of a peace deal between the Colombian state and the Marxist-inspired FARC rebels on Cuban soil over the past four years.

While the purpose of Santos’ visit is primarily to discuss economic themes, he took time to thank Cuba for their assistance in brokering the deal that ended more than 50 years of internal conflict in the Andean country.

“We the Colombians will always have Cuba in our hearts for supporting, in every way and at all times, the end of an internal conflict which bled our nation for more than 50 years,” said Santos.