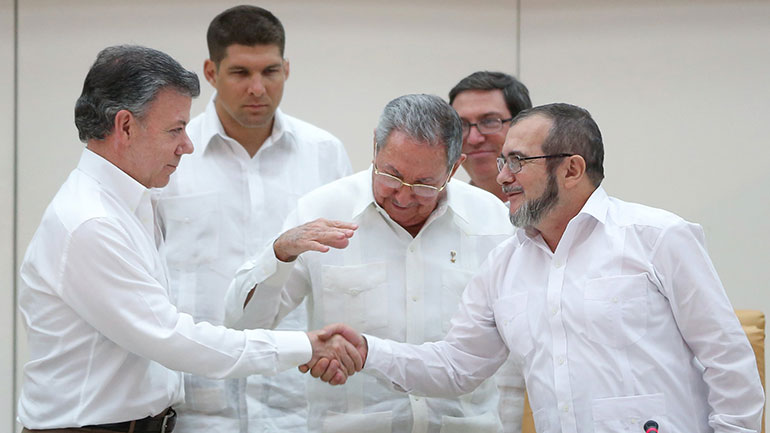 Colombia peace talks miss deadline but not without progress

Colombia’s government and left-wing FARC rebels missed the March 23 deadline for the signing of a peace agreement. While peace was not obtained, some progress has been made in the past six months.

President Juan Manuel Santos and FARC leader “Timochenko” shook hands on September 23 to have a peace deal ready before March 23.

By then, the parties that have been at war since 1964 had already agreed on victims, rural reform, political inclusion of the FARC and the rebels’ abandoning of the drug trade.

However, with only “End of Conflict” left on the agenda, the issues of establishing a permanent bilateral ceasefire and the demobilization of the left-wing guerrillas became major stumbling blocks that effectively made Santos and Timochenko break their promise to the Colombian people.

Searching for tens of thousands of missing persons

The ‘transitional justice’ deal agreed upon in September was met with mixed feeling from both the Conservative opposition and international human rights groups particularly to the administration of punishment.

However one of the principal tenets of the justice agreement was for provisions in relation to victim reparation.

The setting up of “a specialized unit to search for people who are considered disappeared”in October was a significant development in the negotiations.

This unit was charged with the task of locating, exhuming and returning the remains of what the Medical Examiners Office estimated to be 77,000 victims who are registered as disappeared.

This initiative announced by Cuban and Norwegian representatives was seen as positive move towards advancing the healing process.

The FARC agreed to “surrender information for the localization of victims’ remains they know of, and will contribute to their dignified surrender” to the loved ones, some of whom have been waiting for their disappeared family members for decades.

Should the peace deal be signed, this special unit will operate autonomously to prevent undue intervention from authorities.

Throughout the talks many of the problems encountered that slowed progression owed their roots to ongoing mutual mistrust between both sides.

Amid negotiations regarding a bilateral ceasefire, Santos moved to improve trust between the two sides by releasing 30 convicted FARC rebels on November 22.

The guerrillas who were released were convicted only on charges of rebellion but not charges related to criminal activity or war crimes.

This gesture of goodwill was well received by the rebel leadership, “We appreciate … the government’s announcement to pardon 30 prisoners convicted for rebellion,” said FARC negotiator “Pablo Catatumbo” at a press conference in Cuba.

The willingness of the Santos administration to deliver on some of the promises made in the negotiations has fostered a level of trust that may be crucial as both sides seek to agree upon a final settlement.

International cooperation and participation has been one of the principal features of the process throughout the negotiations with external oversight regarded as essential.

This came amid tentative discussions regarding the demobilization of the left-wing rebels and their reintegration.

The FARC had repeatedly expressed reservations about their safety should they disarm, citing fear of attacks from other paramilitary groups.

The UN intervention would have the 15-nation council “establish a political mission to participate for a period of 12 months … to monitor and verify the definitive bilateral ceasefire and cessation of hostilities, and the laying down of arms.”

The establishment of “a political mission of unarmed international observers” will also be open the idea of members of the Community of Latin American and Caribbean States to contributing personnel.

This was a significant breakthrough in the negotiations as it showed the willingness of the FARC to progress towards demobilization by allowing the international body to settle any disputes and make recommendations.

The UN welcomed the development, British Ambassador Matthew Rycroft said. “I hope today will mark the start of the final stage of peace talks.”

President Santos also expressed his optimism stating that, “Colombia receives the support of the world,” via Twitter.

The arrival of the UN was also coupled with more international co-operation as in the form of assistance fro the European Union.

While agreement with the UN did not hasten the negotiations towards the March 23 deadline, it has provided for assistance with one of the most contentious aspects of ending the conflict, rebel disarmament.

While March 23 may pass without a momentous declaration of a peace settlement between Colombia’s government and the FARC rebels, the last six months have seen progress made.

Despite the obvious and sometimes understandable mistrust between the two negotiating parties, both sides have displayed a clear desire to work towards a final settlement to bring to an end the longest internal conflict in Latin America.