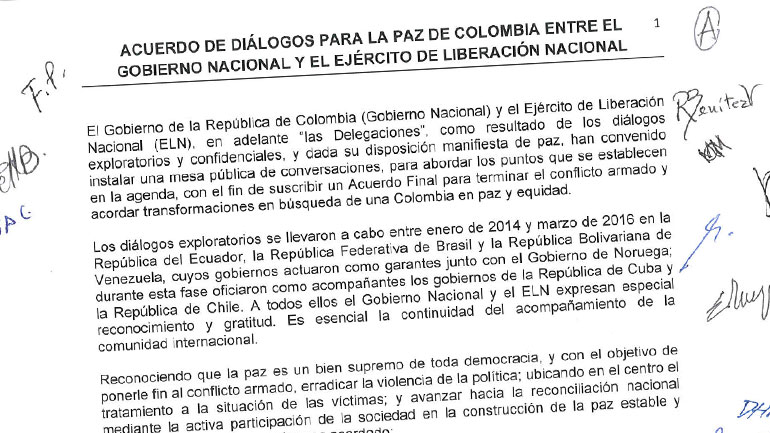 The following is the literal translation of the agreement between Colombia’s government and the ELN, the country’s second largest rebel group, who jointly announced peace talks on Wednesday.

Colombia peace talks agreement between the national government and the ELN

The Government of the Republic of Colombia (National Government) and the National Liberation Army (ELN), from here on “the delegations,” as the result of exploratory and confidential talks and given their expressed disposition for peace, have agreed to install a public table of conversations to tackle the points established in the agenda, in order to subscribe a Final Accord to end the armed conflict and agree to transformations in the search for a Colombia in peace and equality.

Acknowledging that peace is the ultimate good of any democracy, and with the objective to put an end to the armed conflict, eradicate political violence, putting at the center the situation of victims and move towards national reconciliation through active public participation and the construction of stable and lasting peace, the delegations have agreed to the following:

The participation of society will be:

a) Depending on initiatives and proposals that make peace viable in the course and context of this process.
b) About the issues on the agenda
c) A dynamic and active, inclusive and pluralist exercise that allows the construction of a public vision of peace that appropriates the transformations towards the nation and the regions.

Democracy for peace is the purpose of this item of the deal:

a) Realize a debate that allows examining the participation and the decisions of society in the problems that affect their reality, and can be channeled towards constructive elements for society.
b) Treatment of conflicts towards the construction of peace
c) Revision of the regulatory framework and guarantees for public demonstration. Treatment of the legal situation of the accused and convicted of acts in the development of social mobilization.
d) Public participation in the construction of citizenship.

To agree on transformations towards peace is the purpose of this point, taking the following into account:

a) Transformative proposals made by society, underpinned by the results of item 2 of this agenda (“Democracy for peace”).
b) Transformative programs to overcome poverty, social exclusion, corruption and environmental degradation, in search of equality.
c) Comprehensive alternative plans with a territorial focus that constitute economic and productive options that benefit the communities.

In building a stable and lasting peace, essential is the acknowledgement to the victims and their rights, as well as treatment of and resolution to their situation based on truth, justice, reparation, commitments of non-repetition and remembrance. These joint elements support forgiveness and a reconciliation process.

The objective of this item is ending the armed conflict to eradicate violence in politics and facilitate the transition of the ELN to legal politics, for which the following points will be addressed:

a) Definition of the future judicial situation of the ELN and its members
b) Security conditions and guarantees for the ELN
c) Conditions and guarantees for the political exercise of the ELN
d) Tackling the detention of charged and convicted members of the ELN
e) Clarify the phenomenon of paramilitarism for it not to repeat itself
f) Humanitarian and dynamic actions
g) Bilateral ceasefire and cessation of hostilities to end the armed conflict
h) Under the new circumstances generated by this process, an agreement will in regards to the ELN’s arms will be constructed in order to end the armed conflict.

The government will make the procedural and institutional adjustments required for the due diligence of the agreements mentioned in this item.

The implementation seeks the execution of the reached agreements of this agenda, in order to realize the changes that will allow movement from armed conflict to peace, taking into account the following:

1. Objective information for the country in regards to the debate and progress at the table

a) Society needs objective and balanced information about the talks and the peace process. To reach this, among other, participatory communication will be facilitated.
b) Joint declarations at the end of each cycle and when the delegations deem convenient.
c) Declarations of each delegation when it so deems convenient
d) The table will have its own means of communication like joint statements, reports, a website and whatever else will be agreed in the course of the public phase.

2. Pedagogy for peace is based on:

a) Public participation
b) The proportionality of the table in the transformation of the armed conflict
c) Creating a favorable environment for peace
d) Communicating this pedagogy as an element of the construction of a culture of peace.
e) The peace talks will be conducted in an environment of respectful cooperation

3. Operation of the table

a) Each delegation will have 30 representatives. During the table’s sessions 10 members of each delegation will participate, five primary and five supplementary.
b) The conversations during the public phase will develop following the order of the established agenda. Any change will be mutually agreed.
c) Once the process is public, mechanisms with the Havana Table will be established to identify issues that require coordination and synchronization.
d) The delegations will agree to the table’s operating rules for the public phase
e) In each work session a time limit will be established for the following. The duration of the sessions, the recesses between them, and consults will be defined in alignment with the process and the needs of the joint table or a delegation.
f) Each delegation will have its advisers who are considered necessary for the development of the process. The same goes for the table.
g) For the treatment of the received proposals on the items of this agenda particular relevance will be given to recommendations of the public. The delegations will define the working methods and forms of public participation.

The Colombian government will make the resources available for the operation of its delegation.

The costs related to the ELN (delegation, advisers and activities to be developed during the process) will be financed through an international cooperation resource fund which will be established for this purpose.

This agreement was developed between January 27 2014 and March 30 2016, in Ecuador, Venezuela and Brazil.