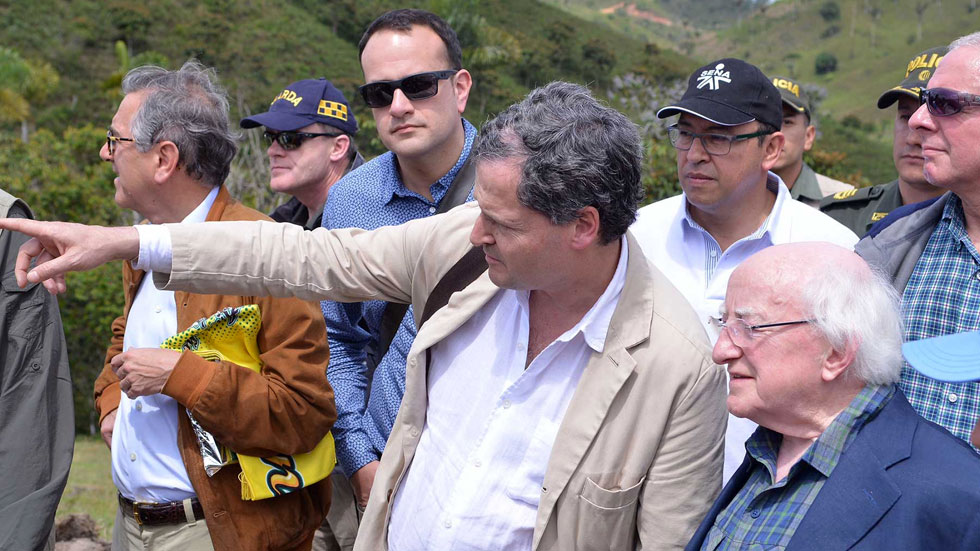 Colombia peace process a ‘project of hope’: President of Ireland

The President of Ireland continued his tour of Colombia by visiting a FARC demobilization camp on Sunday and delivering a keynote speech at a Bogota university on Monday.

Irish President Michael D. Higgins reiterated the European country’s continuing support for the peace process between the Marxist-inspired rebels and the Colombian government calling it a “project of hope.”

The Irish president delivered a speech entitled “on peace, reconciliation and ethical remembering, and the specific contribution to conflict resolution made by the Colombian peace process,” at Bogota’s National University of Colombia.

Higgins compared the similarities of the plights of the two nations and congratulated Colombia on the progress it has made up to this point.

“Let me express my admiration for all of those who have played their role in negotiating this extraordinary moment of hope and possibility for Colombia at which you have arrived, and in your achievements in creating mutual understanding from the devastation wrought by bitter conflict,” said the Irish head of state.

The president covered a number of aspects of the Colombian situation in his speech appealing to all involved to address the root causes of the conflict as a means of reaching a lasting peace.

“Lasting peace will never be achieved if we ignore, deny or fail to address the underlying causes of conflict. That is a process which calls for an honest engagement with the past,” said the official.

In particular, Higgins drew on his previous experience of Colombia when he visited as part of a parliamentary delegation facilitated by an Irish charity identifying the issue of land ownership  which was also a root cause of the Irish conflict.

He recalled “the terrible realities, through the generations, of a country structured on deep inequalities; a nation where 0.4% of landowners owned 61% of rural land, and indeed one in which 1% of people owned 58% of urban property.”

The implementation of the peace accord in Colombia will seek to redistribute land that was stolen during the displacement of millions of people, an issue which Higgins understood as “the centrality of land to conflicts across the generations resonated with us Irish.”

On Sunday, the president visited a demobilization site in Anori, a municipality in the province of Antioquia, where the rebels are demobilizing.

Higgins, who traveled by Blackhawk helicopter to the site with Colombia’s Peace Commissioner Sergio Jaramillo, shook hands and spoke with senior FARC commander “Pastor Alape” upon his arrival.

Alape said that the FARC were greatly inspired by the peace process in Northern Ireland whereby the Irish Republican Army (IRA) and Unionist paramilitaries laid down weapons in favor of a power-sharing government.

“Their process has given us a lot of strength and perhaps it is a model for the giving up of arms. We’ve had a lot of exchanges of ideas and exchanges of experience and the Irish model has been very important for us in this process,” he said, reported El Tiempo newspaper.

“This is why we are so delighted to have the President of Ireland here,” he added.

On Tuesday, Higgins will meet with his Colombian counterpart, Juan Manuel Santos, for a workshop based on the experience of the Northern Ireland peace process.

Colombia’s peace process has been assisted by the Irish in many ways up to now with the FARC and the government consulting with a delegation from Northern Ireland in the summer of 2014 and receiving a delegation in Havana in October of 2015.

Ireland has provided $12.5 million in funding to Colombia over the past decade, according to a spokesperson from the president’s office.

A total of $1.25 million was provided last year, with more than $2.3 million foreseen for 2017, “mainly for projects aimed at the implementation of the peace accord, including its human rights aspects,” the spokesperson said.

In his speech in the capital, Michael D. Higgins insisted that Ireland’s financial support of the process will continue as the peace accord is being implemented.

We will continue to provide that assistance in the coming, critical, years, including through the Trust Fund which we have helped to establish together with our friends in the European Union. This Trust fund is just one element of the broader support which the EU has been providing to many hundreds of projects all over Colombia, with hundreds of millions of Euro in funding. Ireland has been pleased to contribute to this effort over many years and will, may I say it again, continue to do so.

While Higgins acknowledged that “Ireland is proud to have played it’s own small part in relation to the peace process”, he warned that the process is in its early days and that it will take time and effort for reconciliation to be realized.

“When you come out of a long conflict like this, as we would know in Northern Ireland, may I just say this, when the documents have been signed between the people who are at the top of organisations, it is always a proud ceremonial moment, but it is really only the beginning,” he added.

While the FARC are nearing the final stages of their demobilization process, both sides must stand before a transitional justice mechanism and truth commission to begin the process of justice and reconciliation, a process which Higgins cautions as a difficult one.

“Reconciliation is an essential part of any sustainable peace. It involves recognizing that while the hurts of the past cannot, and must never be, forgotten, we must also recognize that the future is alive with possibilities not yet born, from which no version of past conflicts should preclude us.”