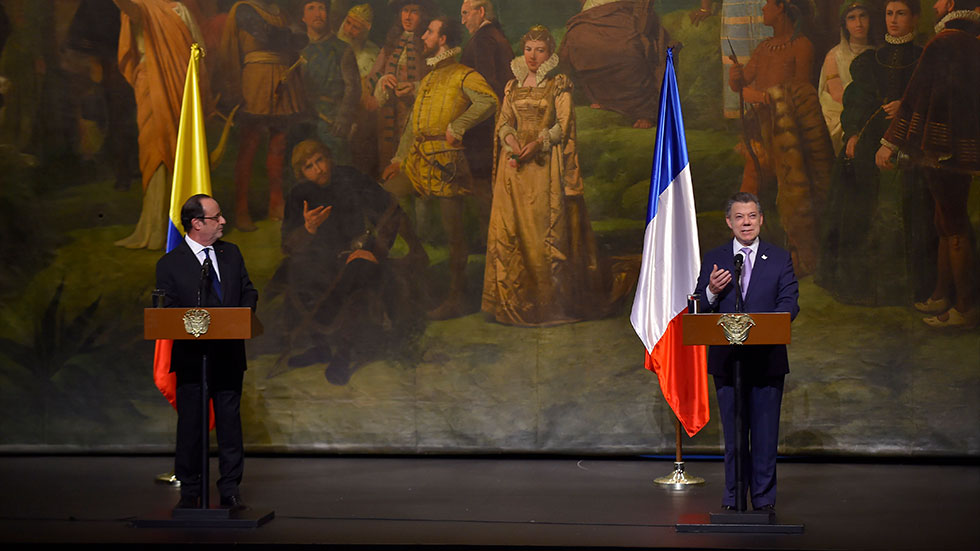 Colombia peace process ‘an example for the world’: Hollande

The successful peace talk between Colombia’s government and Marxist FARC guerrillas are an “example to the world,” said French President Francois Hollande while on an official visit in the South American country.

Hollande, the leader of one of the European nations that support the peace process that began in December, is on a two-day visit in Colombia, which he said has been an example for the world.

“What has been achieved with this peace agreement is not just a victory for Colombia, which overcomes a conflict that has cost more than 50 years, hundreds of thousands of deaths [and] millions of displaced,”

(The peace agreement in Colombia) is an example for the world to see, because this result shows that through negotiation, dialogue and perseverance, you can solve conflicts.

Hollande maintained that France plans to be involved in the peace process long-term, adding: “The international community must be by your side… I want to show you that France is present, not only to support you but to accompany you.”

The French head of state also held an hour long meeting with Colombia’s chief government negotiator with the FARC, as well as the High Commissioner for peace, according to Spanish news agency EFE. The meeting had not been listed on his official schedule.

Hollande arrived in Colombia on Sunday and is expected to visit a FARC demobilization camp in the southwest of the country on Tuesday, before flying back to Paris.