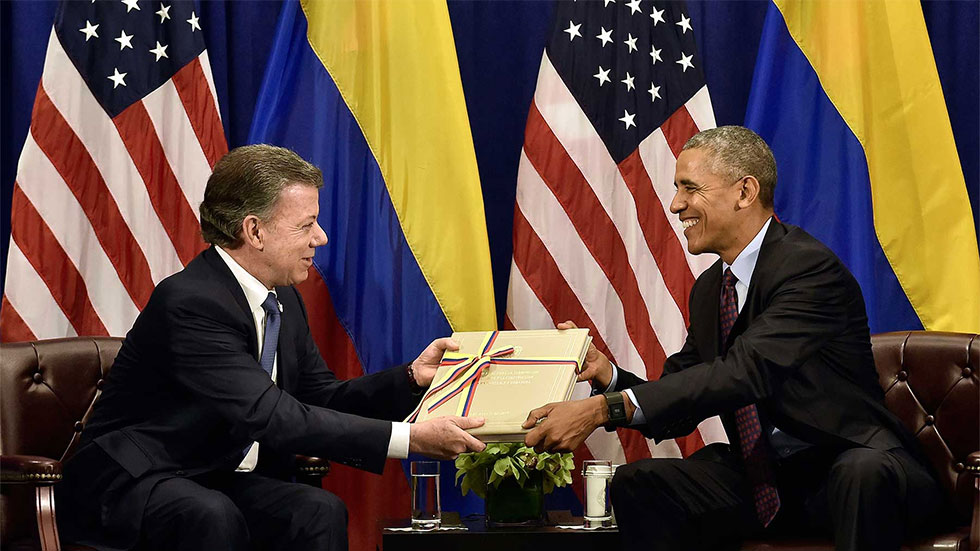 Obama met with his Colombian counterpart, President Juan Manuel Santos, to receive his copy of the peace agreement that’s been negotiated since early 2011 and is set to formally be signed next week.

“This is the first time that I’m seeing him in person since the historic agreement that was achieved in Colombia, ending the longest war in Latin America and providing an opportunity for Colombia to open an entirely new chapter of its history,” Obama said.

“I could not be more supportive of these efforts.  The American people welcome these efforts,” the US president who will leave office in January said.

According to Obama, the peace deal, which still has to be approved by the Colombian people before taking effect, “ultimately will be good for the region, as well as the people of Colombia.  It took a lot of courage and a lot of hard work by a lot of people.  And we are very proud to have played a modest part in helping the dialogue go forward.”

The US president won’t be attending Monday’s peace ceremony but said that, aside Secretary of State John Kerry, a bipartisan congressional committee will travel to Colombia’s Caribbean coastal city Cartagena to attend the peace ceremony.

According to Santos, “when I decided to take this step” to begin peace talks with the Colombian state’s oldest enemy “one of the first persons that I informed about my intentions was President Obama.  And since then, he has been a great support. Every day, every week asking how is it going, and supporting it in every way possible.”

Santos’ has been in the US since Sunday to present the peace deal to both the US government and the United Nations Security Council and General Assembly.

Additionally, the president has been seeking funds for one of the biggest challenges of Santos’ post-FARC Colombia, clearing more than half of his country’s territory of landmines.

Santos will be back in Colombia tomorrow, just days before the formal signing of peace on September 26 and the referendum on the deal on October 2.