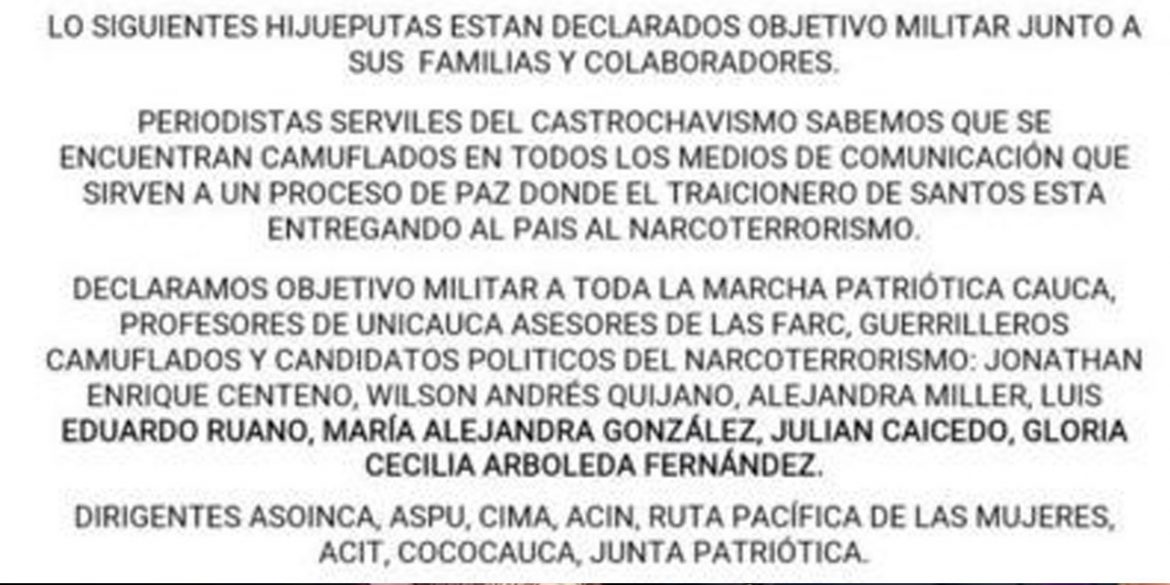 Death threat sent to journalists accused of being "servile to Castrochavismo," a term dubbed by former President Alvaro Uribe.
News

Colombia’s prosecution announced on Wednesday that it has opened a hotline for journalists, social leaders and human rights defenders who receive death threats.

The hotline was opened after foreign governments called on authorities to act against an increase in far-right death threats against journalists, representatives of conflict victims, community leaders and human rights defenders.

The hotline will allow “immediate assistance” in the event a journalist or a leader receives a threat, the prosecution said on its website and Twitter.

According to the Ombudsman’s Office, more than 300 social leaders have been assassinated since 2016, the year that former President Juan Manuel Santos signed peace with now-disarmed FARC guerrillas.

The Foundation for the Freedom of Press (FLIP) said last month that 124 journalists have also received death threats.

In a tweet, FLIP added Monday that in the southern Putumayo local journalists have received four death threats over the past five days alone.

The United Nations, the US government and multiple foreign organizations have said to be “extremely concerned” about the aggression and deadly violence.

President Ivan Duque rejected the killing of social leaders in his inaugural speech on Tuesday, but failed to announce action against the violence that has spiked since he was elected in June.

While both Duque and Prosecutor General Nestor Humberto Martinez have claimed much of this violence comes from drug traffickers, independent analysts have stresses that many of the threats are of political nature and originate from pro-government far-right groups.

While announcing the hotline, the prosecution said it would work closely with the FLIP, the organization that has been defending the freedom of press and the safety of those reporting on the country.

In a press release, the Prosecutor General’s Office said it was investigating 188 death threats that targeted 227 journalists since 2016.

Far-right violence has spiked after the demobilization of the FARC, which controlled approximately one third of Colombia’s national territory. Using brutal methods, the guerrilla group maintained order in regions traditionally neglected by the state until their demobilization last year.