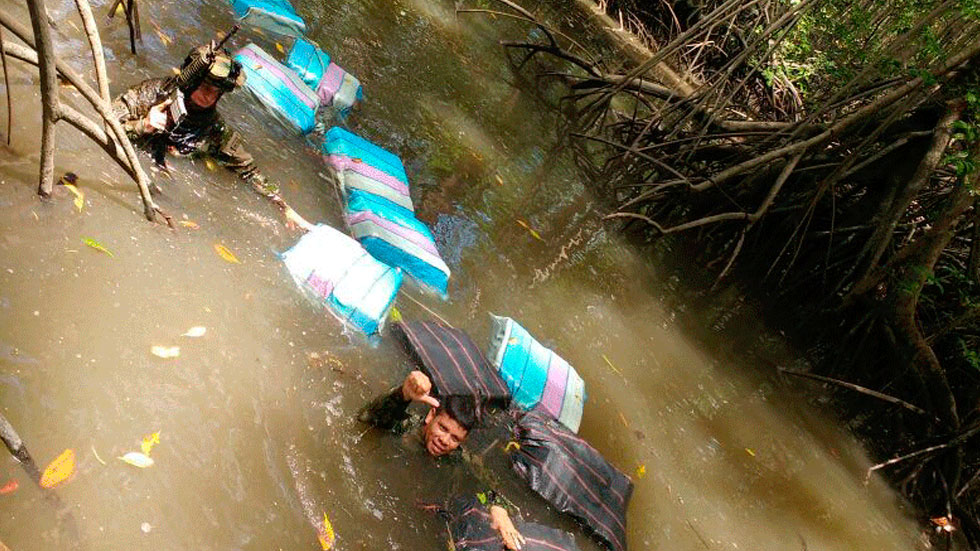 Colombia’s security forces on Tuesday seized more than two metric tons of cocaine in two operations carried out in the southwest of Colombia.

Coast guards monitoring the Pacific Ocean near the town of Mosquera, Nariño seized 37 packages with a total of 1,500 kilos of cocaine on board a ship, said the Navy.

The shipment was seemingly on its way north to Central America.

The four men on board of the vessel were arrested and taken to the port city of Tumaco where prosecution officials took responsibility of the drug trafficking suspects.

In a second operation, this time in the rural part of Tumaco, members of the Counter-Narcotics Task Force found another 21 packages containing 762 kilos of the illicit drug hidden in the coastal mangroves.

According to the authorities, the drugs belonged to the AGC, a.k.a. “Los Urabeños,” a successor group of the paramilitary organization AUC that has taken over much of the AUC’s control of drug trafficking activity in Colombia.

According to the Defense Ministry, more than 200 tons of cocaine have been seized in Colombia so far this year, 30% more than in the same period last year.

The area around Tumaco where the drug busts took place is one of the most important coca growing regions in Colombia.

Because the port town is located close to the Ecuadorean border, it has become an important drug trafficking hub for cocaine due both south and north.