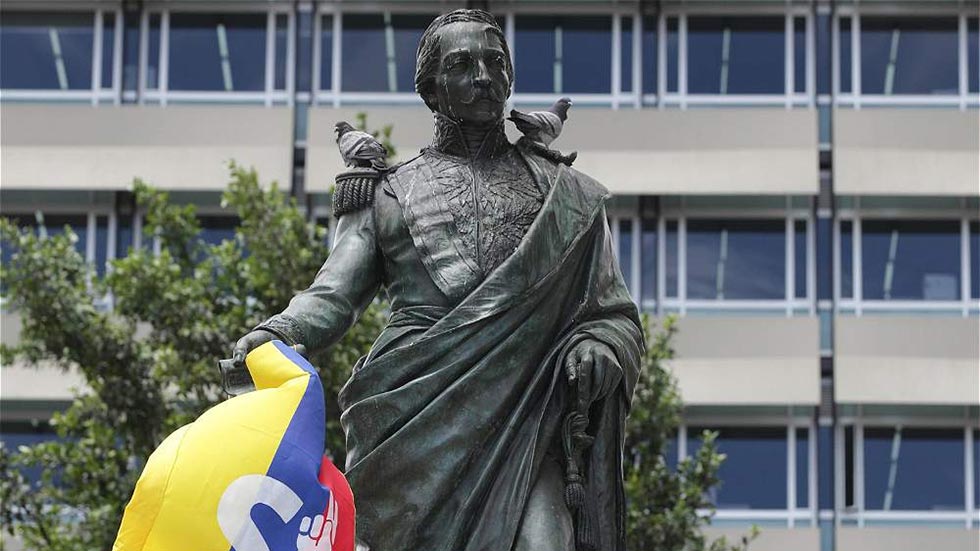 A citizens’ campaign for a “yes” vote in an upcoming referendum to endorse a peace pact with leftist FARC guerrillas sparked controversy Thursday because the demonstrators gathered around the statues of famous figures in the nation’s history to convey their message.

The campaign, led by a group called “For Colombia, Yes,” covered statues of the nation’s early fighters for independence like Simon Bolivar the Liberator, Francisco de Paula Santander and Antonio Nariño with flags stamped with the word “Yes” and with fingers shaping the letter “V” for victory.

Several sculptures of Colombian artist Fernando Botero were also covered with the yellow, blue and red flag, as well as statues of Mahatma Gandhi, and Amerigo Vespucci and Miguel de Cervantes.

Flags even covered statues of songstress Shakira in her hometown of Barranquilla.

The campaign has caused ill feelings among a sector that rejects the use of historic figures for political or electoral purposes.

Ex-President and Senator Alvaro Uribe, leader of the rightist Democratic Center party and a strong critic of peace talks with the Revolutionary Armed Forces of Colombia, or FARC, was one of the first to slam the campaign and said the government of President Juan Manuel Santos was doing “advertising” with the country’s resources and has “taken over” Bolivar for the purpose.

Last Monday the Santos administration gave its support to the peace process with the FARC by launching the “Yes for Peace” initiative, following its weekly meeting.