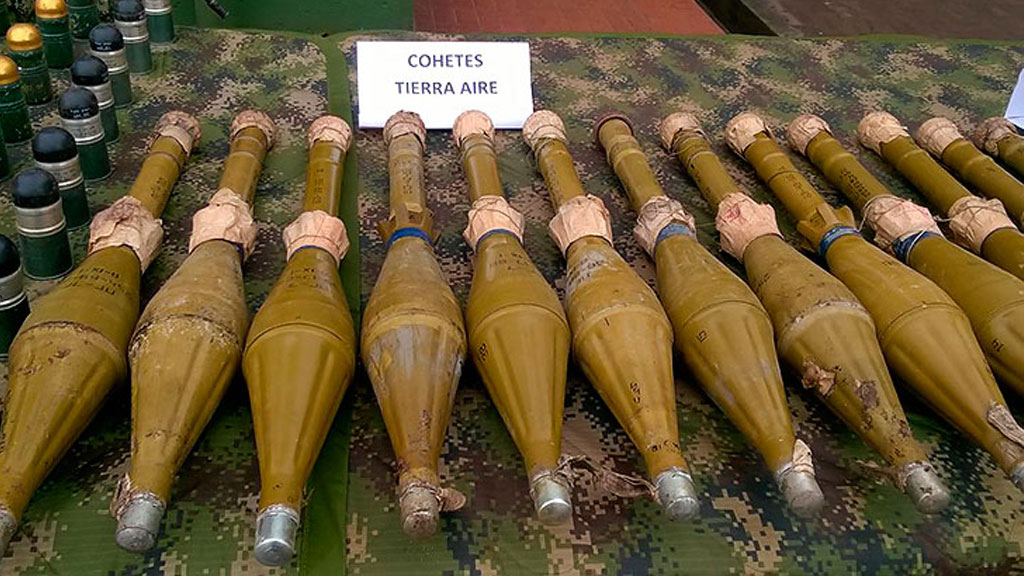 Colombia’s military said Wednesday it had seized 16 anti-aircraft rockets which were allegedly destined for the rebel group FARC.

The commander of the Pegasus Task Force, General Luis Fernando Rojas, announced that as well as the rockets which are capable of taking down an aircraft, the army also seized 20 other cargoes and 470 loads of 40mm grenades.

The Russian-made RPG 7V anti-tank rockets were on their way to the 29th Front of the FARC when they were intercepted by the military, Rojas said.

The general stated that the operation was conducted in the municipality of Aldana, which borders Ecuador.

According to military officials, the weapons seized could have been used to attack armoured vehicles which are used to maintain the safety of the roads in the region. The rockets could have attacked an aircraft flying at 200-300 meters.

The driver of the vehicle in which the weapons were being transported fled when he noticed the presence of authorities.

The authorities invited the public to continue reporting suspicious events that may threaten the peace and progress of the region.

There have been two cases of illegal arms trafficking already this week. One destined for the hands of the FARC and one for the paramilitary group known as Los Urabeños.

The FARC, which since 2012 has been negotiating a political solution to the armed conflict with the government, declared a unilateral and indefinite truce that has been in effect since December 2014.