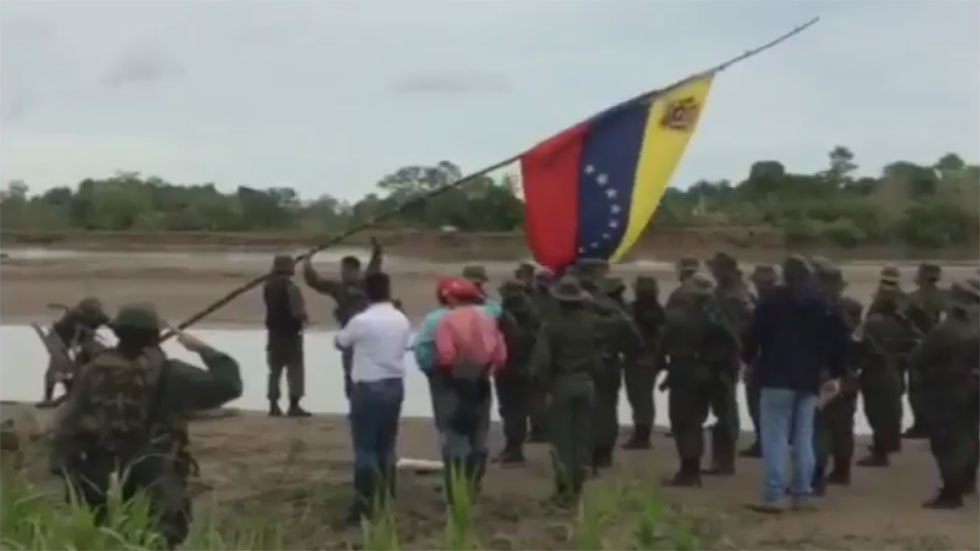 Colombia’s armed forces commander on Wednesday published a video showing Colombian soldiers escort Venezuelan colleagues to their home country after spending days on the wrong side of the border.

In the video published by General Juan Pablo Rodriguez, soldiers are seen taking down the Venezuelan flag that had been planted in the camp across the Arauca river, which separates the two countries.

The group of between 60 and 125 soldiers made the incursion into Colombian territory on Sunday, setting up camp and raising the Venezuelan flag.

In a televised speech, Santos said he wasn’t aware of the Venezuelan incursion until Wednesday, at least two days after it happened.

“As soon as I found out about the situation yesterday, I instructed the ministers of Foreign Affairs and Defense to communicate with their Venezuelan counterparts, following our custom of prioritizing dialogue and diplomatic means to solve problems.”

According to Santos, he had called his Venezuelan counterpart Nicolas Maduro to make clear the incursion was “completely unacceptable.”

Maduro allegedly responded he had given the orders to remove the soldiers from Colombia’s Arauquita municipality.

Without recognizing Venezuelan troops had made an illegal incursion into a neighboring country’s territory, the country’s Foreign Minister Delcy Rodriguez said in a press conference that the natural shifting and morphing of the Arauca river could have caused the incident.

According to Rodriguez, these shifts of the natural border between the two countries had previously led to “differences in interpretation” of where the exact border lies.

The two neighboring countries have diplomatically clashed on numerous occasions, mainly over alleged activity of Colombian paramilitary groups in the neighboring country and Venezuela’s apparent lack of respect for its neighbor’s territorial sovereignty.

Earlier this year, a number of Venezuelan soldiers were arrested after driving into Colombian territory while allegedly chasing a criminal trying to evade capture by crossing the border.

In October last year, Colombian airliner Avianca temporarily suspended flights to Venezuela after one of its aircraft was intercepted by Venezuelan fighter jets.