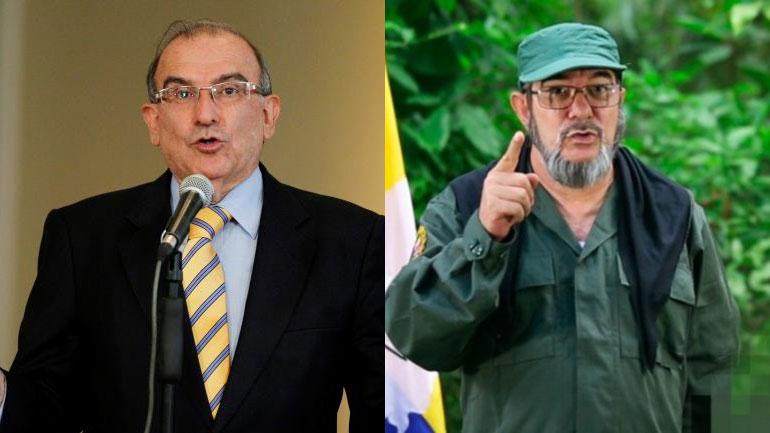 “With my express authorization, Humberto de la Calle met with him on two occasions, as did my brother Enrique on one occasion,” Santos said in an interview published Saturday by the newsweekly Semana.

He gave no details about those meetings, but EFE learned from a source close to the negotiations that they took place in Havana on the sidelines of talks between the government and the Revolutionary Armed Forces of Colombia, or FARC.

Timochenko, whose real name is Rodrigo Londoño, is not a part of the FARC’s negotiating team, although he has the status of a “representative member” of the insurgent group at the peace talks.

Asked whether he would meet with Timochenko during the three years remaining in his term to discuss peace process-related issues, Santos said he would if necessary.

He said the 51-year armed conflict is nearing an end and that the possibility of a bilateral and definitive ceasefire is growing.

“We have to arrive at a bilateral ceasefire. We initially rejected that possibility prior to a final agreement, because it (would have) provided a perverse incentive for prolonging the talks indefinitely,” Santos added.

That situation is changing, however, and if an agreement is reached in Havana on the issue of transitional justice (what penalties are to be handed down to war criminals), “we could agree on a ceasefire and a bilateral and definitive end to hostilities,” the president said.

“Doing so will avoid more victims. We’re approaching the end of the conflict.”

In late July, Santos ordered a halt to bombardments of FARC encampments, a move that came after the rebels declared a unilateral ceasefire earlier that month.

An earlier unilateral truce announcement by the FARC last December led Santos to halt the bombing of the guerrillas’ camps, but the peace process suffered a setback after 10 enlisted men and a non-commissioned officer died in a FARC attack on an army detachment in early April.

Santos said in reference to the justice issue that top FARC leaders must face punishments that involve “deprivation of liberty,” adding that it will be physically impossible to mete out custodial sentences to all rank-and-file guerrillas.

FARC negotiators, however, have repeatedly stated that they will not serve prison sentences for crimes committed during the decades-old conflict, saying that no group negotiates a peace accord only to end up behind bars.

Asked whether the transitional justice model that is applied to the FARC should also be used to punish crimes committed by government forces, Santos answered affirmatively.

“To definitively end this conflict, all those who committed war crimes must be tried” within a transitional justice framework. “That’s how we’ll bring this conflict to a complete close. Otherwise, it’ll be left open.”

Asked about how potential victim reparation by the FARC will occur, the president said that issue is being discussed because the guerrillas must “assume their responsibility, tell the truth, ask forgiveness, as the government has done (for paramilitary massacres).”

The economic formulas must include “money and land,” Santos said.