Peasant leaders at a meeting in Catatumbo (Photo: Notimundo)
News

Activists in the Catatumbo region have fallen victim to recent death threats and intimidation efforts by a neo-paramilitary group beginning to emerge in the area, according to human rights reports and witness testimony.

Jhony Ovalho, a farmer in the northern Colombian state of Norte de Santander, claims he was walking on his land when he was accosted by a group of unidentified armed men.

The strangers, who later claimed to be part of the “Aguilas Negras” (Black Eagles) neo-paramilitary organization and wore the black, eagle-crested uniforms consistent with the group’s usual description, reportedly blindfolded Ovalho and brought him to the top of a nearby mountain, where he was interrogated inside a campsite.

Ovalho was eventually released, reportedly because his name did not appear on a list the group had in its possession, but not before having live rounds shot at his feet. The man Ovalho perceived to be the group’s commander led him to believe that the list, reportedly five pages long, contained the names of various prominent social organizers involved in ongoing negotiations with the government.

Catatumbo was the site of long, intense demonstrations throughout much of the past summer, as farmers blocked roads in protest of the government’s coca eradication program, which they say is unfair and indiscriminately destroys entire crops. Ongoing negotiations eventually brought an end to nearly two months of protests, which featured heavy clashes between the government and protesters and left several farmers dead. 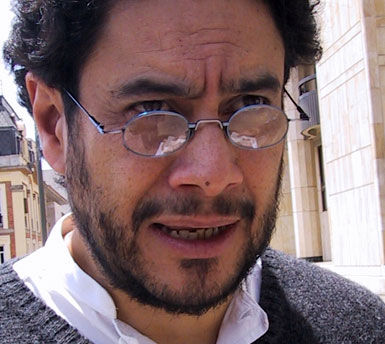 According to Congressman Ivan Cepeda, threats had been made against farm workers in the form of graffiti but never in person.

In an interview with Colombia Reports, Cepeda indicated that this is the first time neo-paramilitaries have shown a physical presence in “quite some time”.

“Understand, this is a region in which the military is very active,” said Cepeda, who publicly denounced the incident Wednesday. “That is perhaps the most curious and troubling part of all this. Where are the soldiers, and how did the paramilitaries get there with no one noticing?”

Catatumbo, he explained, is what is called a “consolidation zone,” an area the United States and Colombian governments have targeted for military stabilization and the development of social infrastructure.

“Too Early For Accusations”

“It is too early for any accusations,” said Cepeda, “but it is very strange to see paramilitaries active in an area with so many soldiers.”

The government, he said, “has a responsibility to protect organizers from these kind of threats, especially in the middle of negotiations. Safety must be a guaranteed part of any dialogue with the government.”

Cepeda will be meeting later today and tomorrow with other government officials to discuss what is being done to protect civilians and investigate paramilitary activity.

The negotiations, which began in mid-August, have yet to produce any formal agreement. Protesters are asking the government to suspend its use of pesticides, and subsidize the transition away from coca cultivation, which they claim is the only profitable form of agriculture in a region long dominated by drug cartels.