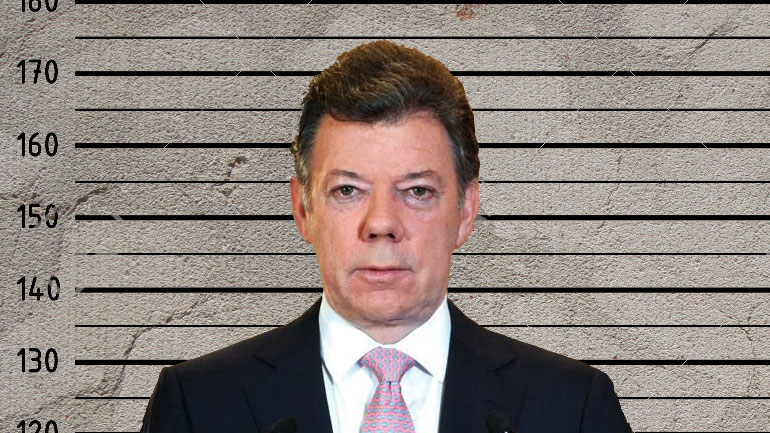 Weeks after the Colombian government and FARC rebels announced a “historic” deal on transitional justice, negotiators are still working on major issues, reportedly including a judicial exemption for former heads of state.

The deal was initially announced on September 23 already, but apparently not as final as the parties at the moment made appear.

While the FARC insisted that the deal was fine as agreed in September, the government later said it still needed adaptations.

According to newspaper El Espectador, a source close to the talks said the government is seeking to include immunity for former heads of state.

As commanders-in-chief, Santos and his predecessors could be held accountable for the thousands of war crimes committed by the military.

After Prosecutor General Eduardo Montealegre made this clear to Santos predecessor, former President Alvaro Uribe, the latter’s political supporters made sure that if Uribe were to be tried for war crimes, Santos would go down with him.

Both presidents are implicated in the executing of thousands of innocent civilians who were later falsely reported as guerrillas killed in combat, a scandal euphemistically dubbed “the false positives scandal.”

Uribe, a fierce critic of the talks, additionally is facing charges for his alleged ties to right-wing paramilitary groups that — like the FARC — are accused of thousands if not tens of thousands of human rights violations.

Santos had earlier said that a deal on justice was a condition for him to agree on a truce ahead of an eventual formal peace agreement.

According to El Tiempo, a newspaper with close ties to the Santos family, their source said the FARC’s attorney flew to Havana on Friday to sign off on the deal.

The president and FARC negotiator “Rodrigo Granda” have both challenged each other to agree to a bilateral ceasefire before December 16.

This deadline gives the warring parties little more than two weeks, not just to agree on transitional justice, but also the logistics of the FARC’s demobilization and disarmament.

The FARC have yet to agree to surrender their weapons in the event of a demobilization.

In order to speed up the talks and meet the set deadlines, Santos sent his brother to Havana last week to personally meet with FARC chief “Timochenko.”

Santos and Timochenko said later they both were in favor of a conclave that would force their negotiators to continue negotiating without the habitual breaks in order to speak up the talks.

The talks began in November 2012 and have since resulted in agreements on a far-stretching rural reform, the FARC’s political future and the rebels’ abandoning of drug trafficking, one of their main sources of income.

However, deals on victims and the end of conflict are still on the table and, according to El Espectador, with still quite some controversial issues to agree on.