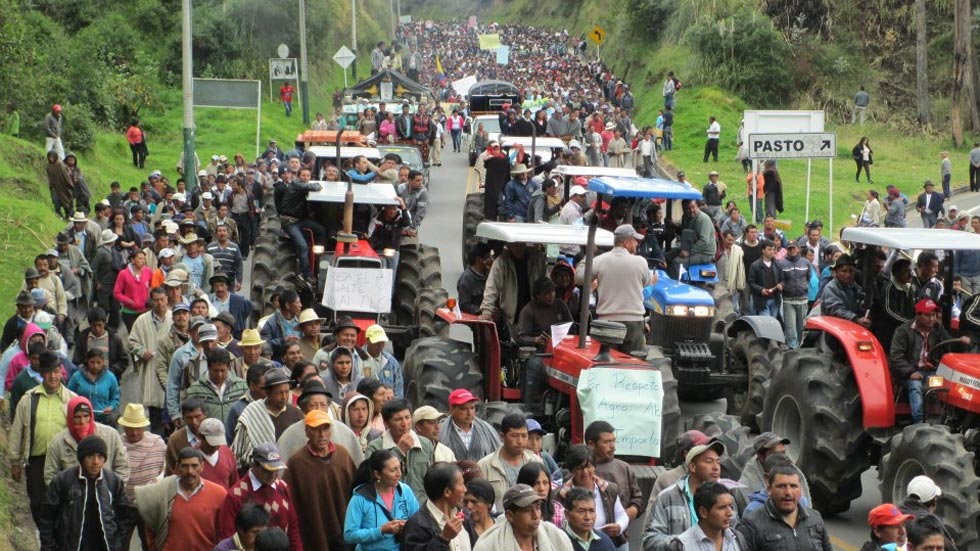 After more than 10 days of major social unrest in Colombia’s countryside, the government and protesters have yet to agree to formal talks as a possible escalation of violence looms.

Protesters believe the Colombian government has failed to deliver on promises to alleviate rural poverty made following similar protests in 2013 that left dozens dead.

A recent government report said that this year already more than 100 rural children, mostly indigenous, have died of malnutrition.

A week ago the Colombian government sent a commission of ministers to La Maria, Cauca, to negotiate with indigenous communities and stop the ongoing strike.

However, since then the scale of the strikes has only grown.

Negotiations have yet to move beyond preliminary talks and on Tuesday the ACC, the Colombian truck drivers’ union, announced that it would join the ranks of the protesters.

Protest groups put the number of participants in the strikes at over 100,000, whereas government sources suggest it is in the region of 30,000.

Progress in talks between the two parties has been hindered by misinformation and disagreement over where to hold the national negotiations.

The Minister of the Interior, Juan Fernando Cristo, insists that dialogues have been opened with the groups of protesters, but that they have rejected Bogota and Cali as places to set up the table of negotiations.

However, Cumbre Agraria, the organisation of protest groups, is holding out for national negotiations with indigenous groups at La Maria and Afro groups at Quinamayo, also in Cauca.

The government made a counterproposal for talks in Cali and La Maria, but not Quinamayo, aggravating Afro groups who have described it as racist, according to Colombia Informa.

According to Aurelio Iragorri, the Minister of Agriculture, efforts to establish formal negotiations have been held back by the lack of unity among the various communities involved in the strike.

Whether that is true or not, the government appears to be trying to sow discord among the protest groups, in particular by driving a wedge between the indigenous and Afro communities.

However, the government has also been trying to negotiation with regional groups alone.

On Wednesday, government sources reported that a pre-agreement had been made to gradually lift the roadblock on the Pan American Highway so that food and medical supplies can reach Popayan and the southwest of the country.

However, the roadblock is still in place, impeding imports and exports from Ecuador.

The government appears to be trying to divide and conquer the Cumbre Agraria rather than entering national negotiations, a similar approach as in 2013.

The longer this stand-off continues, the higher the risk of more violence and even food shortages in cities like Bogota and Medellin.

After the 2013 protests the government altered the law to prohibit the obstruction of public traffic, which is a powerful tool for demonstration in remote regions.

Nonetheless, roadblocks have been established.

Protesters fear a brutal response from the notorious ESMAD riot police and the military, and they have sought international protection to prevent more bodies being added to the three fatalities so far.