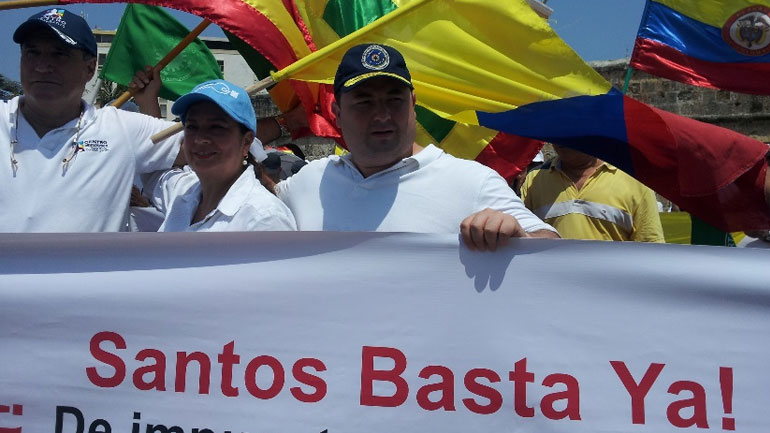 Hundreds of taxi drivers from across Colombia arrived late Sunday in Bogota to protest taxi app Uber. They will be joined by labor unions, students, miners, truckers and farmers on Wednesday.

The protests will not just be held in the capital city, but throughout the country and for a variety of reasons.

While the taxi drivers want the government to ban Uber, the remaining organizations plan more general protests in defiance of the economic policy of the administration of President Juan Manuel Santos.

The government has been forced to impose austerity measures because of dropping global oil prices and is facing imminent energy blackouts because of ongoing drought, corruption and technical failures at some of the country’s most important power plants.

The protests are likely to further undermine Santos’ popular support; the president is already suffering one of the lowest approval ratings since pollsters began measuring Colombians’ opinion on their political leaders.

Moreover, the level of anger among protesters about Uber, the sale of one of Colombia’s largest energy providers only weeks ahead of the energy crisis and disappointment about a loss in purchasing power for workers could provide the perfect storm facing Santos.

Additionally, protests of this scale in Colombia have the potential to escalate in violence, as demonstrated on Sunday in Bogota when police was forced to flee dozens of taxi drivers.

Moreover, striking taxi drivers have been threatening colleagues who refuse to strike and have forced passengers to abandon their ride. Some media reported that taxi drivers have also been puncturing tires of Uber-affiliated cars.

The last time an accumulation of strikes similar to the one expected this week occurred, dozens of protesters were killed in violent clashes with riot police when protesters began blocking streets.

According to local media, the taxi drivers currently protesting in Bogota have already begun blocking important roads, setting a hostile, anti-government precedent for what can be expected later this week.