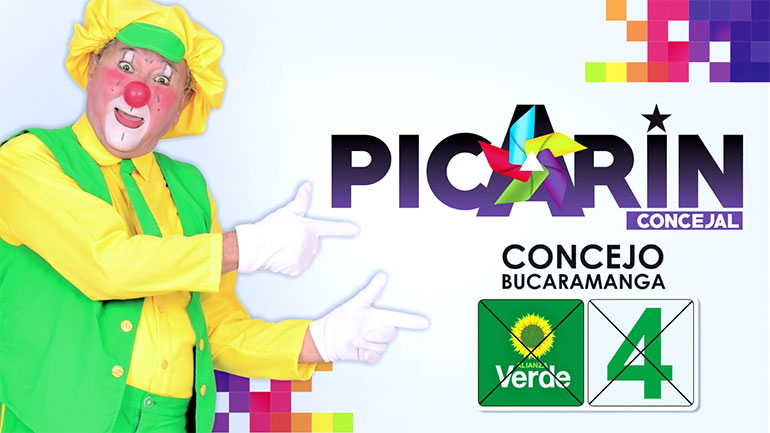 Colombian election candidate admits to being a clown

After 45 years in the clown profession, “Picarin” has chosen to keep his stage-name while running for the local council in the northeast Colombian city of Bucaramanga.

Jose Fernando Forero, aka “Picarin the clown” is running for a position as a local council member of Bucaramanga, the capital city of the northern province of Santander.

“With the clown profession I have always brought joy to the city of Bucaramanga and I want to continue doing that, working for the children, because without children there would not be clowns and thanks to them I always had work,” says Picarín, who has campaigned for the Green Party against corruption.

Contestants also include a bare-chested Cartagena socialist, running either as the South American version of Russian President Vladimir Putin or in recollection of this year’s draft filed for the ban of shirtless tourists in the city center, reportedly in representation of austerity and freedom.

Shirtless protesters fight draft to cover up in Cartagena

A LGBT community favorite whose slogan is “We are not male [macho], we are many [mucho]” has successfully turned what initially started as internet trolling into a viral frenzy, elevating the liberal’s popularity. Julian Peinado of Envigado has ditched his comb-over, embracing the baldness which is reinforced in campaigning by his surname Peinado, meaning hairstyle, despite a lack in financial support now shining against his competitors.

These individuals are rapidly gaining popularity across social networks and providing an element of comical relief in the electoral process typically characterized by fraud and violence.

Electoral observers have warned last month that 20% of Colombia’s municipalities are at risk of violence or fraud. Violations of freedom of the press, risk of forced displacement, political violence against elected and running candidates, and the active presence of illegal armed groups constitute violent risks, while spoiled ballots, blank votes, anomalies in levels of voter registration encompass the category of electoral risk.