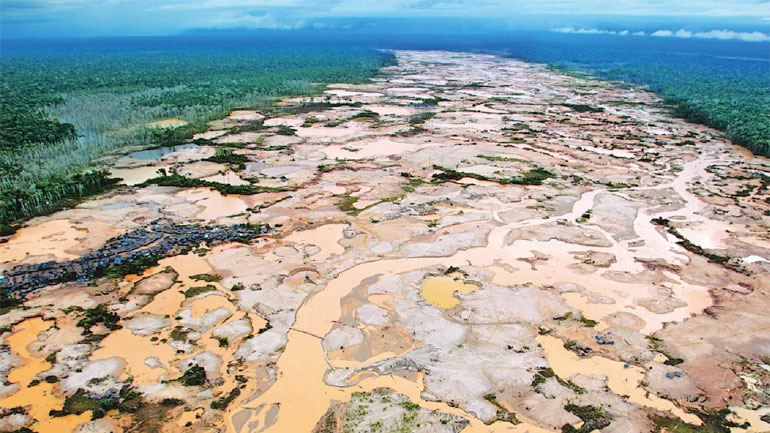 Colombia’s President Juan Manuel Santos on Thursday declared a war on the $2.5 billion illegal mining industry in the country.

“Illegal mining is causing us more harm than other enemies” the president said. “When we compare what criminal gold mining produces, it is much more than the production of drug trafficking.”

Criminal mining by illegal groups, namely the country’s leftist rebel forces and criminal neo-paramilitary gangs is reportedly used to fund the expansion of such groups.

In response, Santos has asked the nation to unite with him, declaring a war on this practice. He has charged the Defense Ministry responsible for the attack of this source of financial aid of said criminal organizations.

He additionally announced a new bill to be drafted in the coming days to increase the penalties against the criminal trade and a strategy to tackle this illegal behavior to be released this Friday.

The bill that will go to Congress with a request of urgency in its processing will include giving higher powers to police, enabling them to close illegal mines and seize products such as gold when their origins cannot be justified. Penalties for those involved in the activity will include up to 30 years of imprisonment, equating the severity of the crime with practices of conspiracy and money laundering.

In the interim before these laws are passed he plans to intensify Armed Forces patrolling these regions. He also reported the creation of an Army brigade designed to combat illegal mining.

The President noted that the western province of Antioquia is a focus as has a large amount of mercury contamination discovered in fish in the region, as a result of the use of chemicals in the mining processes.

As well as providing financial aid for the growth of these networks mining of the Colombian territories is responsible for extreme damage to the environment and endangering of many species of flora and fauna. In 2014, 16,784 hectares of land were reportedly forested for illegal mining according to the Integrated System for Monitoring Illicit Crops (SIMCI).

The Santos administration announced earlier in July that over 1.6 million hectares of Colombian land were to become national parks, in a move to conserve ecosystems from the destruction of miners. During the two years it will take to establish these areas of conservation heightened levels of security will be sent to these regions.

“We are the richest country in biodiversity, so we can not allow this criminal mining to kill our ecosystems. The negative and harmful consequences that of this activity, we must fight” reported the head of state.