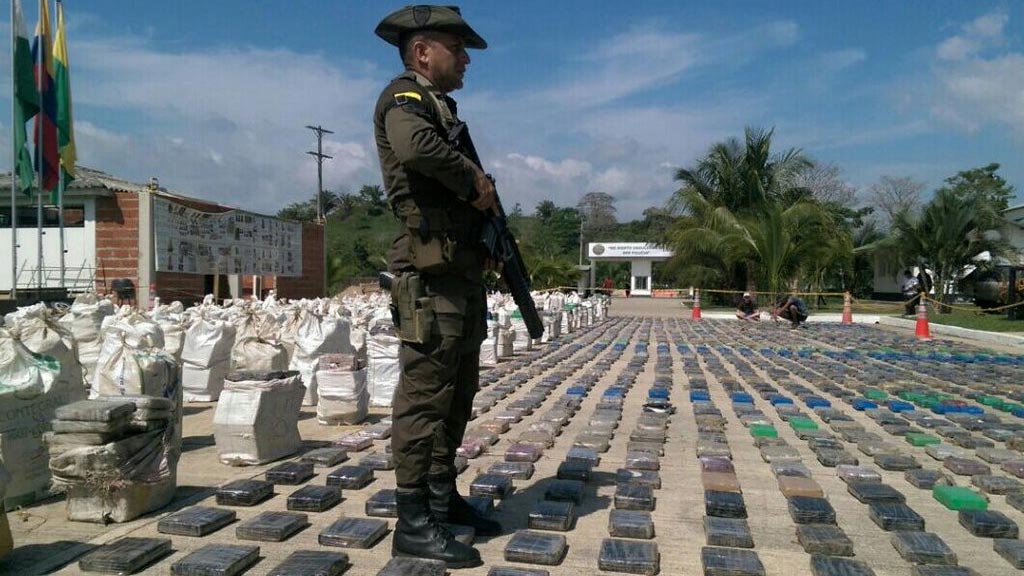 Colombia’s authorities said Sunday they had seized eight metric tons of cocaine, claiming it was the biggest cocaine bust in the history of the country.

The drugs were seized in Turbo, a port city in the heart of Uraba, the region from where the neo-paramilitary group “Los Urabeños” operate.

The cocaine allegedly belonged to the drug trafficking group, the second largest illegal armed group in Colombia after the left-wing FARC rebel group.

The drugs were found in a banana farm just outside the port city when some 50 members of Colombia’s special forces, supported by two Black Hawk helicopters, raided the building.

The drugs were hidden in a six-feet deep underground shelter measuring 21 by 11 feet that had been covered with cement, the National Police said.

The mass shipment allegedly belonged to “Gavilan,” a former member of paramilitary organization AUC, who followed his now-superior “Otoniel” to join the Urabeños in defiance of the paramilitaries’ demobilization between 2003 and 2006.

According to authorities, the record-breaking seizure added to what was already a record-breaking first four months of the year, during which 87.5 metric tons of cocaine were seized.

The area around Turbo has been the scene of the biggest manhunt since Pablo Escobar as state agents are trying to find Otoniel or second-in-command capos like “Gavilan.”

The Urabeños, or Gaitanista Self-Defense Forces of Colombia, have been sowing terror along the Pacific and Caribbean coastlines of Colombia where the neo-paramilitaries ship the drugs to allied Mexican drug cartels for consumer markets in the United States and a myriad of organizations responsible for distribution in Europe.

The group frequently clashes with leftist rebel groups FARC and ELN, that also have a stake in the drug trade.

Last week, the UN announced that the violence fueled by the criminal rivalry has displaced more than 6,000 from the Pacific region of Colombia in the past few months alone.

6000 displaced and 7000 trapped amid fighting in western Colombia