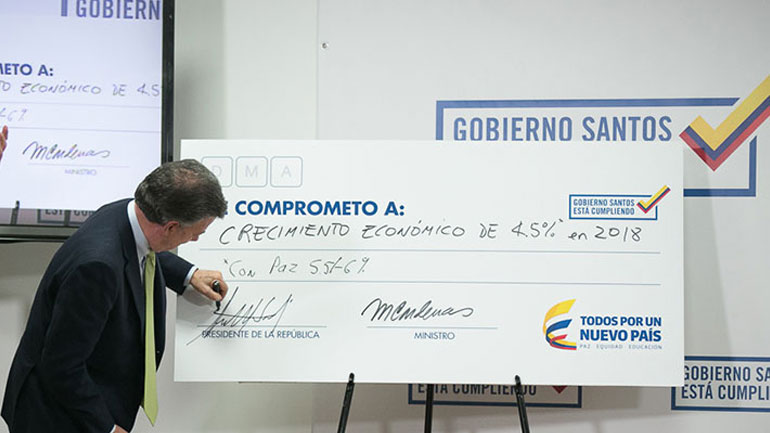 Colombia’s government hopes that “intelligent” austerity measures proposed for 2016 will curb an ongoing economic slowdown and push GDP growth to 4.5% in 2018.

According to President Juan Manuel Santos, the economic growth target for 2018 could end one or one-and-a-half percentage points higher if peace is reached with leftist rebel groups like the FARC and ELN.

Santos and his finance minister, Mauricio Cardenas, presented the administration’s economic plans for the remaining three years in office in Bogota on Tuesday.

“Today’s economy, like other economies in the region, is facing a temporary, international storm” due to a major drop in energy prices over the past year that has caused a slow-down of many of Latin America’s economies dependent on fossil fuel extraction, said the president.

Santos proved secure about the benefits of his economic policy, claiming that, due to the saving of oil revenues in the years past, “we could be in the strongest position of all Latin America.”

The president said that the recovery of growth in the coming years should be translated to a growth in GDP per capita and felt by the population.

“The 4.5% growth must be accompanied by what we have achieved so far. Let is be a healthy growth that generates employment at the same time,” said Santos.

Since taking office five years ago, Santos has carried out an economic policy that aimed a growth while reducing unemployment and poverty levels that are among the highest in Latin America.

The finance minister said that the government hoped to continue paying for social investment programs through “intelligent austerity measures,” particularly in 2016.

“Intelligent austerity means an adjustment in spending with a social priority and support for the private sector to stimulate investment,” Cardenas said at a forum organized by US news network Bloomberg.

The government is hoping for major foreign investment in announced road infrastructure projects that seek to increase the competitiveness of domestic trade and exporters.