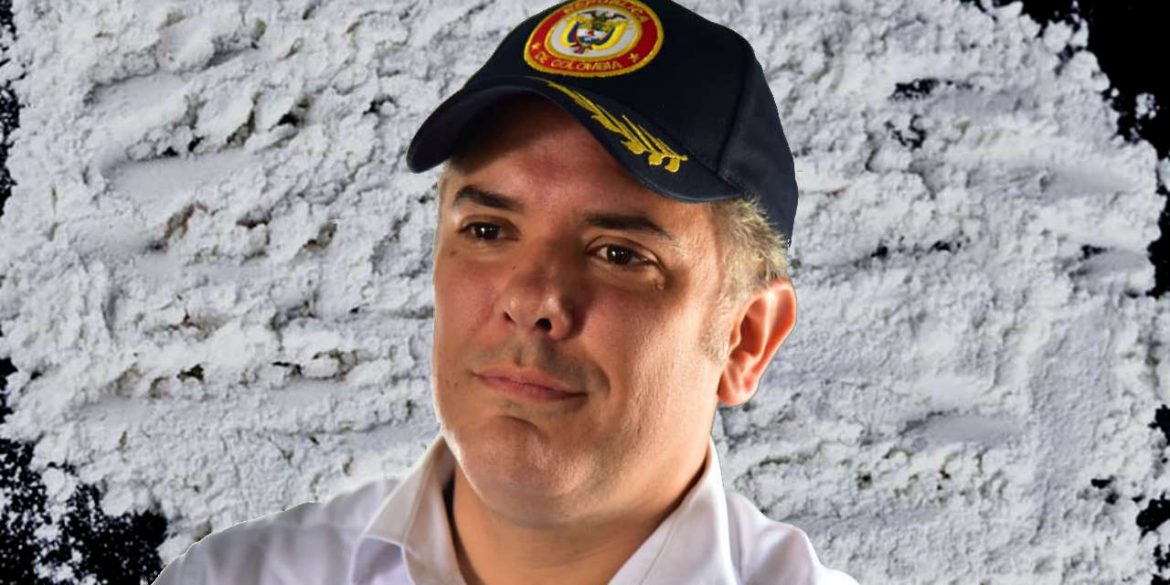 Colombia’s president-elect Ivan Duque wants to aggressively combat the production of cocaine, but will it have an effect other than violence?

Duque and Martinez both support an aggressive anti-drugs policy and will be in charge of Colombia’s biggest-ever drug production problem; coca cultivation reached a record 188,000 hectares in 2017 to illegally cater a global market of more than 17 million annual cocaine consumers.

According to the United Nations Office on Drugs and Crime, his policies have been proven more effective in other. Delays in the peace process, however, disallowed implementation last year. The long term plan has barely had time to present results.

Unless Duque further defunds these initiatives their allegedly long-term effects will only become visible in years.

Elected governments are not know for their long-term planning, they need results before the next election cycle.

Duque is with Trump

Duque said Saturday that he “shared opinions in terms of security” with the administration of US President Donald Trump after a phone call from his vice-president, Mike Pence, on Friday.

Trump last year threatened to “decertify” Colombia as a partner in the United States’ so-called “War on Drugs” over the South American country’s failure to lower coca cultivation statistics. 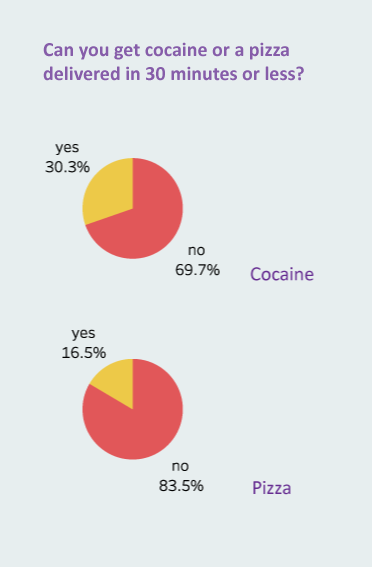 The human cost of the current drug policy could not be justified, according to the outgoing president.

But unlike Santos, Duque appeared entirely in sync with with his soon-to-be counterpart in Washington DC.

The US’ war on drugs celebrated its 47th anniversary earlier this week, and is suffering devastating defeats.

The increased consumption of drugs in general, including cocaine, is a global trend, according to the UN’s 2017 World Drug Report.

Santos wanted a global strategy for a long-term reduction in drug use, which presumably will always exist. So would crime associated with illegal exports, Santos argued.

Santos frequently has lambasted the US’ war on drugs and has called on the international community to rethink global strategies against drug abuse and transnational crime.

The way in which the war against drugs is being waged is equally or even more harmful than all of the wars being fought in the entire world today, combined… And it’s time to change our strategy.

But Santos’call for a reconsideration is likely to perish soon.

Conservative by nature, both Duque and Trump are reluctant to identify drug use as a public health issue.

Authoritarian as they are, both Duque and Trump have been open to the use of force to impose state authority.

Martinez and Duque seem to prefer attacking the south of the country where more than 100,000 families are sometimes threatened to live off coca.

Washington and the incoming administration in Bogota seem to agree on the return of something like “Plan Colombia,” the strategy that cost American tax payers $10 billion and countless Colombians lives without producing any result.

They even mentioned the return of the highly controversial aerial fumigation of coca-growing regions, which was banned by the Health Ministry in 2015 over public health concerns. 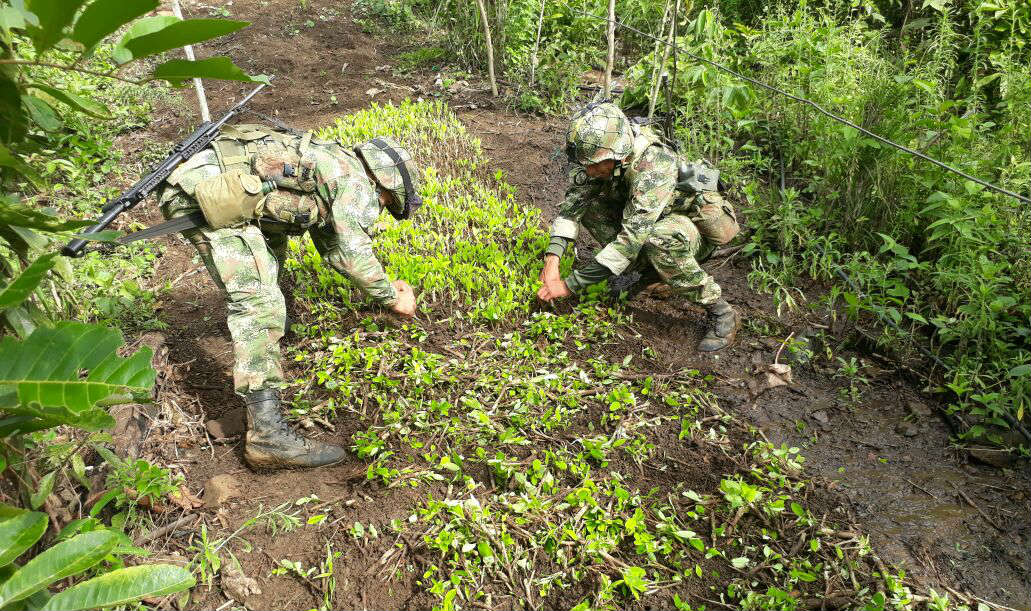 The manual eradication of 1800,000 hectares of coca is also barely solution. As many as 11,000 soldiers manually eradicate coca.. Dozens have been killed by landmines. (Image: National Army)

The president-elect and Prosecutor General seem to want to move away from Santos’ strategy to primarily use state-building, economic development and crop substitution to combat cocaine cultivation and other illegal activity.

According to the United Nations Office on Drugs and Crime, such development strategies are proven to be most effective to reduce illicit crops.

Santos’ development strategy, however, is partly failing because the government lacks the capacity to exercise control in the remote regions where most coca cultivation is taking place.

Drug traffickers in particular oppose the new counter-narcotics policy. According to the federation of coca growers, more than 200 farmers were murdered for participating in or promoting crop substitution programs. 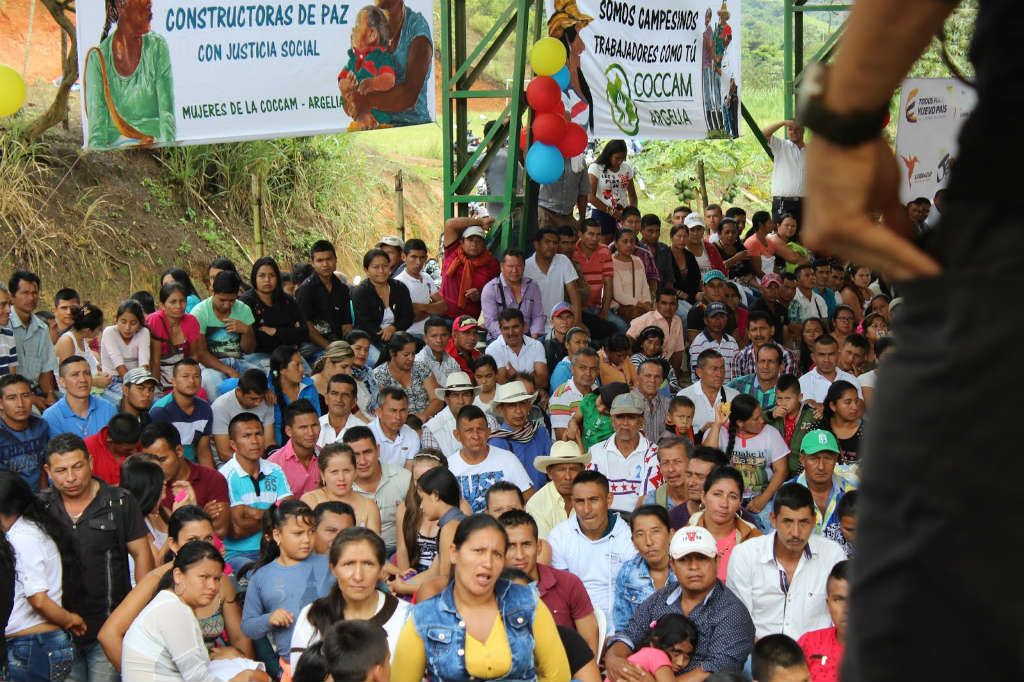 Local communities en mass have expressed their preference to remove their coca, but fear retaliation from the drug traffickers. (Image: COCCAM)

o make matters worse, the US has resisted cooperating with the UN-monitored program (that reintegrates former FARC members into the legal economy through farming alternative crops) because Washington DC continues to consider the FARC a terrorist organization.

European countries also failed to financially support crop substitution and rural development, leaving farmers with no other options than to continue growing coca or starve.

Whether Duque is willing to continue to invest in the counter-narcotics chapter of the peace process is uncertain.

Many of the new government’s allies are powerful regional elites with little interest in any development derived from the peace agreement.

The return of aerial fumigation?

Both the chief prosecutor and the president-elect are in favor of the resumption of the highly controversial aerial fumigation of coca.

The practice was banned in Colombia in 2015, but could be revived in a less brutish form, using drones instead of manned aircraft that kill virtually all vegetation in the vicinity of a targeted coca field.

This would reduce collateral damage on the environment and public health, the National Police reportedly believes.

It would not, however, prevent sometimes desperate protests of poor farmers whose livelihood is destroyed.

Duque previously proposed to obligate newly recruited soldiers to spend the first three months of their obligatory military service removing coca by hand, an extremely dangerous task because of landmines.

Experts have urged against offensive operations by the public forces, especially the military, against farmers, many of whom struggling to feed their families. Illegal armed groups would feel encouraged to “protect the population” and the illicit activity and, again, effectively remove the state from these often-neglected regions.

Going after the machine

In his speech, the president-elect said he wanted to maintain the current government’s priorities to combat the higher echelons of the drug trade — the cultivation of coca is the least profitable chain in the transnational drug trade.

Both Duque and Martinez also vowed to curb corruption, which is not just crippling the state’s ability to fight crime, but also to offer basic public services in remote regions that could generate legal economic development.

The proposal for a more hard-line approach on coca cultivation is likely to generate social unrest and violence, especially if the government continues to fail to keep commitments made to families taking part in the peace process.

At least 10 people have already died in clashes when security forces wanted to forcibly eradicate coca despite community agreements with government representatives to substitute the crops and voluntarily remove the coca.

The power vacuum created after the demobilization of the FARC — the group that effectively was the authority in more than a quarter of the country — has generated an imminent security crisis that puts both civilians and authorities against the wall.

Coca cultivation is higher than ever and a multitude of dissident paramilitary and guerrilla groups, ELN rebels and organized drug traffickers are violently imposing their order in former FARC territory.

The abundance of cocaine, together with the control over other commodities, can easily fund a new wave of violence. Homicides in the first quarter of 2018 were up 9% compared to the same month last year.

Duque’s policy to support wealthy land-owners that refuse to return stolen land to their poor displaced neighbors appears to go against attempts to promote legality and a rule of law. Many of these land disputes are settled with deadly violence.

The outgoing president, who won a Nobel Peace Prize for his 2016 peace deal with the FARC, spent much of his eight years in office lobbying the international community for a different approach to drugs, but to little effect.

Duque, unlike Santos, has not stressed that global drug consumption must be addressed to effectively and lastingly reduce cocaine production in the Andean region.

Neither Duque nor Santos have barely dared to touch the part of the peace deal that obligates the state to execute the rural land and political reforms considered crucial to allow a legal rural economy and curb drug trafficking, but vehemently opposed by the clans.