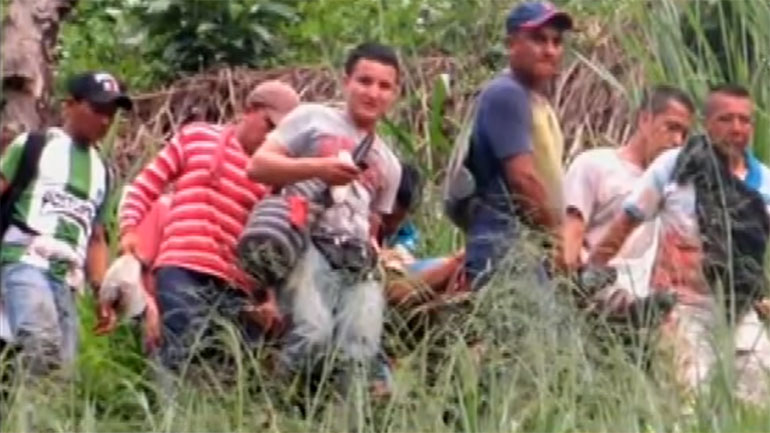 Coca farmers in the southwest of Colombia clashed with members of the national army and eradicators of illicit crops on Thursday, leaving at least five civilians injured and one dead.

The incident occurred in the municipality of Argelia, where a truck transporting troops of the 29th Brigade of the Army and officials from the manual eradication program was set on fire.

The army confirmed that the protesters who had set fire to the truck “are inhabitants of the sector who closed the road and proceeded with the incineration.”

The army opened fire at the protesters, according to a video released by rural rights activist website Prensa Rural.

Tensions spiked on Thursday after the arrival of military forces and eradicators provoked fierce backlash in the community, which states that the illicit crops represent its only source of income.

Ever Molano, government secretary of the municipality, stated that the climate of tensions felt within the population increased Wednesday afternoon when a captain of the army and two soldiers were injured by a landmine, about an hour from where the riot broke out.

Following the Wednesday explosion, the eradication operations were suspended for a day. When the manual eradication of the crops resumed Thursday morning, direct clashes between the state authorities and the local community erupted.

“The people have confronted the Public Forces … so far there is one dead and five injured,” stated Molano.

As of now, more than 100 Cauca residents stand against the public forces, according to El Tiempo. The community opposes the installation of military bases and the police, fearful that their presence will lead to violent confrontations with subversive groups and put locals in risk of getting caught in the crossfire.

The heavy security force presence seen in the southwest region of the country has been implemented in the name of the government’s plan to eradicate illicit crops.

In mid-October, the Colombian military stated in a press release, “Under the manual method, the troops of the 29th Brigade have eradicated more than 380 hectares of illicit crops in the province of Cauca so far this year.”

The Office of the United Nations against Drug and Crime stated in a July report that the southern departments of the country — Nariño, Cauca, Putumayo and Caqueta — constitute the main challenge in the problem of cocaine production.

The UN report additionally described the convoluted dynamic between the community and the state authorities, the root cause of Thursday’s riots, in these four departments.

“There exists not only the majority of coca crops (73%), but also very strong conditions of vulnerability that limit the trust of the communities in the State,” the report stated.

In Havana, the Colombian National Government and the FARC guerrilla group came to an agreement on an illicit crop substitution plan as a part of the continuing peace talks.

In September President Juan Manuel Santos announced that the Comprehensive Strategy for the Substitution of Illicit Crops discussed during the peace negotiations with the FARC will be implemented in the southern provinces of Putumayo and Nariño this year.

The substitution strategy seeks to reach agreements with the communities to voluntarily eradicate their illicit crops, but if agreements fail, authorities will otherwise enact forced eradication.

In Cauca, the state forces continue efforts to eradicate the coca crops and other illicit farms, with or without the support of the local communities.