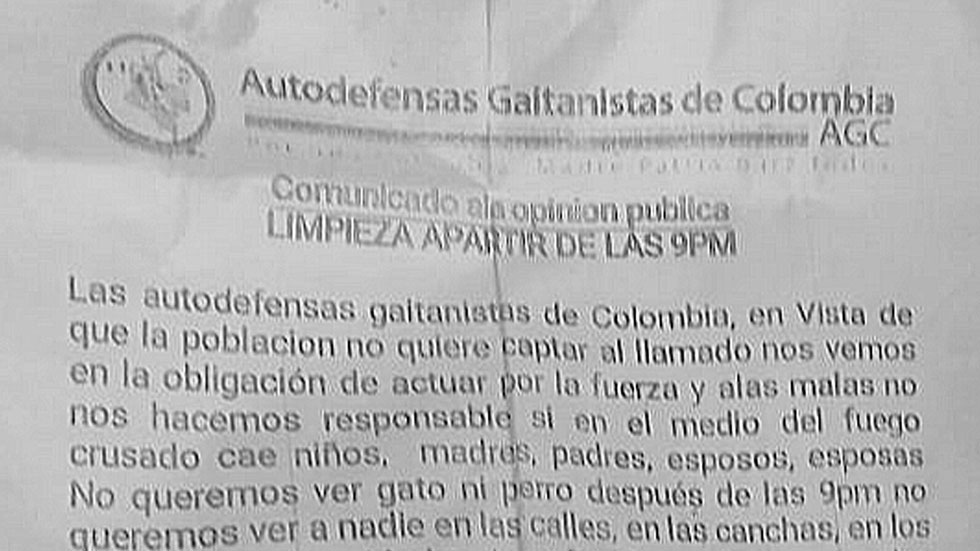 While some 7,000 FARC guerrillas are still in rural camps while they demobilize, disarm and reintegrate under a peace deal with the government, the AGC in those areas announced a social cleansing and a 9PM curfew while confirming their intention is “to control, organize and recuperate territory from the FARC drug traffickers.”

The pamphlets are the latest demonstration of the AGC’s extensive power that has been steadily growing since their formation in 2006.

On Friday, newspaper El Espectador reported a pamphlet signed by the group in Guaviare, a central province long considered FARC heartland until the group’s peace agreement in November.

“We have arrived in Guaviare to control, organize and recuperate territory from the FARC drug traffickers. We will first do a social cleansing.

Apart from threatening to kill anyone considered undesirable by the group, the AGC imposed a 9PM curfew that would be imposed by lethal force.

After 9PM we don’t want to see anyone in the streets, on the pitches, in school, university. Employees leaving work late, we don’t care. We will kill any son of a bitch fucking around in the streets. Since the community didn’t want it the nice way, we’ll have to do it the bad way.

The department is home to two of 26 FARC demobilization camps where the guerrillas are kept under supervision of the United Nations.

In the same province, the military has been accused of promoting the local FARC guerrillas to abandon the peace process. 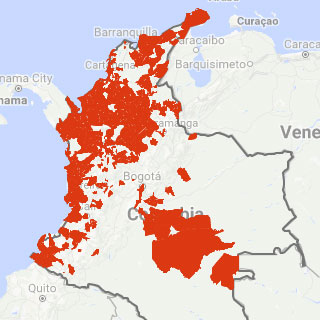 The AGC has been moving troops from its home turf in the northwest to central Colombia since before 2014, but has maintained a low-profile in the region while the FARC was still in arms.

News website Pacifista reported that pamphlet similar to the one in Guaviare had appeared in other abandoned FARC territories.

In some of these areas, there had not been previous reports of AGC activity.

For example, in Putumayo, on the border with Ecuador, the AGC imposed the same curfew as in Guaviare while this group was not known to be active outside the capital Mocoa. 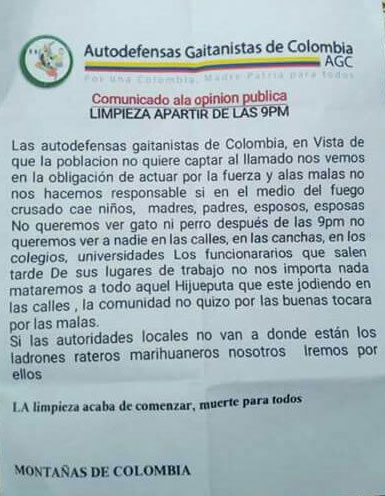 Last week, the pamphlet was also distributed in the southwestern Nariño province where the paramilitary group was fighting the FARC until the guerrillas signed a ceasefire with the government in September last year.

Local media reported similar AGC pamphlets in known areas under their influence in Antioquia and Santander.

Additionally, coalition senator Armando Benedetti (U Party) told newspaper El Colombiano that “the paramilitaries are offering up to $600 (COP1.8 million) to the rank and file guerrillas. In the same sense, front commanders have received offers reaching $3,400 (COP10 million).”

“Paradoxically it has been the state that has been most behind in following up on the agreed term to provide judicial, physical and economical security to the agreement” for peace signed with the FARC in November.

Following an apparent increase in the killing of community leaders and the appointment of former National Police chief General Oscar Naranjo as vice president, the military appears more active in trying to stop the AGC’s expansion.

Local officials from Putumayo and Nariño told Colombia Reports the military’s imposition of state control over the long lawless areas has been “slow” and “inefficient.” The AGC, however, told this website last week that pressure from authorities was “increasing.”

The AGC are Colombia’s most powerful drug trafficking organization and the primary remnant of the AUC, a paramilitary umbrella organization that largely demobilized between 2003 and 2006.

While the group has consistently called to be included in the peace process, the government have persisted in rejecting this, claiming the paramilitaries has their chance between 2003 and 2006 and are drug traffickers, rather than a party in the country’s armed conflict.