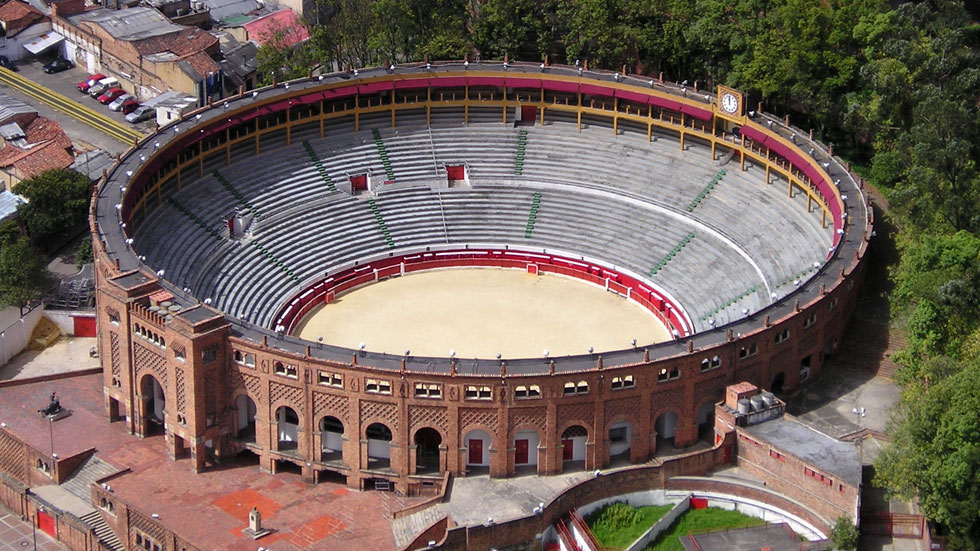 Bullfighting is still very much a thing in Colombia

There were violent clashes between protesters and police in Colombia’s capital Bogota on Sunday as bullfighting returned to the capital after a two-year ban.

Protesters took to the streets screaming slogans such as “Assassins, assassins!” and “No more Ole Ole!”as they blocked the entrances from the Planetarium district near the National Museum amid the presence of a 1,200 man police operation put in place to “guarantee the constitutional right of [bullfighting] fans.”

Authorities reported that there were 18 arrests as the crowd of predominantly young protesters confronted Colombia’s anti-riot police ESMAD with insults, eggs, rocks, pieces of brick, sticks and bottles, according to reports from El Tiempo.

The return of bullfighting came after a constitutional court over ruled the city mayor’s 2012 ban on the sport, much to the jubilation of 10,300 bullfight enthusiasts who packed the Macarena in the nation’s capital.

“It is the triumph of culture and tradition. It was lamentable the drought of the runs in Bogota. We respect those who oppose, but we demand the same respect towards us,” said Rafael Oliart from the Bullfighting Center of Lima who traveled from Peru to see the return of the bulls, reported El Tiempo.

Colombia’s constitutional court lifted the ban on bullfighting in Bogota which was imposed by former mayor Gustavo Petro three years earlier citing that the sport is “an artistic expression.”

The presence of a majority of young people amongst the protesters reflects a deep social division between older, wealthy, conservative members of Colombian society who enjoy the tradition and radical, young animal rights activists.

“Everyone you see going are old, conservative elites,” said David Saitru, a 17-year-old protester dressed in black to mourn what he considered the barbaric killing of the bulls reported ABC News.

“My generation thinks differently. We are not prepared to see animals suffer,” added the protester.

Bogota’s major Enrique Peñalosa said he agrees with animal rights activists and considers bullfighting a “cruel spectacle which is not part of a civilized society” but he said that he had no choice but to enforce the court’s decision.

The issue of bullfighting continues to arouse controversy throughout the seven or so countries where Spanish-style bullfighting is still practiced with Spain’s Constitutional too over ruling a ban, arguing that it is an important part of Spanish heritage.

Bullfights in this style consist of three “tercios”, or stages, in which the bull first endures repeated stabbings from horsemen wielding lances; then piercings by “banderilleros” carrying colorfully decorated, barbed sticks called “banderillas.”

In the final stage, the “tercio de muerte,” the matador aims to kill the bull by piercing its heart with a sword thrust between the shoulder blades.

The 2012 ban in Colombia caused widespread debate with some Bogota bullfighters going to the extent of hunger-strike amid support from fellow professionals in Mexico and Spain.

Attendances at bullfights had been in decline before the ban due “to growing international awareness of animal-cruelty issues, as well as rising ticket prices, a lack of innovation in the sport, and films that make animals seem like human characters” claimed the Atlantic magazine in 2015 based on interviews with fans.

Sunday’s clashes however reflect the deep divisions within the Colombian public regarding the issue with animal rights protesters claiming that they will continue to lobby for a complete nationwide ban on the tradition.

“We believe it is a political, social, cultural and normative setback for all Colombians, but also a challenge for us animal advocates,” said Andrea Padilla, a spokeswoman for the organization Animanaturalis to local media.

“We had a fight for freedom and the right to work, which are pillars of our democracy,” Felipe Negret, head of Bogota’s Bullfighting Corporation, told El Tiempo newspaper.

The Colombian case is just one example where lawmakers are pressurized by groups of activists to take action in relation to the issue of bullfighting.

Ecuador hasn’t banned fights altogether, but the capital city of Quito no longer permits killing the bull as part of the event.

France, too, has stopped short of banning bullfights, but a french court ruled in 2015 that bullfighting should be taken off the country’s cultural-heritage list.

Debating the issue in relation to the  Colombian context, El Espectador newspaper columnist Julian Lopez de Mesa alluded to the struggle between the traditional place of bullfighting in Colombia’s heritage and the emergence of younger generations who are promoting animal rights.

Bullfighting is the battlefield of two value systems that are seemingly mutually exclusive: On one side is the undeniable cultural heritage of Hispanidad [the Spanish]; on the other hand are the newest animal rights and ecological and environmental values whose importance has increased over the past decade. We are at a crucial moment; a moment that almost never occurs so brutally. We are witnessing the disappearance of a tradition, questionable or not, but after all, a cultural tradition that for many years has been part of being Colombian.”