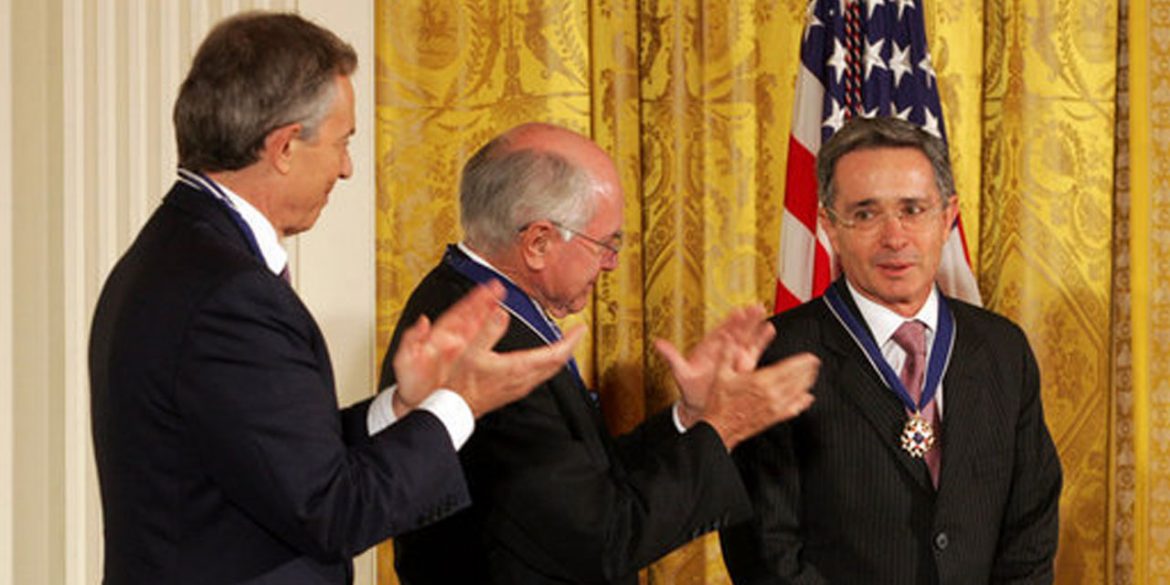 While British military intervention in Colombia between 1989 and 2010 was justified within the context of the “war on drugs”, it sponsored the destruction of barriers to British capital accumulation.

This is a relatively unknown chapter in British history, representing a recent case of British imperialism and a rare example of British intervention in Latin America.

For over half a century, a war against Colombian civilian life has been waged alongside the war against Colombia’s guerrilla insurgencies. The context of this counterinsurgency conflict, also known as the “dirty war,” is vital to understanding the nature of British involvement in Colombia.

Accordingly, US counterinsurgency manuals stated that “civilians in the operational area” such as trade unionists, students, and community organizers could be targeted with “guerrilla warfare, propaganda, subversion, [… and] terrorist activities.” This tactic became known as “quitarle el agua al pez,” or “draining the tank” to catch the fish.

Much of the violence perpetrated against Colombian civil society was outsourced to paramilitary groups, who received the Colombian state’s tacit and active support by way of arms and personnel exchanges, information sharing, and legal protection through official impunity.

The arming of civilian paramilitary networks, also upon US counterinsurgency instruction, gave the state a degree of plausible deniability for political violence. Paramilitary groups later became known as the “sixth division” of the Colombian military.

The targeting of armed and unarmed social forces in Colombia was consistent with US post-war objectives of containing any threat to a set of global relations favorable to US interests. While the official pretext for US intervention across Latin America was to confront Soviet expansionism, the secret record demonstrates that wider economic concerns governed US policy.

If Latin American states could successfully reorient their economies away from US control, it was feared that a precedent might be set for other states to follow suit (the real “domino effect”).

Whether communist or not, Latin American states pursuing independent economic development were therefore considered threats to US hegemony. The threat of international communism, nonetheless, provided a key propaganda service in justifying US aggression throughout the Third World.

US-sponsored political violence in Colombia was therefore one facet of a wider policy of fostering, in the words of NSC-68 (a central US Cold War planning paper), “a world environment in which the American system can survive and flourish [….,] a policy which we would probably pursue even if there were no Soviet threat.” Once the Cold War ended, the US did pursue this policy, although through the discursive framework of the war on drugs.

From cold war to drug war

According to a US Inter-agency Working Group Draft paper published at the fall of the Cold War, the counter-narcotics narrative had “the corollary benefits of helping democratic governments fight growing insurgent movements.”

Since the threat of international communism could no longer be invoked to justify foreign intervention, the war on drugs provided a means to continue counterinsurgency assistance in all but name.

Under the pretext of the war on drugs, US assistance to Colombia during the 1990s and 2000s was intensified, and consistently directed to Colombian army units both complicit in political violence and tied to paramilitary groups.

Meanwhile, the counter-narcotics narrative became starkly unconvincing given the evidence that paramilitary organisations – still functioning with the acquiescence of the Colombian state – were among the main players in Colombian cocaine trafficking.

The US was therefore funding the very organisations it was ostensibly trying to combat. This apparent contradiction is reconciled in light of the continuity of US objectives: retaining global economic hegemony by suppressing strategic and economic threats to US interests.

It is therefore not surprising that violence against social organisations in Colombia continues today. The collapse of international communism, as well as the FARC’s demobilisation, neither fully eradicated threats to US global preeminence nor the legacy of decades of counterinsurgency instruction.

As a result, the identities of social leaders, community organizers, and trade unionists in Colombia continue to be associated with “subversion” – an association that remains tantamount to a death sentence.

British military and police assistance to Colombia, beginning in 1989, was similarly framed within the context of the war on drugs. While failing to limit drug supply, this assistance sponsored political violence in Colombia by assisting units and individuals involved in counterinsurgency warfare.

British officials and commentators have hitherto presented this as an aberration of an otherwise well-intentioned policy. It seems more likely, however, that British involvement in Colombia was foremost bound to economic – and not counter-narcotics – considerations. Britain’s sponsorship of political violence in Colombia thus seems a deliberate strategic objective, and another chapter within a long history of British economic imperialism.

Students from Colombia visited the United Kingdom for military training during the early 1990s, and by 1995, the government revealed that over £13 million of drug-related assistance had been provided to Colombia.

When the New Labour party came to power in 1997, the promise of a foreign policy “with an ethical dimension” received wide support.

Behind the rhetoric, Former Prime Minister Tony Blair’s government intensified British support for the Colombian armed forces, which continued to compile one of the Western hemisphere’s worst records on human rights.

In 1998, for instance, the UN described violations of human rights and breaches of international humanitarian law in Colombia as “serious, gross, and systematic.” Colombia was later described by the UN as “the biggest humanitarian catastrophe in the Western hemisphere.”

British officials nonetheless insisted that violence in Colombia was not structural, and that the human rights situation was improving. As such, there could be fewer ethical (and legal) qualms with intensifying British intervention.

Arms exports increased, while senior British governmental officials and high-end military officers visited Colombia. By 2003, Britain was Colombia’s second-largest donor of military and police assistance – after the US.

The same year, a secret governmental report conceded that “over the past 10-15 years, despite interventions at every point in the supply chain, cocaine and heroin consumption [in Britain] has been rising, prices falling, and drugs have continued to reach users.”

After 14 years of ostensible counter-narcotics assistance to Colombia, no discernible progress had been made.

Meanwhile, Britain’s lack of transparency regarding its Colombian operations prompted concerns from human rights organisations. Details about bilateral British counter-narcotics assistance to Colombia were kept secret on the grounds of “national security.”

This assistance, moreover, was not tied to any conditions regarding human rights – meaning no credible assurances could be made regarding the Colombian military’s use of British assistance.

According to recent evidence, British military and police assistance actively sponsored individuals and units complicit in political violence in Colombia.

British military and police assistance thus both tacitly and actively supported counterinsurgency warfare in Colombia, thereby sponsoring the wide-scale attack on Colombia’s social organisations. And, as British commercial interests in Colombia increased, so too did an apparent need to pursue a failing and destructive war against drugs.

In 1992, after some years of oil exploration in Colombia’s Eastern Andes, British Petroleum made a historic discovery in the Colombian department of Casanare. The find proved the decade’s largest oil discovery in Latin America, and the company’s largest for 25 years.

Blair and John Browne (BP’s CEO, 1995-2007) shared a close relationship, and BP staff frequently exchanged roles with government officials. One MP later claimed: ‘there is a bit of a revolving door [between the British government and BP], the connections are probably more extensive than with any other UK company.’

The targeting of social organisations might appear a strange outcome of counter-narcotics assistance, before considering the economic roots of counterinsurgency warfare and its perpetuation through the “war on drugs.”

The sponsorship of political warfare in Colombia thus appears a policy goal tied to British capital interests. Britain’s war on drugs in Colombia might thus be better described as a war on Colombia’s social organizations.

British Petroleum’s private security strategy in Colombia also received wide condemnation for its use of counterinsurgency techniques. In line with an internal security review that claimed “in order to have peace, we must train for war” in Colombia, BP made significant payments to the Colombian military in exchange for the protection of its oil infrastructure.

The company also provided, in the words of a former Colombian colonel, “very valuable information” on perceived subversives in Casanare.

In 1992, BP contracted a private British security firm, Defence Systems Limited (DSL), to securitize its oilfields. DSL’s staff in Colombia included former SAS personnel that had trained the Colombian military in counterinsurgency during the 1980s and 1990s. Wide evidence suggests that this instruction continued.

The dangers of opposing BP

BP’s opponents became targeted with extreme violence, and many were murdered. In 2002, Casanare trade unionist Gilberto Torres was kidnapped by paramilitaries after holding work stoppages against BP.

His kidnappers later testified that the oil companies “asked us to execute this man. […] This man held too many shutdowns, too many unions, too many strikes.” Their testimonies were consistent with a European Parliament motion which condemned BP for ‘funding death squads in Colombia’ in 1995.

Both the British state and BP’s sponsorship of counterinsurgency warfare in Colombia is instructive of a symmetry of goals: the destruction of barriers to British capital accumulation.

The Colombian state’s peace agreement with the FARC is a historic achievement. A durable peace, however, requires social organizations’ ability to function without the threat of violence and extermination. For this reason, a discussion about foreign intervention, capital, and counterinsurgency warfare in Colombia remains essential.

While the roots of conflict in Casanare – as well as in Colombia – are undeniably complex, they cannot be disentangled from political violence fueled by foreign economic interests. British military and police assistance to Colombia sits well within this trend.

As BP’s capital interests in Colombia grew, Britain more zealously sponsored a state eager to cooperate in the destruction of barriers to private capital accumulation. Ultimately, Britain’s “war on drugs” in Colombia appears an exercise in neo-imperialism – the consequences of which continue today.

This article is a summary “The Trade Goes, and the Flag Follows? British State Intervention and Natural Resource Extraction in Colombia, 1989-2010’” published in The International History Review.

Author Kevin John McEvoy is a former student of Latin American history at the University of Liverpool, and a
contributor to UK journal The Canary.