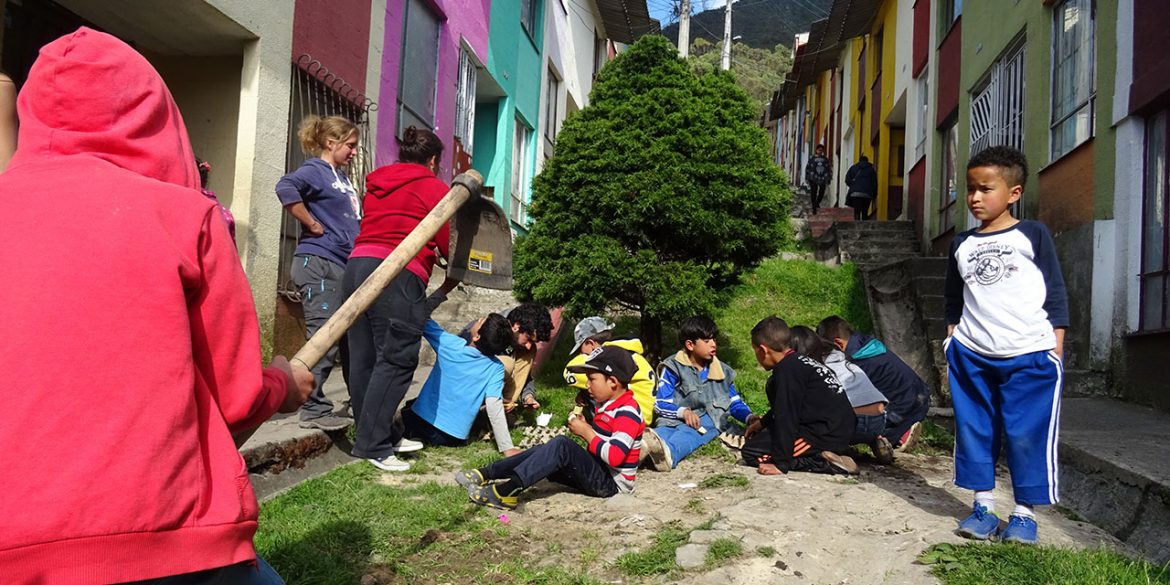 While Colombia’s government is reluctant to invest in the country’s peace process, communities in the capital Bogota are enthusiastically building peace themselves.

From high up on the edge of the mountain of the Santa Rosa and Moralba neighborhoods, Bogota stretches out below, high rise towers and financial offices a familiar sight to any capital city.

The average neighborhood street here is in stark contrast to this green, leafy backdrop however. Rubbish scatters slowly in the wind, dog feces litter the corners and many houses are recently occupied by displaced communities, giving rise to what many see as “gang culture.”

Yet between the rows of terraced houses, in a small patch of grass, a group of children are eagerly digging away in their community garden, hunting for the worms buried below whilst street dogs roam lazily around the block.

Sowing the seeds of trust 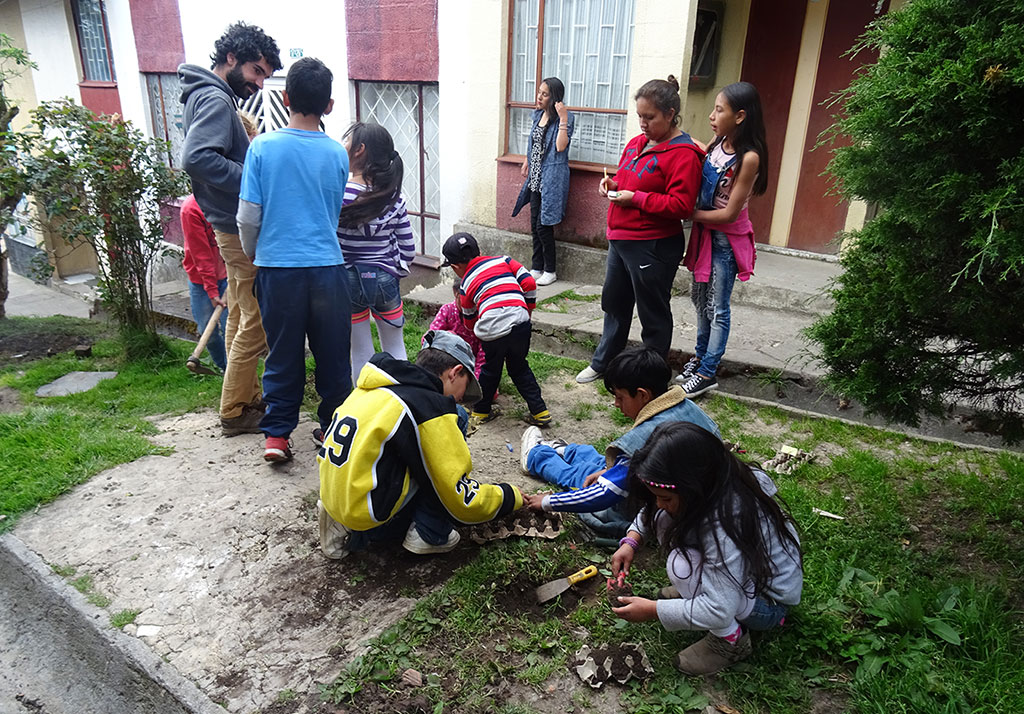 In these environmental education classes there are games to identify vegetables grown in different climates, quizzes to discover how long household items take to decompose, and ‘deforestation experiments’ with recycled bottles.

It’s a world away from conventional schooling programs, with elements of Brazilian philosopher Paolo Freire’s critical theory, looking at social boundaries and solutions for change, while keeping a fun spirit and attempting conflict resolution in tandem with the ‘education for peace’ classes.

Environmental education breaks with our very traditional paradigms of education, so it’s sometimes difficult to carry it out in the Colombian context. For education to be a tool in the peace process, it needs to develop children’s analytical and critical capacities about themselves, their daily environment and their country, to understand themselves as actors of change.

The foundation responsible for these classes, Project Without Borders (Proyecto Sin Fronteras), for years has been working in the neighborhoods that lie a historically neglected area with the highest percentage of displaced communities living in Bogota, the result of years of internal armed conflict in Colombia.

A majority of the victims who were forced to migrate from countryside areas such as Valle de Cauca have ended up in the peripheries of major cities, in neighborhoods such as Santa Rosa and Moralba, where former combatants of illegal armed groups (both far-right and far-left) coexist with civilian survivors of the conflict.

Many displaced communities within the neighborhood identify along regional and racial lines, in a way that many see as a form of gang culture.

I believe gangs have a strong power and influence here in Colombia. If you grow up in a difficult area, where you see that your opportunities are limited, where education is low quality, and on the other side you see these kids who have luxuries, who offer you these luxuries, well obviously you’ll see that as an option where you have few others.

In some instances, the children might state how they’re unwilling to play with children from the other side of the neighborhood, or because they are part of a different ethnic group.

“Unfortunately, plenty of racism still exists in Colombia, often around here the white areas don’t tolerate black communities and vice-versa. Between the neighborhoods many of us parents are friends, and we’re trying to collaborate, but sometimes the children say they don’t want to work with groups from neighboring areas,” according to volunteer Sandra Celis.

These divides can cause that what might otherwise be a normal childhood dispute in the playground could end up as a gang dispute between the two sides of the neighborhood.

A microcosm of Colombia’s armed conflict 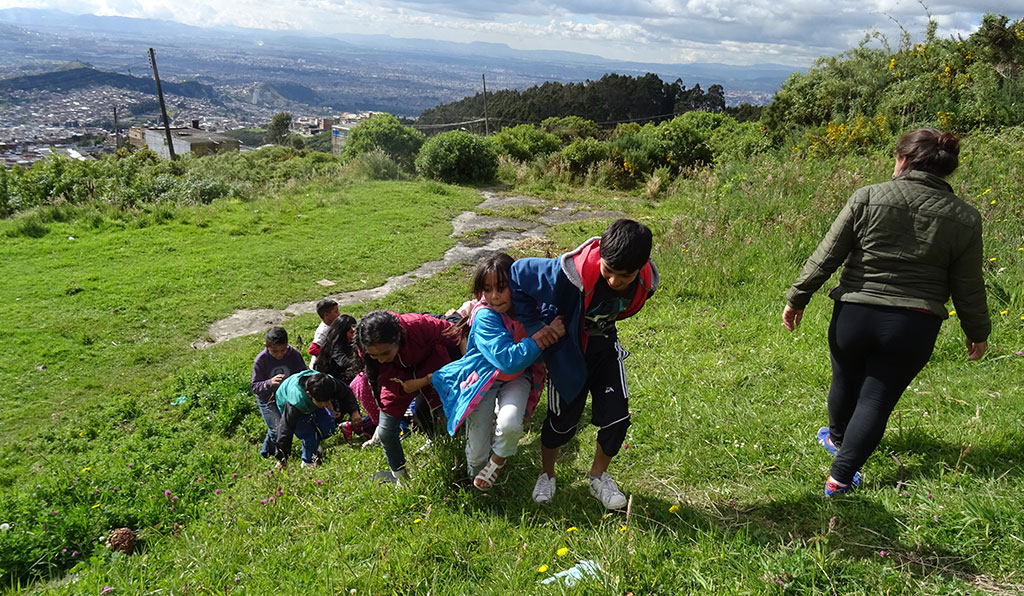 In many ways the neighborhood represents a microcosm of the shaky peace that exists in Colombia today.

Ahead of his June election, President Ivan Duque won on a platform promising to reverse numerous terms of the peace agreements, that many Colombians view as rushed or unjust, seeing the accords as giving overly generous concessions to military rebels who had been the perpetrators of violent attacks for decades.

Colombia signed official peace accords in 2016, but come 2018 it seems many are unhappy with the price, as the process hangs on a fragile thread.

“Right now in Colombia everyone talks about ‘reconciliation’. Since the peace accords in 2016, we have to reconcile in a country that’s been at war since it’s foundation. But I believe that we can’t reconcile ourselves as human beings until we reconcile with nature, and the connections we once had with nature,” Cardenas told Colombia Reports.

Yet, since the historic peace accords ending 50 years of civil war with FARC guerrillas, government studies have shown that “deforestation increased by 44% in the year of the peace accords”.

Huge swathes of land are now opened up to a range of international competitors, where large area of the country previously controlled by FARC rebels over were protected from the influence of international logging or mining.

This has also caused renewed land disputes to worsen, whereby certain regions of Colombia have experienced a dramatic increase in the killing of ‘social leaders’ and environmental activists protecting their communities from the advancement of land grabs and environmental destruction.

Either through such forced displacement from the countryside, or via economic migration, this growing urbanization represents a disconnection with the strong agricultural tradition in Colombia, the second most bio-diverse country in the world behind only Brazil of much greater size.

Communities pick up where the government fails 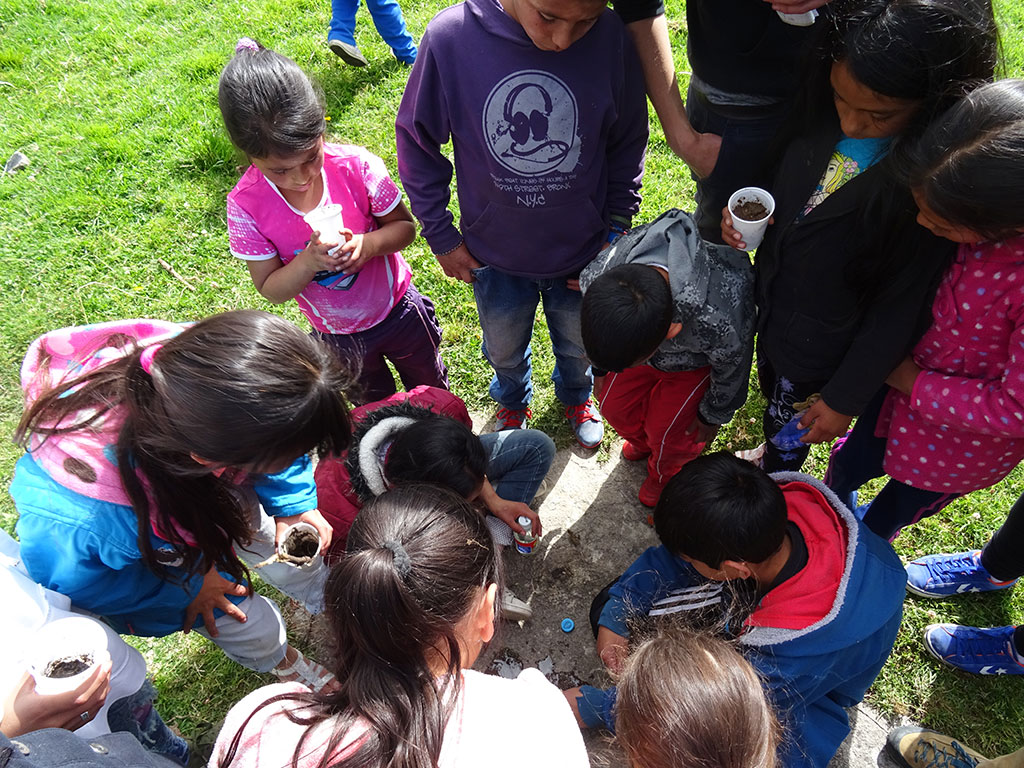 Infrastructure in Bogota is often found lacking as residents live with the daily realities of corruption and under-investment, as 8 million pack into buses in a city lacking a metro system, where water will frequently cut out in certain neighborhoods and rubbish go uncollected.

And yet despite such broader social issues, life goes on as normal in the average Colombian neighborhood as parents chat in the playground, neighbors help each other lending tools for the house and garden, whilst children happily play football and hopscotch around the rubbish and daily happenings of “gang culture.”

It’s a daily life similar to almost any major urban metropolis, in a century where global population is predicted to grow by up to 3 billion in the next 33 years, cities to reach up to 100 million inhabitants, and 80-90% of the earth’s total population expected to live in cities by the end of the century according to the latest UN figures.

Within this highly urbanized context, Proyecto Sin Fronteras’ education program in the neighborhood works over three terms to teach firstly about diversity in Colombia, secondly some of the global environmental threats and thirdly looking towards community solutions and problem solving.

There are serious topics such as global warming and deforestation on the curriculum, but this precious urban garden space also offers the group moments of childhood play within nature, alongside practical opportunities to grow and discover gardening techniques they may not otherwise have access to.

One of the major aims of Sembrando Confianza of is to create ‘edible neighborhoods’ in a city where the idea of ‘urban gardens’ is little supported by the local authorities. This is despite a growing wave of international practice and research showing psychological benefits out outdoor education, or the ‘garden therapy’ movement that aims to improve mental health and community engagement through gardening projects.

Another element of the organization is creating networks and marketing channels for independent organic farmers supplying the city of Bogota, a city reliant on large scale production from the rest of the country for it’s growing urbanization and food supply needs.

This centralization in the city only serves to feed the major agro-industrial businesses that are displacing people from the countryside in the first place, as rural community defenders describe “receiving ongoing threats from individuals they accuse of working for local and national industrial agricultural business owners.”

The work of Proyecto Sin Fronteras and other similar organizations is attempting to break numerous cycles and behaviours so deeply entrenched in every level of Colombian society, “you have this awful mafia culture throughout Colombia, that says “I want to get things with the minimum effort and have a lot of money.”

“It’s reproducing the patterns of a corrupt political class, but it’s in every level of society too,” said Cardenas.

This small but growing Colombian urban garden movement is attempting major social and environmental changes in the context of a country where the barriers are numerous and the weight of recent history plays out in countless community tensions, yet Colombia a country with an incredibly rich diversity of nature, people and culture with strong environmental traditions to which many are reconnecting in this new, urbanized world.