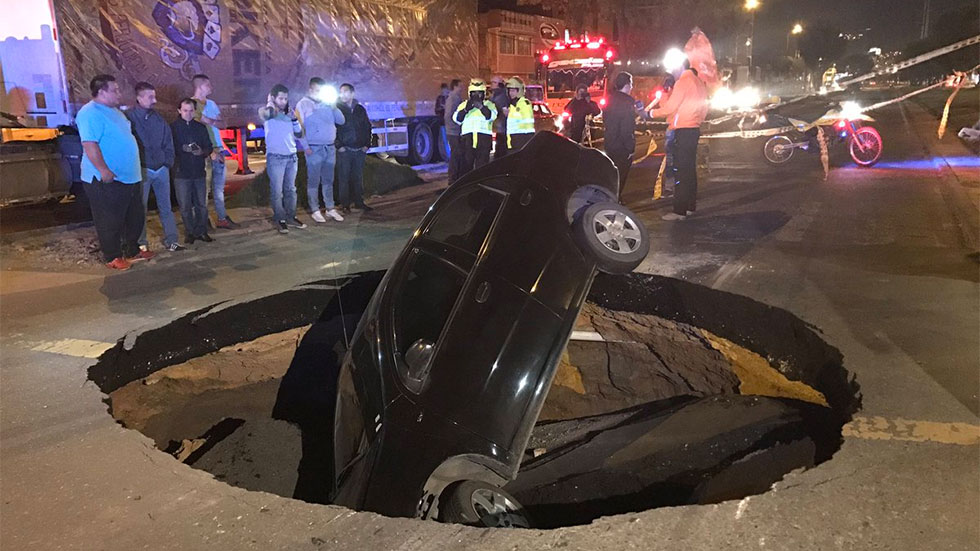 A giant pothole in Colombia’s capital Bogota swallowed a whole car in the early hours of Tuesday morning, a local reported on Twitter.

According to newspaper El Espectador, the driver luckily escaped without injury as his car was devoured by the crater estimated to be four meters wide and two meters deep.

The incident took place on Avenida Boyaca and Calle 40 sur in the La Sevillana sector of the city.

“I was moving at a normal speed of around 60 kilometers per hour, but when I passed the street – about 2:00 in the morning – when the hole made me brake,“ David Guevara to Noticias Caracol.

Anticipating an incident like this, the locals had put warning signs up for drivers.

The inhabitants of the street claimed that the hollow in the road was caused by a leakage of groundwater resulting from works carried out by a company contracted by the Aqueduct and Sewerage Company of Bogota.

“Our water was cut off on Saturday afternoon …….. those of the Aqueduct were looking for water failure and they did not find it … I think the water was lying there and that’s why the hole was created, “said Ferney Mendez, a neighbor of the area to Caracol News.