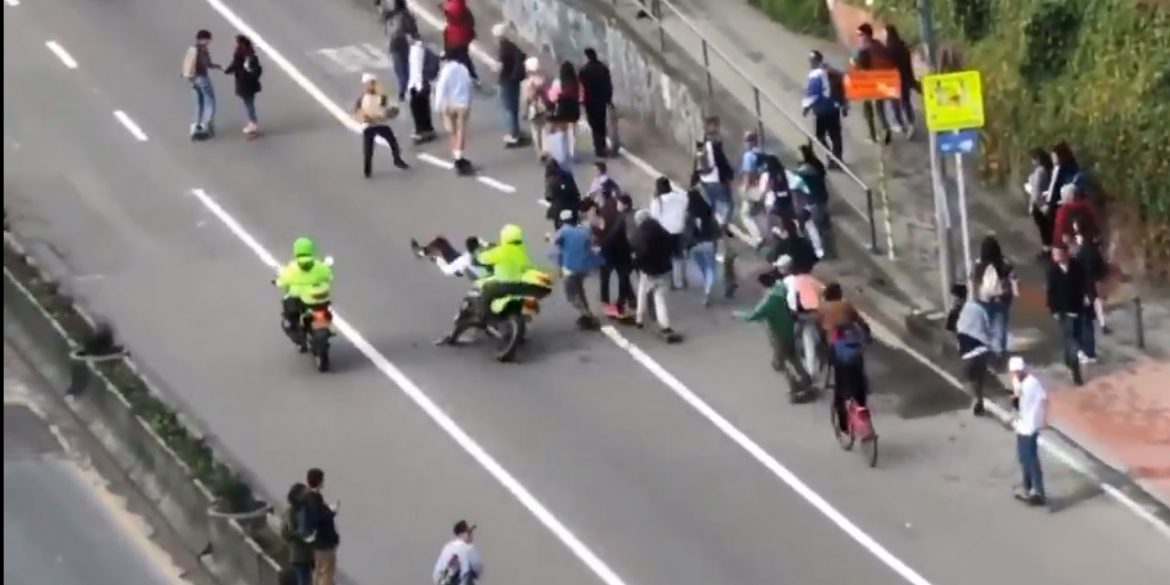 Bogota police under fire over violence during Go Skateboarding Day

Police in Colombia’s capital Bogota came under fire on Friday after a motorized policemen crashed into a skateboarder during the local celebration the global Go Skateboarding Day.

The violent incident occurred on the city’s main 7th Avenue where a large number of skaters took part in the event.

Video that was published on social media showed how one of the policemen recklessly rode through the crowd at high speed and hit one skater in his way, causing both to fall.

Nearby skaters immediately assaulted the cop after which his colleague, who had been riding at a safer distance from the manifestation, turned around and purposely rode over one of the men assaulting his colleague.

In a second video, which appeared to show a separate incident during the same manifestation, a policeman is seen brutally headbutting a woman while wearing a helmet.

In an initial response, the Bogota police department claimed that “due to the disorder caused by a group of demonstrators causing collapse and blockade of this important road, it was necessary the legitimate use of force to restore normal mobility and public order in this sector.”

The Bogota police department claimed that five cops had been injured in this incident after being hit by “blunt objects” and that three people had been arrested.

In relation to the first incident, the police department said that it “regrets this situation and will initiate the necessary investigations to determine the responsibility of the officers that took part in this action.”

Bogota Police commander General Hoover Penilla said Saturday that he would ask for the suspension of all three policemen who were filmed committing acts of violence during the skaters’ celebration.

I am requesting, within my powers, that these two police officers who assaulted and ran over several citizens, the one who assaulted a woman and others who used their batons in an unauthorized manner, be provisionally suspended and dismissed from their positions.

The police in Colombia’s capital is notorious for its abuse of power and the use of excessive force in the case of disturbances.

The department was embarrassed earlier this year after it fined a student for buying a snack from a street vendor, claiming that the man was “promoting illegal activity.” The department was ultimately forced to refund the fine after the police inspector found the involved cops had misinterpreted the law and overstepped their authority.

The coming into force of a new police code in 2017 has led to an increase of incidents that would be contrary to promoting peaceful coexistence in the city, according to NGO Fundacion Ideas Para la Paz.

The constitutional court earlier this year scrapped a number of articles from the police code in relation to the consumption and possession of legally allowed doses of drugs and alcohol in public that has widely been perceived as an invitation to arbitrarily harass and even extort citizens.