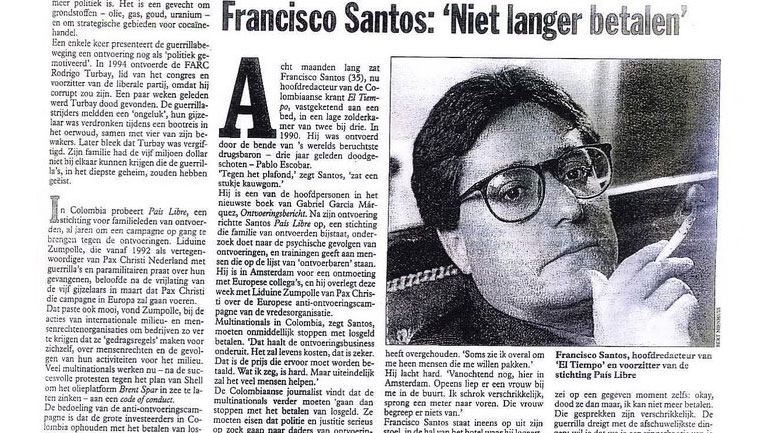 A Bogota mayoral candidate who once declared to be a marijuana aficionado now wants to ban the drug in Colombia’s capital.

Francisco Santos, the cousin of President Juan Manuel Santos and candidate for the Democratic Center Party, said Sunday that the first thing he wants to do if elected mayor of Bogota is promote a referendum that seeks the full penalization of marijuana smoking.

In an interview with El Tiempo, a newspaper owned by his family until 2007, Santos said that “drugs are killing this city.”

The candidate, the former editor-in-chief of the newspaper, however, was reported buying marijuana during an interview in The Netherlands in 1997.

In fact, according to Dutch weekly Vrij Nederland (Free Netherlands), he rolled a joint during the interview. The photo that accompanied the interview shows Santos smoking.

In the interview he said he celebrated his release from captivity after being kidnapped by slain drug lord Pablo Escobar “with a lot of doobies.”

“In a coffeeshop Francisco Santos and his wife Maria Victoria, who accompanied him to Amsterdam, buy Dutch-grown marihuana (“I never thought you grow it yourselves too”). They roll a joint. This is how they celebrated the release of Santos years ago: With a few friends and a lot of doobies.”

Scientists have affirmed that marijuana consumption does not lead to long-term memory loss, but times have changed for the admitted pot smoker; he is now trying to run for mayor on a conservative ticket for a party that seeks a hard-line on drug use.

“I will organize a consult or a referendum to ask them if they want to ban the drug doses for personal use. And I will do a campaign so that the people say yes,” said Santos.

Congress is currently scheduling debates that seek the legalization of marijuana for medicinal use. One leading senator of the president’s U Party, Roy Barreras, has said he wants to amplify this proposal and seek the full legalization of the drug.

However, the Democratic Center party is fiercely opposed.

Party leader Alvaro Uribe made numerous attempts to criminalize the carrying of small amounts of marijuana when he was president between 2002 and 2010.

One attempt was successful and Uribe succeeded in pushing a bill criminalizing the smoking or carrying of marijuana.

However, as soon as his successor took office this law was revoked and Congress began looking for less repressive ways to deal with drug consumption.