Gustavo Petro sworn in as Colombia’s new president
The men and women who will govern Colombia...
Colombia to seek decriminalization of drugs despite US...
Colombia’s failing state | Part 6: indigenous under...
How serious is Colombia’s president-elect about fighting corruption?
How violent Colombia became while Duque was in...
Medellin’s secret history of violence against women and...
How hostility to the press ended up isolating...
Rebuilding Colombia Reports after 4 years of devastating...
Colombia and Venezuela to mend ruptured ties
News

Medellin’s homeless population tends to be very hidden unless you are downtown, walking along the Medellin river, or in one of the city’s two homeless attention centers.

Maria Pilar Messino is the coordinator and a social worker at Centro Dia 1. Centro Dia 1 is one of two basic homeless attention centers in Medellin where the city’s homeless population can go shower, eat, sleep, receive medical and psychiatric attention, and attend workshops.

Medellin and Bogota are the only cities in Colombia that provide public centers and programs for their homeless populations. Centro Dia 1 and Centro Dia 2 are run by the Secretary of Social Inclusion under Medellin’s mayor’s office.

“The homeless look for these centers because they are helped here, not just by the mayor office’s policy but also from the love we put into our work. On the street, many people discriminate against the homeless and fear them, but they are very affectionate. They are all about hugs and just want to give you kisses,” Messino explained. 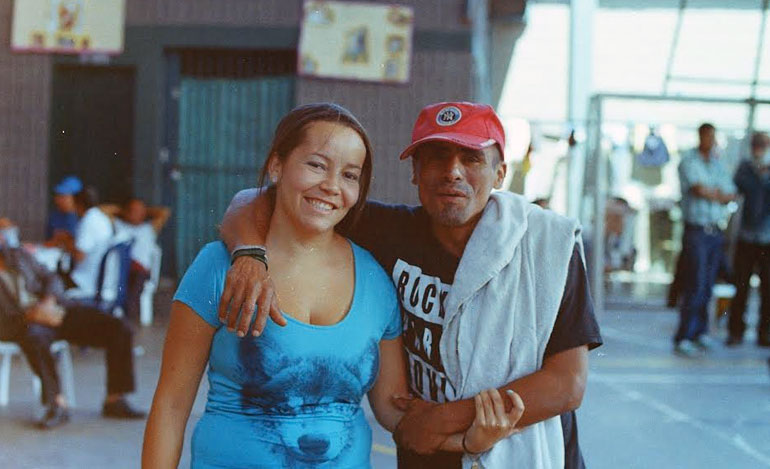 Centro Dia 1 looks much like a castle from the outside and the inside. It is located on a corner on the limits of downtown Medellin. The center has high walls and a metal gate that opens six times a day.

Messino has her office on the ground floor with direct access to the courtyard. Her office is flanked by the office of the contracted doctor that is assigned to each center and the office of the social worker that does the preliminary interview of every new homeless attendant.

Centro Dia 1 provides its services to people from 18 years old to 59 years old. Homeless under 18 and over 59 get referred to other agencies responsible for youth and elderly.

Homeless people can enter the center first at 6:30am. At that time they have access to the bathroom and the showers and are given a token to receive sugar water and bread. After that they attend a group meeting, which is the first interaction of the community, everyone is given breakfast. After breakfast, different groups are then held during the day on various topics.

When Colombia Reports visited the center, there was a lecture in the courtyard pavilion on sexually transmitted diseases.

Doors open again at 11:00am which is when people who have been attended can leave. However, Messino hopes that the homeless stay at Centro Dia 1.

“Here at Centro Dia 1, we are working hard so that people who enter the center don’t leave. We want to see progress with them and have things change in their lives when they come here. For example, we are putting great emphasis on personal presentation. People who arrive really really dirty, we loan them clothes. We don’t want to give them the clothes so they get in the habit of washing it and giving it back so we can loan it to someone else,” explained Messino.

More homeless can enter again at 1:00pm and leave again at 5:00pm. The last chance for a homeless person to enter Centro Dia 1 is at 5:30pm and at that point, all that decide to stay must sleep there until doors open again at 6:30am. Centro Dia 1 can accommodate 200 homeless overnight and 350 during the day.

Homeless people who leave the center at one of the designated times are not allowed back in the rest of the day to guarantee that they don’t leave to consume drugs and come back just for food.

People who go to the center can receive a psychological evaluation and get attention from a partnership the center has with Antioquia’s mental hospital. However, that gets complicated because mixing prescription medication with crack and alcohol doesn’t necessarily produce the best results.

In much of the world and Medellin especially, homeless is synonymous with crack addict. Crack or ‘bazuko’ abuse is the primary way officials at Centro Dia 1 identify a homeless person worthy of entering the center.

Indicative signs of homelessness and drug abuse that the center looks for are physical deterioration, loss of teeth, burnt fingers, underweight, bad smell, and really dirty and worn down clothes.

“We look to start a process with users that are trying to stop using drugs or substitute their primary drug which is usually crack. Pipe crack is the most destructive physically. It is very difficult for people who consume crack to get off it. We want to prevent that they get completely absorbed by the street because the simple packing of a pipe becomes a whole epic for them. We work to see if they can substitute crack for say, marijuana, because it isn’t as destructive for them, which for them is a huge win. Hopefully they get to a point where they won’t even consume marijuana,” explained Messino.

According to Messino, the homeless problem has been exacerbated and made a lot more visible when a presidential order told authorities to destroy all the crack houses, also called ‘cuevas,’ in Colombia. There, Medellin’s homeless would live in houses run my micro-traffickers of ‘bazuko’ and auto-destruct.

Messino was part of group that would go to ‘cuevas’ with doctors to take those on the verge of death to hospitals.

“There was a huge campaign to end the cuevas. Before that, homeless people were invisible because they were in the cuevas. Now they are very visible. Imagine a house with no windows, a door, 100 or 200 people consuming drugs. All the smoke, smell. You don’t know if the people are dead or alive. Pregnant women, very young people.”

Messino expressed the difficult nature of her job. Few of the subject she works with are able to get off drugs for a long time. “It is hard thinking one has been rehabilitated and see him come back in a few weeks in rough shape again. We have to work a lot the patience and tolerance. It is hard not to form personal bonds with them and become friends with them. And their realities hurt.”

Another problem that Messino pointed out is that the center may succeed in rehabilitating a drug addict, but after they are released, they do not have a support network and can easily slip back into drug abuse. Long term rehabilitation centers and housing cost to much money for the center to send people, and so after a certain point of support, the homeless drug-addicts are left alone without being able to sustain themselves.

“Of the 200 people I have in this center right now, if I am able to rehabilitate two, that is a huge success for me,” mentioned Messino.