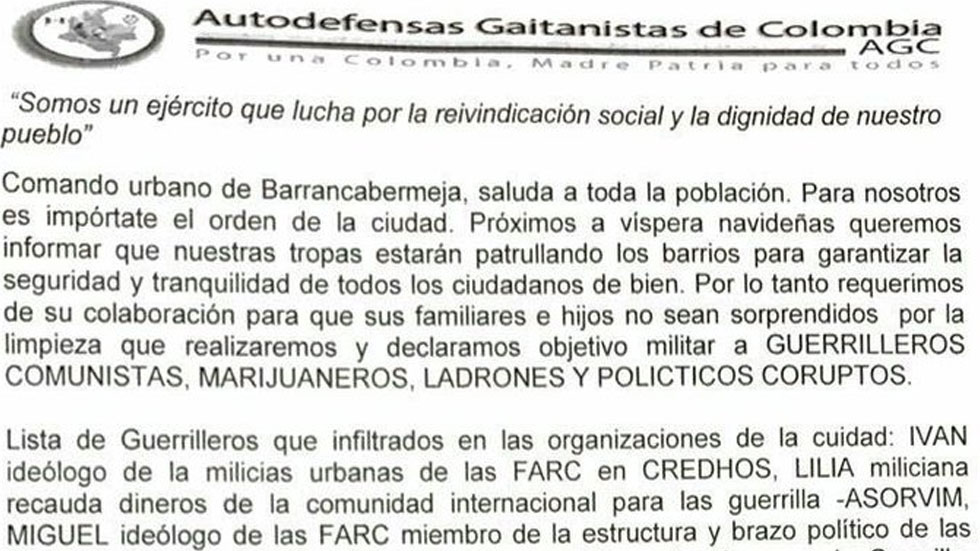 Colombia’s human rights and community leaders continue to be the target of assassination attempts and death threats in an apparent surge in paramilitary violence.

Another incident was the distribution of a pamphlet threatening seven members of the Patriotic March social movement, including its leader former Liberal Party senator Piedad Cordoba.

The pamphlet, signed by the urban command of the paramilitary successor group, the AGC, a.k.a. “Los Urabeños,” offers rewards for “[social] cleansing” and the “heads” of social leaders and supposed guerrilla collaborators in Barrancabermeja, an oil town on the border of the Santander and Antioquia provinces.

So far this year, 70 members of the Marcha Patriotica, a syndicate of smaller social movements, have been murdered, the organization told newspaper El Espectador.

This violence seemed to increase after the government and the FARC signed peace in September, eerily resembling the beginnings of a period of extreme violence that shook Colombia in the 1980s and 1990s when the FARC’s last attempt to enter politics led to the assassination of more than 3,000 members of the Patriotic Union party.

This violence spurred the further radicalization of the FARC and marked the beginning of the most violent episode in the group’s 52-year history.