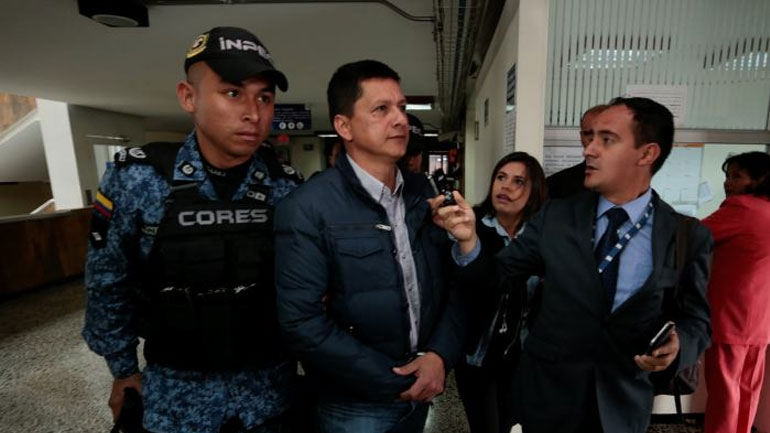 A former Colombian army colonel who is charged for the murders of 32 civilians said he wishes his trial to be transferred to a transitional justice court that will try alleged war crimes in the event of peace with FARC rebels.

Colonel Robinson Gonzalez has faced at least 14 criminal charges linked to the “false positives” scandal, in which between 2002 and 2009 members of the military were taking part in the extrajudicial killings of thousands of civilians dressing their victims as guerrillas in order to present them as combat kills.

This widespread killing cost the lives of thousands of innocent Colombians and happened after the government faced a decrease in guerrillas killed in combat and thus created the incentive of “the payment of rewards for the capture or killing of ringleaders of the illegal armed groups.”

Gonzalez’ lawyer Oscar Emilio Silvia told the judge that the retired Colonel is not ruling out the possibility of undergoing the process of Transitional Justice agreed on September 23.

As part of the agreement, FARC guerrillas, military personnel and politicians who admit to serious crimes including crimes against humanity will face between five and eight years of “restricted liberty” in certain conditions.

Gonzalez is currently facing the potential charge of 50 years, which could be halved if he continues to cooperate with the standard justice system.

According to the Prosecutor General’s Office, the guilty has remained forthright during the criminal proceeding.”I am going to continue collaborating with the Prosecutor General’s Office … Up until now neither myself or my family have received any threats,” said the retired Colonel, adding that he wishes to remain in La Picota prison in Bogota, which caters specifically for public officials.

Between 2006 and 2009 Gonzalez admitted to finding civilians with criminal records, taking advantage of their vulnerability and ordering their murder by fellow soldiers in order to increase his history of murdered FARC guerrillas.

“Each alleged guerrilla was given a backpack with lemons, bread, milk, brown sugar and propaganda accessories,’ said the accused of one case, adding that there were also guns, shotguns and grenades in the bag so that they appeared guilty.

Among a list of crimes, the high command military member was responsible for aggravated homicide, the possession of firearms and lying in public documents. For this he will face a minimum sentence of 50 years.

‘He knew the the situation that these people were in, their state of vulnerability and he gave the order to end their lives,” said the prosecutor.

The Prosecutor General’s office is currently conducting 15,951 trials related to the false positive scandal in which a massive 10,853 people are being investigated, most of whom are linked to the security forces, according to Caracol Radio. The size of this number is emphasized by the comparing point that there are currently suspected to be around 8,000 members of the FARC.

So far there have been 833 convictions, 787 of which have imprisoned members of the Army or the Navy including 59 sergeants, 34 second lieutenants, 51 lieutenants, 16 captains, 11 colonels and 10 majors.

On Tuesday, the Prosecutor General’s Office reported that there have been 3,659 extrajudicial murders, 80% of which were cases where civilians were falsely presented as guerrillas killed in combat.

In exchange for legal benefits, the prosecutor is allegedly continuing to ask for collaboration from military members in order to identify senior officials under investigation.