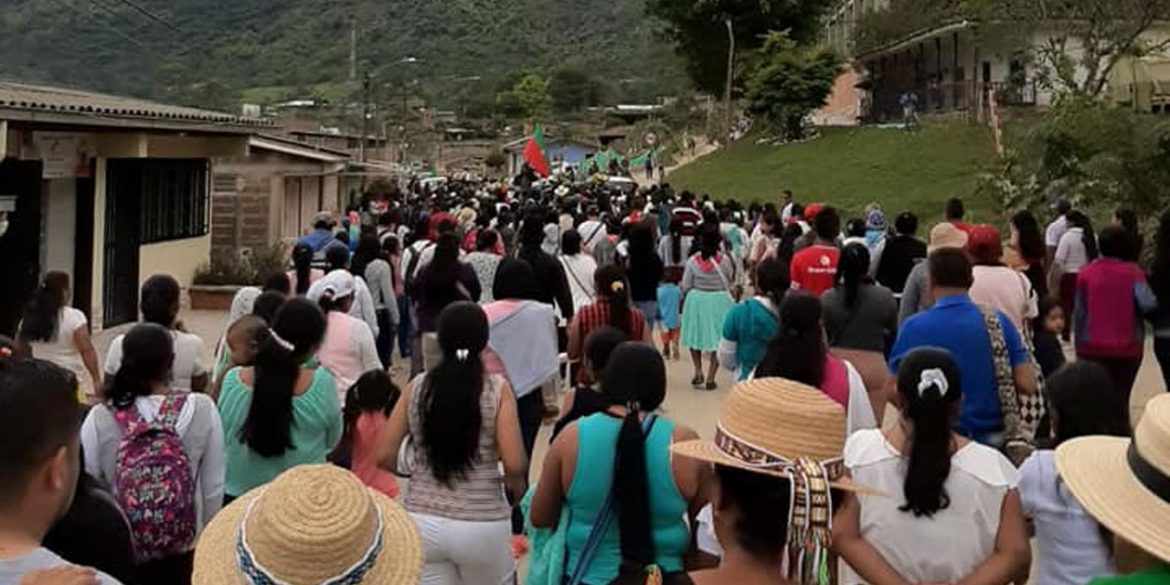 Native Colombians from Toribio taking part in the burial procession of one of their assassinated leaders. (Image: CRIC)
News

The escalation of violence comes a week after a group calling themselves the Sinaloa Cartel vowed to kill anyone associated with local indigenous authorities.

According to local indigenous communities, the two guards of an indigenous reserve in Caloto, Cauca, where assassinated early Saturday morning.

Members of the community trying to approach the site of the double homicide were subsequently taken under fire. At least one woman was injured in this attack, regional indigenous organizations ACIN and CRIC said.

Native Colombians from the region organized an immediate mass mobilization, but they too were taken under fire.

Following the attacks, the regional indigenous authorities called on national authorities and the international community for action while it was unclear if people were still being shot at or the violence had ended.

We inform the national and international community that indigenous communities and guards who are approaching the area where the attack on the caravan of guards took place, and the assassination of the two indigenous guards, are being received with long-range firearms,… there is an attack on the community going on from the upper part of Pedregal and other sectors in the rural area of Caloto Cauca.

Since the beginning of this month, one native Colombian elder and four indigenous guards have been assassinated in an apparent escalation of ethnic violence, presumably by drug traffickers.

The demobilization of the FARC guerrilla group in 2017 created a major power vacuum in northern Cauca, one of Colombia’s most troubled provinces.

The native Colombian peoples living in the region are caught in the middle of turf wars between groups trying to fill this vacuum as they try to protect their territories from invaders.

The northern Cauca region specifically has seen an increase, Lapaque said last week, implying that illegal armed groups have been accumulating territory for the large-scale production of cocaine.

The increase in assassinations of community leaders and human rights defenders during Colombia’s peace process has been most intense in Cauca, but is a national phenomenon.

Ahead of the most recent assassinations, think tank Indepaz said that at least 229 social leaders have been assassinated since President Ivan Duque took office a year ago. Sixty-six of the victims of these homicides were indigenous leaders.

Colombians took to the streets massively last month to reject these mass killings and demand Duque and his cabinet to take effective action to curb the violence.