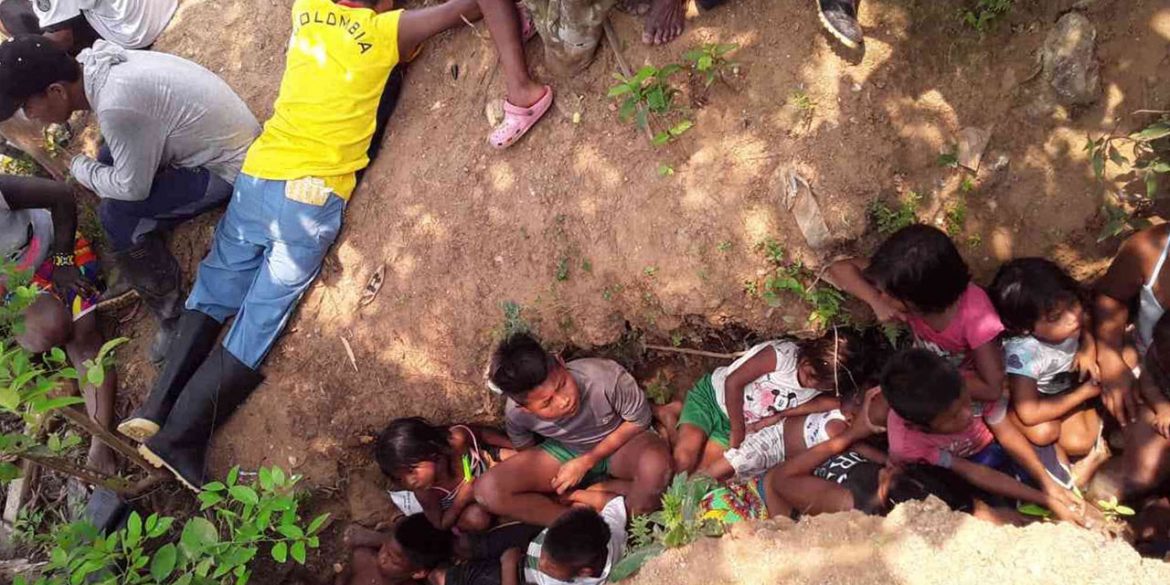 Embera children hiding in a ditch to avoid getting shot.
War and peace

Armed conflict reactivating throughout Colombia as peace process is crumbling

Deadly violence and forced displacement continue to increase in Colombia despite an ongoing peace process, according to international observers.

International human rights organizations have reported massive increases in massacres and displacements between 2017 and 2018, and new data on 2019 shows the trend continuing.

The country’s decades-long armed conflict is reemerging across the country, primarily in areas where the government has failed to exercise territorial control or implement the 2016 peace deal with demobilized rebel group FARC that is fiercely opposed by the far-right political party of President Ivan Duque.

According to the United Nations Office for the Coordination of Humanitarian Affairs, attacks on the civilian population have continued to increase in the first two months of 2019, especially in provinces most affected by the country’s armed conflict like Norte de Santander, Narino, Antioquia, Cauca and Cordoba where state presence is weak if existent.

In areas that are struggling with the implementation of the peace process, homicides have increased by 64%, civilian injuries due to conflict 75%.

Reports of torture have increased by 250%, and sexual violence has increased 200%, both of which are typically under-reported.

The UN reported that massacres increased by 164% in 2018, from 11 to 29 cases. According to national police statistics, 49.5% of municipalities reported an increase in homicides.

The civilian population, as has always happened, is the most affected in the reactivation of the war

According to the United Nations, in the first two months of 2019, more than 2000 people were displaced in nine mass expulsions either by illegal armed groups or combat.

At the end of March, the biggest mass displacement in Colombia since 2011 was registered in southwestern Cordoba where paramilitary group AGC and rearmed FARC guerrillas and fighting over control of the “Nudo de Paramillo,” an important drug trafficking corridor.

On March 21, armed men arrived in Santa Rosa, a village in the Municipality of Puerto Libertador and demanded residents leave the village.  They immediately complied and took shelter in improvised camps nearby.

The regional peasant association reported Thursday that 700 families have been displaced.

According to Arnobis Zapata, leader of the Cordoba farmers association, there are now 1700 people displaced between Juan Jose and Tierras Altas. The displacements are a result of fighting between the AGC paramilitary group, the dissident new 18th front of the FARC and the military.

This zone has been left completely abandoned without military presence… Had they responded to our initial demands [for security] this could have been prevented.

According to OCHA, another 700 people were displaced in Narino last week because of fighting between armed groups near Tumaco, Nariño.  The displaced persons were primarily from Afro Colombian and Indigenous descent.

The data for 2019 suggests that the trend of increased displacement is continuing, with at least 12 mass displacement events leaving almost 4,400 registered victims.

Following the 2018 trend, alarms the persistence of this victimizing fact, especially in Afro-Colombian communities (49%) and communities (47%) from Nariño and Norte de Santander, respectively. It is worth noting that, 38% of people in a situation of are children, and 31% are women the most vulnerable population groups. The confrontations between different armed groups (61%) and fighting (33%), the latter with the exception of the Armed Forces, are the main cause of these events.

Displacements occurred primarily in areas that were under FARC control and other armed groups have taken advantage of the power vacuum after the security forces failed to assume territorial control.