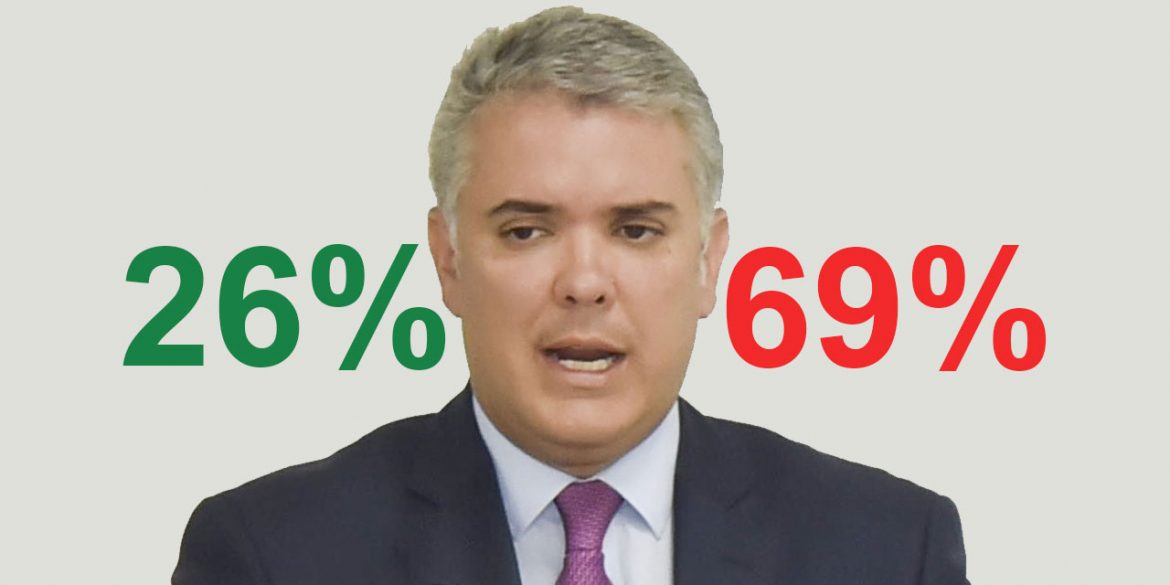 The latest slump followed a disastrous month for the president, whose party received a beating in local elections last month and whose defense minister resigned on Wednesday over a military operation that killed at least eight children.

According to Gallup, Duque’s disapproval rating soared to a record 69% two weeks before a national strike in opposition to the president and his policies.

The president’s previous disapproval record was set in November  after Finance Minister Alberto Carrasquilla presented a tax reform that included corporate tax cuts and the lowering of the income tax threshold.

The poll was held before Tuesday, when a scandal broke over the apparent cover-up of the killing of eight children in an August 29 bombing that Duque praised at the time as an “impeccable operation”.

Why Colombia rejects its president

Duque’s approval rating has never been above 50% and has suffered because of  his perceived failures in regards to unemployment and public security.

While Colombians’ general pessimism dropped slightly, concerns about the economy that skyrocketed in November together with Duque’s disapproval rating, are increasingly causing pessimism.

According to Gallup, 77% of Colombians said that the country’s economic situation is worsening.

Colombians’ pessimism is breaking all-time records in regards to unemployment; according to a staggering 88% of polled Colombians the labor situation is getting worse.

This is confirmed by unemployment rates that have been slowly increasing since 2015 when they hit an all-time low, but this increase has accelerated since Duque took office in August last year.

In regards to public security, 85% said that things are getting worse.

Duque has insisted that both the economy and public security are improving,  but Colombians appear to trust the statistics claiming the opposite more than their president.

Guerrillas are back on the public agenda

Another concern that grew considerably since August are guerrillas, while pessimism about the peace process with the demobilized FARC guerrilla group reached a record 70%.

For the first time since Duque said he refused to talk to the country’s last-standing guerrilla group, the ELN, the president has lost majority support over this decision.

In general, 62% of Colombians continue to believe that the country’s problem with guerrillas and other illegal armed groups is resolved through negotiations, not by the militaristic policies preferred by the president and his far-right Democratic Center party.