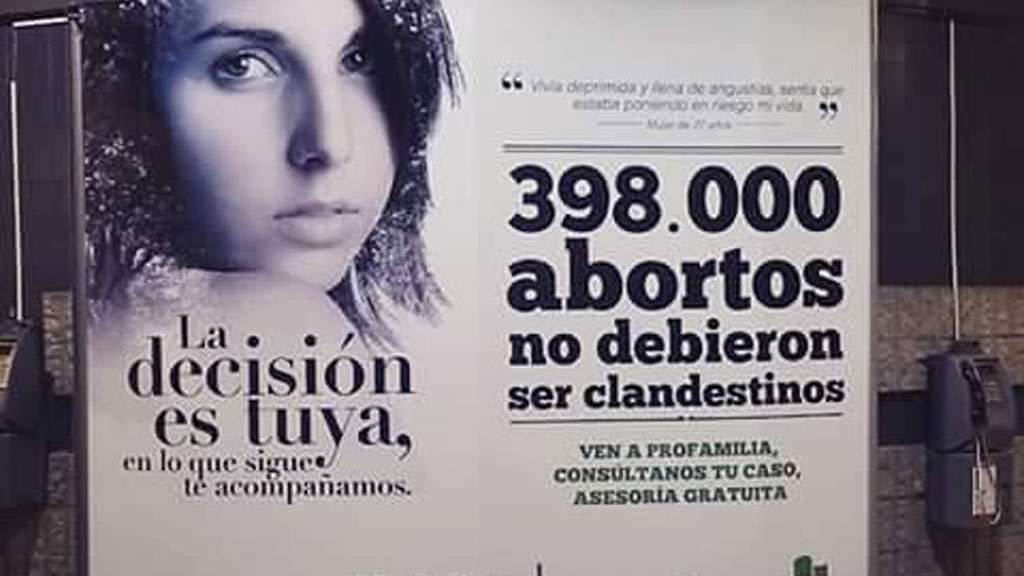 An abortion awareness campaign by a local sexual health association on generated controversy in Medellin this week after pro-life activists have claimed the campaign is promoting abortion.

Posters saying “The Choise is Yours” were put up inside metro stations and trains by ProFamilia, a private entity that promotes sexual health, and provides family planning services to Colombian women.

However, according to anti-abortion/pro-life activists, the poster is misleading and rather than informing women on their rights, the campaign promotes abortion as an option for unwanted pregnancies.

The pro-life organization demanded the Medellin Metro organization remove the posters, but was told the campaign is “legitimate” by the metro’s operational manager Claudia Restrepo.

Abortion is only legal in Colombia in cases the pregnancy is the result of rape, threatens the life of mother, or if the fetus has little chance to survive birth. In all other cases, abortion is illegal and considered homicide by law.

According to ProFamilia Health director Juan Gonzalo Lopez, “the messages are respectful and their objective is to defend the rights of women,” stressing his organization only targets women in legal abortion cases.

The posters stress that “398,000 abortions should not be clandestine,” implicitly referring to the alleged annual number of women and girls who undergo clandestine, and sometimes highly dangerous abortions.

According to United for Life, this number is false and moreover refers to all cases of abortion, not just the ones that are legal.

Abortion was illegal under any circumstance in Colombia until 2006 when the Constitutional Court ruled that the practice was illegal, except in aforementioned exceptions.

However, in a country where 95% of the population is Catholic, this ruling stirred major controversy.

Church officials threatened to ex-communicate the medical team performing Colombia’s first abortion: that of an 11 year old girl who got pregnant after being raped by her stepfather. Also in cases that abortion is legal, doctors have refused to carry our the operation due to their ethical objections.

A 2011 Guttmacher Institiute report found that only one in every thousand abortions performed in Colombia were carried out legally and that 13% of women undergoing clandestine abortion die in the process.

What Colombia Can Teach the US About Abortion (Huffington Post)