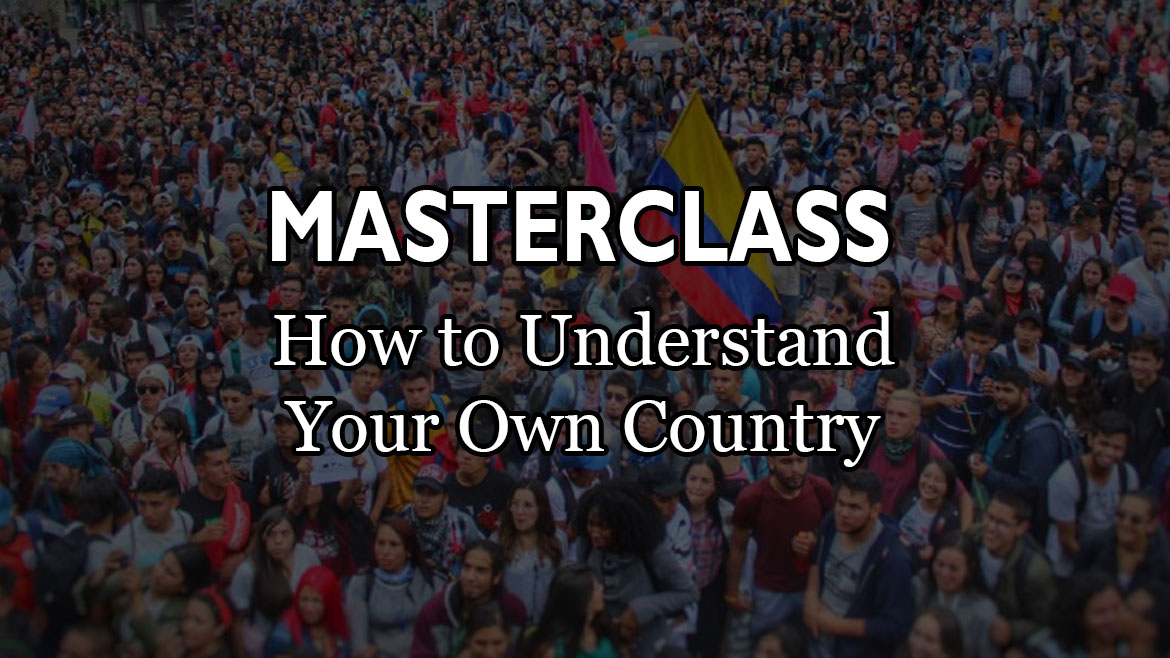 A country guide for Colombia’s pseudo-nobiltiy

Colombia Reports offers masterclasses, “How to Understand Your Own Country,” to Colombia’s pseudo nobility for one minimum wage per hour.

The first masterclass is free because I have learned that Colombia’s elite doesn’t like paying for stuff, or they would be paying taxes like the rest of us.

I am confident that me sharing my knowledge about your country and its people will demonstrate that one minimum wage per hour is not just a bargain.

This masterclass provides you with a unique opportunity to catch up on hundreds of years of ignorance and hide multiple personality disorders.

Lesson 1: What is empathy?

Empathy is a social skill that allows a person to understand and share the feelings of other people.

This skill is not just super useful in personal relationships when you’re struggling with questions like: “Why is my girlfriend crying,” but also helps to answer questions about your country like: “Why are people burning a statue of Simon Bolivar?”

Empathy doesn’t come naturally. Most children learn this skill when they are approximately four years old by interacting with other children.

Not every child is the same and — especially if you have been separated from other children — it’s possible you never learned to be empathic.

Psychologists call this Empathy Deficit Disorder, or EDD. The hoi polloi may call it “being an asshole,” but what do they know, right?

If you have difficulty being empathic because you also suffer a narcissistic personality disorder, you can always try to pretend.

For example, when you think: “Stop whining, you fucking peasant,” you can lie and say: “I know how you feel.”

If your job doesn’t require you to leave your safe space, there’s no need to fake empathy. If you want a career in politics, however, faking empathy can save you millions of dollars in buying votes.

Lesson 2: what is private property?

Private property is property a person claims to be his, a claim that is commonly confirmed by a legal document or something as simple as a receipt.

If other people dispute your claim to property, killing them will allow you to keep their property, but is risky.

The problem with other people is called “human rights.” These universal laws transcend property rights, also if you successfully bribed your corrupt friend to transfer the property rights.

These universal laws allow a judge to force you to return your private property to your victim’s family and even send you to prison.

Technically, you could kill every last family member of your victim, but the chances of getting away with this are virtually nil.

Lesson 3: What is a Colombian?

A Colombian is a human being who was either born in the country, has parents from Colombia or has received the nationality after living here for more than 10 years or kissing the foreign minister’s ass.

Black people and indigenous people are also human beings, although only those fit the aforementioned description are Colombian.

Not all Colombians speak Spanish because they had their own languages thousands of years and the Spanish weren’t able to kill them all.

Also those who were never colonized, like the mighty Wayuu people, are Colombians.

This is not because they wanted to, but because they happened to live inside the borders of what is now Colombia after the Venezuelans, the Ecuadoreans and the Peruvians told you to go fuck yourselves, and the Americans stole Panama.

Since then, native Colombians and the descendants of slaves simply had to put up with you and your abuse.

Some Colombians got fed up with your bullshit and started guerrilla groups, which was the fashionable thing to do in Latin America in the 1960’s.

These guerrilla groups almost overthrew the State because your politicians and security forces suck.

They failed, because some of you decided to team up with drug traffickers to form paramilitary groups.

These groups allowed you to travel safely to your holiday homes and allowed some to steal shit-tons of land.

The problem is that while you were in your holiday home, other Colombians were terrorized and slowly but surely the entire country got fed up with your abuse.

Some pundit of television network RCN asked on Twitter why people were burning a statue of Simon Bolivar in Bogota. He might as well have asked why Jessica Cediel got an ass implant. How would I know?

All I know is that a lot of people are fed up and you’re fucked. I’d love to tell I know how you feel, but I don’t. I only care about your money.

So, email me if you want to learn more about empathy, private property and Colombians. I will throw in a masterclass on democracy for free.