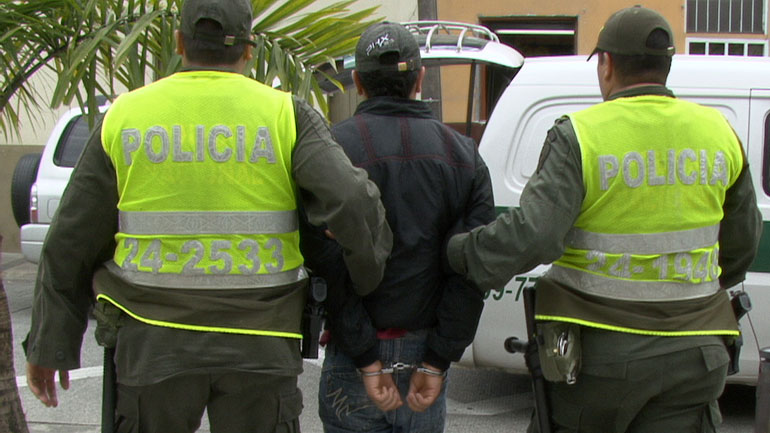 Almost a thousand raids have resulted in the arrest of over 800 individuals responsible for drug dealing in schools and universities across western and central Colombia.

“The prosecution and police managed to dismantle four bands dedicated to the trafficking of drugs in colleges and universities” announced Prosecutor General Eduardo Montealegre, confirming the news of one of the country’s largest ever operations with 940 raids across 159 municipalities, closing 318 drug outlets and four criminal networks.

They have issued warrants for the arrest of a total of 1,072 gang members engaged in drug trafficking at these institutions and so far seized 800 kilos of marijuana, 16 kilos of cocaine and $15,000 USD.

In the capital city of Bogota 70 raids were carried out capturing 27 individuals who had worked selling to colleges and universities in the neighborhoods of Suba, Ciudad Bolívar, Kennedy, Barrios Unidos, Antonio Nariño y Usaquén as well as the center of the city and many more.

In Medellin, 38 members of a group of drug dealers on the campus of the Antioquia University were taken in, newspaper El Colombiano reported Sunday.

In Cali with support from the National Army nine members of “La Jovita 2”, this group allegedly is responsible for selling drugs to students of nearby educational centers in the parks of the south-western city. This gang reportedly targets the institutions of Santa Librada, San Juan Bosco, Antonio Jose Camacho, Normal Superior of Young Ladies and Command Miraflores.

In Santander those responsible for distributing drugs in schools in the districts of Cabecera and San Pío in the municipality of Bucaramanga have been taken in.

‘Los Universitarios’  were captured in the municipality of Pereira in western Colombia.

Operations are continuing throughout the country in the northern departments of Sucre, Meta, Magdalena and Córdoba, among others as those captured are made available to the Sectional Narcotics Prosecution Unit.