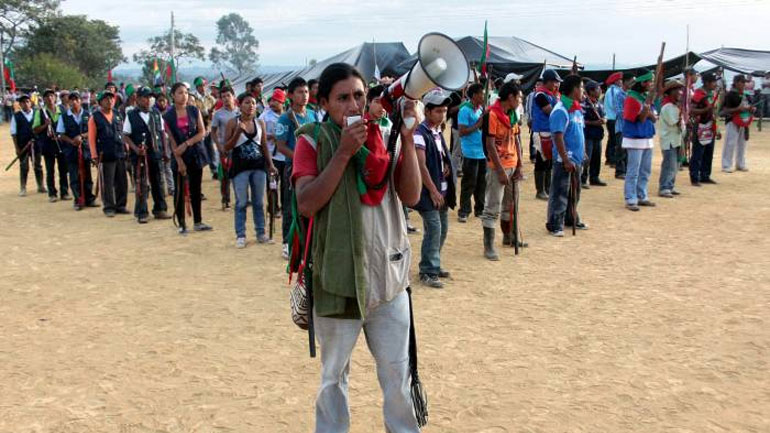 Five police officers were injured in a clash over land rights with indigenous communities in the Cauca province in southwest Colombia.

The officers are part of ESMAD, the mobile anti-disturbance squad frequently seen wearing equipment known as riot-gear. ESMAD has been charged with evicting members of the Nasa indigenous community, which took the Emperatriz “finca” near the rural town of Caloto on March 6.

One police officer had to be transported to Cali to receive treatment. The officer was hit by a home-made explosive.

According to the Colonel Edgar Rodríguez, commander of the National Police in Cauca, “The officer is recovering after being hit by a potato bomb, which is what they tend to use in this type of disturbance. The other officers were treated at the Hospital of Caloto and have already been discharged. ”

This clash is another in a series of conflicts between the indigenous communities of Cauca and the National Police this year.

Since February indigenous communities have seized private properties in a movement they are calling “The Liberation of Mother Earth.” The Nasa have taken the land as restitution for the violence their community suffered during the conflict between guerrillas and paramilitaries, as well as a response to large agro-business that dominates the region.

The Emperatriz is one of seven properties occupied by indigenous communities in northern Cauca since February 25.

The police forces have tried several times to remove the indigenous communities from the Emperatriz. According to the Prensa Rural, on March 19 the ESMAD used tear gas and stun grenades to evict the indigenous farmers. Despite these attempted evictions, members of the Huellas, Tóez, and Lopez Adentro remain on the farm.

The property has been the site of violence in the past. In 2006, 22 police officers were injured and one killed in a clash with the indigenous communities.