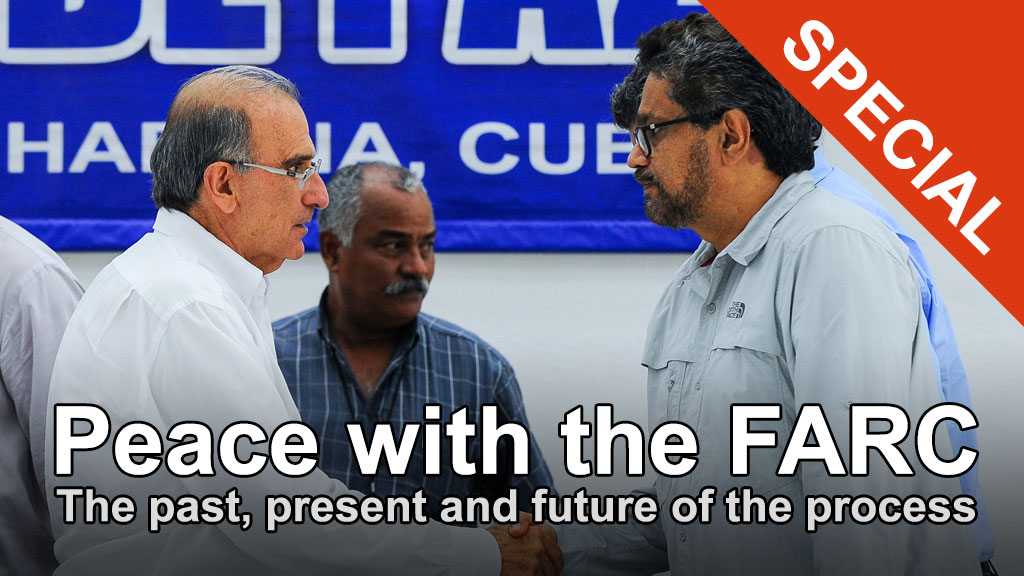 Colombia’s government and FARC rebels are negotiating peace, hoping to agree to a bilateral ceasefire to take effect within a month. However, there remain serious obstacles that could potentially derail the peace process that is celebrating its third anniversary.

While many important things have been achieved at the negotiation table in Havana over the last three years, some major issues involving the FARC’s transition from designated terrorist group to legal political party are still being negotiated.

Gathering the FARC in demobilization zones

One of the main conditions for a truce imposed by the government is that it wants the thousands of guerrillas to leave their jungle hideouts and concentrate rebel forces in the six designated demobilization areas.

FARC must agree to concentrate in designated areas before truce

These areas will act as a sort of halfway home for demobilizing guerrillas for a temporary period and there they would be under the responsibility of the government.

This system would also allow the State to rule out FARC involvement in any attacks on the security forces, the civilian population or infrastructure that are carried out during the truce.

Although the FARC has not rejected the government’s proposal to designate six concentration areas, the rebels originally demanded over 50 areas so that their troops would not have to travel across the country to demobilize, keeping them safe from rival illegal armed forces that could attack the rebels while on their way to the demobilization zones.

One crucial aspect of the aforementioned demobilization is the disarmament of FARC.

Humberto de la Calle, chief government negotiator in Havana, has said that the FARC must fully disarm in order for the State to engage in a bilateral ceasefire with the guerrillas.

The FARC, on the other hand, does not want to surrender its arms to the government, which are in the words of “Ivan Marquez,” the FARC’s chief negotiator, their “symbol of resistance” to the very government which they have been fighting for over fifty years.

Instead, the guerrillas have suggested that they will give their arms to a foreign government or to “a museum that reminds us that what we have gone through may never happen again.”

To avoid stockpiles of weapons being left in the jungle or heavily armed demobilization zones, it is necessary that the disarmament of FARC guerrillas will take place before or during the guerrillas’ demobilization.

However, the FARC is wary that once they are disarmed they could be vulnerable to attacks by neo-paramilitary forces or be betrayed by the administration of President Juan Manuel Santos, which is popularly known to not take promises very seriously. To ease the fear of attacks, theFARC has demanded that the government actively deconstruct neo-paramilitary structures across the country. The government’s compliance will be monitored by international observers.

Ratifying the peace deal by a notoriously corrupt congress

For peace between the state and the FARC to become reality, Colombia’s congress must agree on how to ratify the agreements made by the FARC and the government, and convert government commitments to law.

Colombia congress to decide how to seal peace deal with FARC

This is a significant hurdle because numerous lawmakers and political parties have been implicated in the conflict.

Moreover, Colombia’s congress is infamous for rampant corruption and its members have in the past corrupted reforms to serve their personal interests.

The FARC has consistently called for the peace deal to be ratified by a constituent assembly of people representing all walks of Colombian society, not just congressmen. However, Congress banned the involvement of any non-congressman taking part in a commission that would be responsible for the implementation of a peace deal, causing further distrust of the lawmakers’ objectives.

Approval of the Colombian people

If the current proposed method of ratification, a plebiscite, is passed by Congress the next hurdle is the approval of the peace deal by at least four million Colombians.

Colombia will vote on FARC peace deal in May or June: Santos

For the peace deal to be ratified, the Colombian population must agree but there are plenty of people who critique the peace process and represent a threat to its success.

Supporters of former president and critic of the peace process, Alvaro Uribe, have begun a campaign for a “No” vote when asked whether they agree with the negotiated peace deal as a whole rather than elements of it.

Uribe has said of the plebiscite that it is unfair to have only one question with a “yes” or “no” answer, saying that “a Colombian who says I am with peace but not with impunity, is not allowed to speak out.”

While Uribe lacks the popular support to mobilize the electorate to turn down a referendum or plebiscite, a low turnout could render the referendum invalid.

Peace could be overturned by any attack taking place during a bilateral ceasefire and even after the signing of a peace deal.

In April this year, while negotiators were making progress in Cuba, a disobedient FARC unit in Cauca killed 11 soldiers and spurred a downward spiral of violence that nearly sank the talks.

Similarly, black flag operations by opponents of the talks could sink public confidence in the process and affect the outcome of the referendum or plebiscite that would ratify the made compromises over the past three years.

Additionally, once the FARC decided to concentrate its forces and abandon its weapons, turf wars could break out between other parties involved in the drug trade that could undo violence reduction.

The future of Colombia Reports relies on your financial support. Please become a patron and support independent reporting from Colombia.
armed conflictceasefirepeace talks