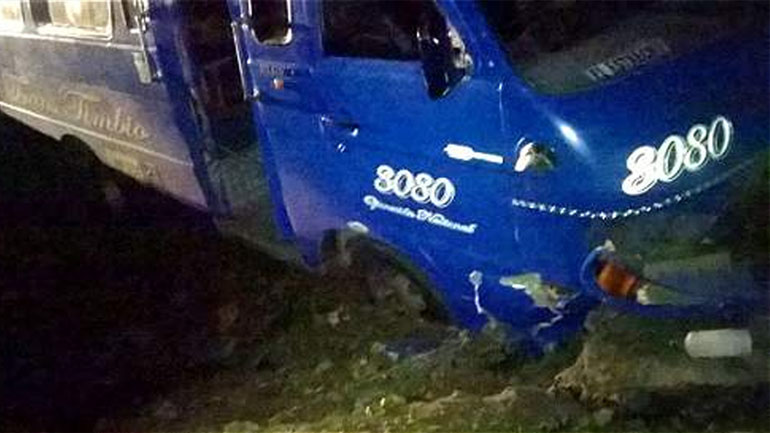 Rebel group FARC allegedly bombed a section of the Pan-american Highway, an attack that resulted in four wounded civilians and the closing of the road connecting Colombia and Ecuador.

Three adults and one child riding on a passing bus were injured after explosives were detonated by FARC on a section of the international highway connecting the states of Cauca and Narino.

“There are three adults with flesh wounds, fortunately now out of danger, and one minor who is also out of risk,” said Juan Carlos Ramirez, the deputy-commander of local police, quoted by Radio Blu.

Passengers were transported to the hospital and are all in stable condition.

The bus collided with the crater that was created when the explosive destroyed both lanes of the highway on a section between Pasto and Popayan, in Patia, Cauca. It was not clear how long after the explosion the collision occurred.

Guerrillas placed the explosive charges in a sewer located at the edge of the road, according to a report by Radio SantaFe.

Traffic to and from Nariño, a state in the west of Colombia bordering Ecuador and known for its coffee plantations, was completely blocked by the damage caused in the explosion.

The highway is a critical transportation and trade route, making it a favorite target of the rebel groups in the past several years.

The last attack on the highway occurred just days prior to the ceasefire, less than six months ago in December 2014. Two incidents within a single month were on sections of the road passing through Cauca, one of which damaged sixteen homes.

The attack comes on the heels of a suspended unilateral ceasefire the FARC have upheld since December, but fell apart after a rebel attack on an army unit that killed 11 soldiers spurred a series of retributions.

According to the military, authorities were able to prevent more than 40 FARC attacks since the rebels ended their truce.

The FARC leadership had promised to resume attacking military and infrastructure targets when announcing the ceasefire suspension last week.

As FARC attacks continue, rebel and government negotiators met again in Havana, Cuba to proceed with peace talks that began in November 2012.