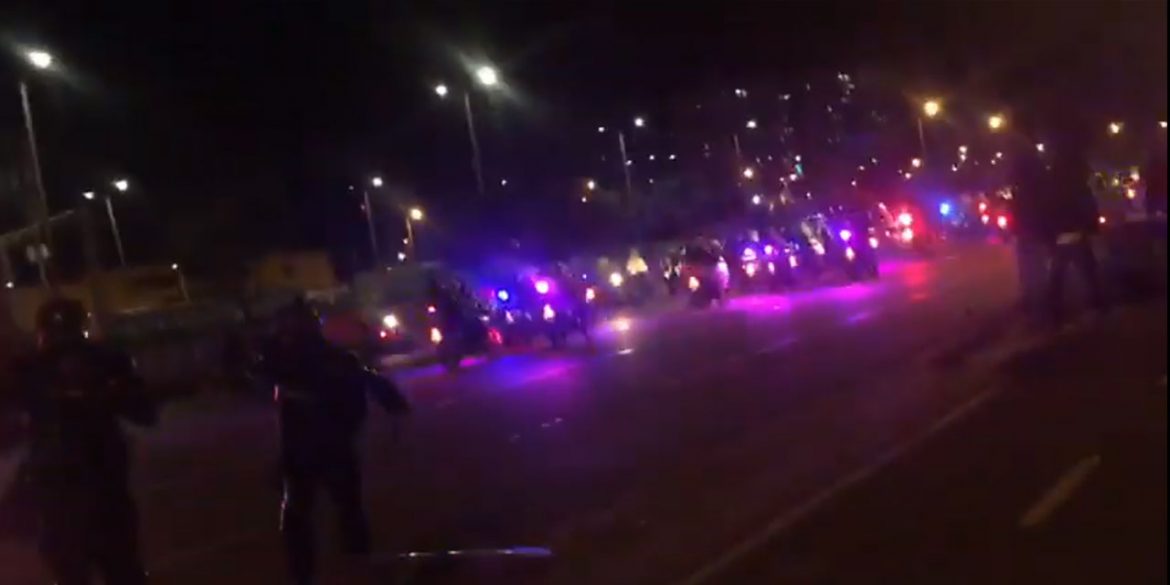 Colombia’s police returned to brutal repression on Wednesday after the US government expressed its support for President Ivan Duque, who has been facing mass anti-government protests for a week.

According to the District University Human Rights Network, police arrested approximately 20 students near three bus terminals in Bogota. At least one student was seriously injured.

An eye witness told Colombia Reports that at the Portal Norte bus terminal, controversial riot police unit ESMAD attacked a group of 150 students who were gathered there at the end of a day of peaceful protests.

Dozens of motorized policemen and three tanks arrived attacking the students with teargas, according to the witness.

At 10PM, approximately 50 police motorcycles arrived, all police, each with an ESMAD on the back. 3 tanks. At 10:10PM they start shooting tear gas.

The witness account was confirmed by video recordings and dozens of others, including human rights organizations and congressmen.

In panic, the students were subsequently dispersed by motorized police who, in the vicinity of the bus terminal, allegedly arrested three of the 20 missing students.

In the chaos, one student was seriously injured when he fell off a bridge.

Attacks follow day of peaceful protests and US endorsement

The sudden outbreak of violence and wave of arrests followed hours after US Secretary of State Mike Pompeo tweeted his support for Duque, who has been under fire over violent attempts to repress peaceful protests.

The top US official said he supported Duque’s “National Conversation.” The talks have been rejected by strike leaders, however, because the president allegedly refused to attend concerns on which they have been trying to negotiate since a month prior to the beginning of last week’s national strike.

Good speaking with Colombian President @IvanDuque today. We welcome the national dialogue President Duque has convened as an opportunity for the Colombian people to work together to advance peace, security, and prosperity.

Pompeo’s endorsement ignored calls on Duque to engage in dialogue with the strike organizers by members of Congress and the inspector general.

Before Pompeo’s tweet, US Ambassador Philip Goldberg was among the most outspoken diplomats to defend the peaceful nature of the protesters, contradicting the Colombian president’s attempts to stigmatize them.

The return of repression of peaceful protests

The government’s violent repression of the protests and the alleged use of terror tactics have isolated Duque and his far-right Democratic Center party.

The increasingly authoritarian government’s response to the protests have further sunk the president’s approval rating.

Following the alleged state participation in the terrorizing of residents in Cali and Bogota on Thursday and Friday, and the fatal shooting of a protester on Saturday, the United Nations and the Inspector General’s Office have increased their presence at the marches to prevent police brutality.

Instead of attacking the marches, which have been ongoing throughout Colombia for a week, the police in Bogota appear to have changed strategy, attacking student protesters out of sight of the human rights observers.