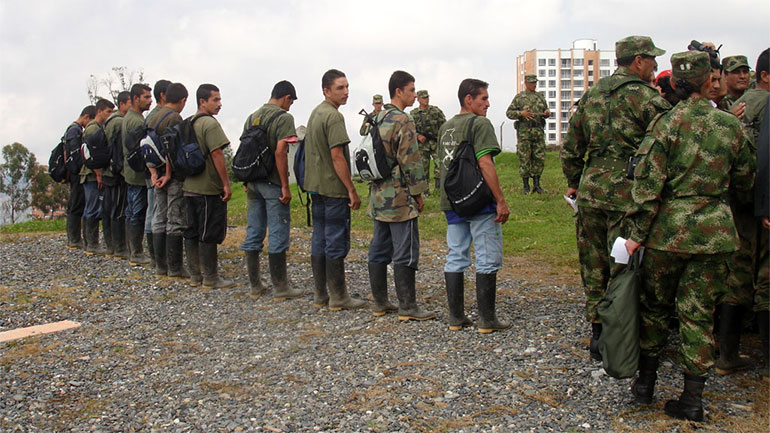 Colombia president Juan Manuel Santos said Tuesday he estimated that more than 17,000 FARC rebels will demobilize if a peace deal with the guerrilla group is signed.

Ahead of the March 23 deadline, the rebels and the Santos administration are seeking to move towards a solution on the issue of the demobilization of troops, the decommissioning of weapons and the reintegration of fighters, or DDR.

“I estimate that there are about 7,500 FARC armed men and some 10,000 militia members,” Santos said, but said it is a figure that is trying to corroborate.

The estimation is lower than that of the director of the Reintegration agency, who estimated 20,000 demobilized fighters, militia members and unarmed members.

The talks between Colombia’s government and the left wing guerrilla militants, the FARC have reached agreement on the rebels’ inclusion to politics, rural reform, the rebels’ abandonment of drug trafficking, victim compensation and justice.

Up to this point there has been much debate about the willingness of the FARC to demobilize aswell as the ability of the government to reintegrate the troops.

This contention was addressed by the president yesterday as he cited previously successful demobilization initiatives.

“Many people in the country wonder, what they do with all the people who are going to demobilize in the FARC. They forget that we have already demobilized 59,000 people,” Santos said.

The DDR issue will dominate the final days of the three-year long negotiation process as the both sides seek to agree upon a model to end the conflict that has been raging for 51 years.

The success of the process as a whole will depend upon the ability of both the government and the Colombian public to embrace the challenge of reintegrating these rebels into civilian life.

Joshua Mitrotti, director of the Colombian Agency for Reintegration, ACR, highlighted that the 13 years of experience have allowed the demobilization of 59,000 people, and Colombians have financed more than 600 million. “It was worth it,” Mitrotti said.

“A person in the process of reintegration worth 5.7 million pesos a year, with all the benefits. A person in jail in Colombia, without the judiciary, worth 17 million pesos “, compared the director of the ACR.

According Mitrotti, “the success rate of prison in Colombia is only 30%. For every 10 people released from prison, seven are captured again within 3 years for more complex and deeper crimes.”

Mitrotti invited businessmen to be part of the demobilization process and President Juan Manuel Santos stressed that if you add to the process and if the country continues to build peace, the benefits multiply.

Santos also emphasized this point and highlighted the success of previous reintegration processes where many of the demobilized made valuable contributions in their fields of post-conflict employment.

“Many entrepreneurs who have hired demobilized, come and say, ‘Man, these people really have served us well”, said the president during the annual meeting of the Colombo-American Chamber of Commerce.

These elements of the negotiations will be central in the closing stages as the Santos government and the FARC, seek to end an internal conflagration that has officially left more than 260,000 dead and more than 6.6 million displaced.