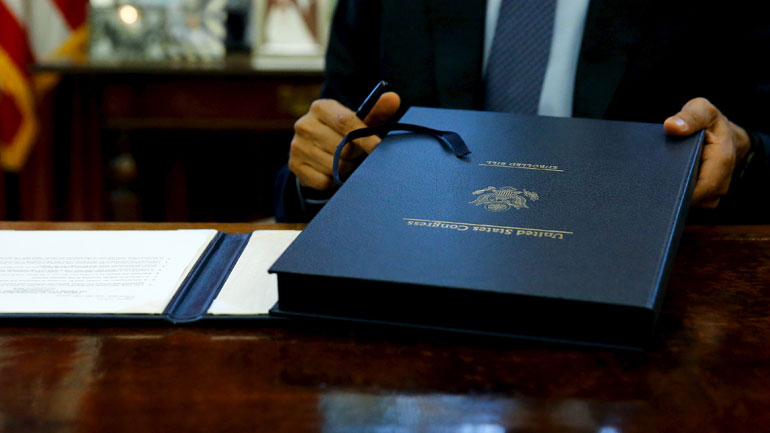 United States President Barack Obama proposed a major increase in aid for Colombia that is expected to begin a peace process with leftist FARC rebels within months. Here are the numbers.

Obama’s new $450 million “Peace Colombia” proposal would mean a sizable boost from the current level of assistance, but a considerable portion of the additional aid would go to military and counternarcotics programs rather than projects to build a sustainable post-war society.

The overall US aid package would grow $110 million over this year’s level, a 32% jump.

That much was heralded by both Obama and Colombian President Juan Manuel Santos at their joint press conference in Washington earlier this month.

Differences between Plan and Peace Colombia

The new Peace Colombia project would be a successor to “Plan Colombia,” which provided nearly $10 billion in aid over its 15 years.

But an examination of the Peace Colombia details reveals that military and other security assistance would still far outweigh peace-building aid.

Meanwhile, there would be an $32 million increase (16%) for Foreign Military Financing, Narcotics Control and Law Enforcement, and Defense Department counternarcotics projects.

“Peace Colombia is a smaller, more military program than what I wanted,” wrote Adam Isaacson, an expert in US-Colombian relations, on website RazonPublica.com.

Compared with the previous Plan Colombia, “it’s different but not radically so,” according to Isaacson.

While exceeding current funding, Obama’s Peace Colombia proposal is well below spending a decade ago under Plan Colombia.

“It sends the unfortunate message that Washington is more generous in times of war than in times of peace,” wrote Isaacson, Senior Associate for Regional Security Policy at Washington Office on Latin America (WOLA).

Passing the bill through Congress

Even if approved by Congress, new funding wouldn’t take effect until October 1, 2016, the start of the US fiscal year.

That would be months after the proposed disarming of the FARC guerillas and the beginning of economic and social renewal in rural Colombia.

Also, there is no guarantee that Obama’s proposal will make it through Congress, which is controlled by Republicans who have been steadfast in opposing almost all of Obama’s initiatives.

For example, the House of Representatives recently took the unprecedented step of not inviting Obama’s budget director to make a personal appearance to introduce the overall spending package.

“Dead on arrival” has become a common phrase used by Republicans to describe Obama proposals.

Possible challenges from both liberals and conservatives in Congress

Isaacson acknowledged the possibility that radical right-wingers in the House may challenge the peace-building portions of Peace Colombia. But he was cautiously optimistic that Obama’s proposal would mostly survive, he told Colombia Reports.

“The Colombian government has a lot of support in the House,” he said. “And the Colombian military and police will support it” in conversations with reluctant Congressmen.

But the politics in Washington make it “almost impossible to get economic aid increased,” he continued, emphasizing that such assistance is crucial for building a sustainable peace.

“And Congress may put some strings on the aid. That would be onerous but not a deal-breaker.”

Conservatives might attach requirements for stricter anti-narcotics programs and for extradition of some FARC leaders to the US.

Liberals might attach some human rights conditions, if they believe that the peace treaty doesn’t sufficiently punish human rights violators from both the FARC and the government.

Isaacson is optimistic about the success of the initial phase after a peace treaty is put in place, saying both governments will do what it takes to protect the newly disarmed FARC fighters from attacks by paramilitaries.

“What a huge black eye it would be if the Colombian military is found not protecting the guerillas. The military leadership knows that,” he said.

But it’s the follow-up stages that will be more challenging, he said. “It’s when the guerillas start integrating into society that Colombia’s capacity falls apart.”

When it comes to local economic development in rural areas, “The Colombian government does not have a history of management and expertise, or political will. A lot will depend on local leadership.”

Distributed through the US Agency for International Development (USAID), the money supports rebuilding a government presence in historically abandoned areas; assistance for war victims, ethnic minorities, justice and human rights. While the proposal is a $46 million boost from current funding, it would still lag funding from half-a-dozen years ago.

In the recent past, most of this money went for airborne chemical spraying of coca fields. While that is suspended, aid will continue for other aerial operations, narcotics interdiction, manual eradication of coca, military training by Colombian personnel in other Latin American countries, and especially for an increased presence of the National Police in rural areas. Funding would increase $26 million over the current level.

Details of this aid are not public, but it’s likely the money is for sea and air interdiction of drug shipments, intelligence operations and military/police training. The amount is $7.3 million less than the current year.

Details are not public, nor the reason for the $13.5 million increase from current aid. US documents make general statements about continuing to strengthen Colombian forces to guarantee that advances in security are irreversible.

Most of the $17 million increase is for a contribution to a Norwegian-led project to remove landmines. Colombia has the second-largest number of landmine victims in the world (behind Afghanistan), according to Norwegian People’s Aid, and the goal is to eliminate all Colombian landmines by 2021.