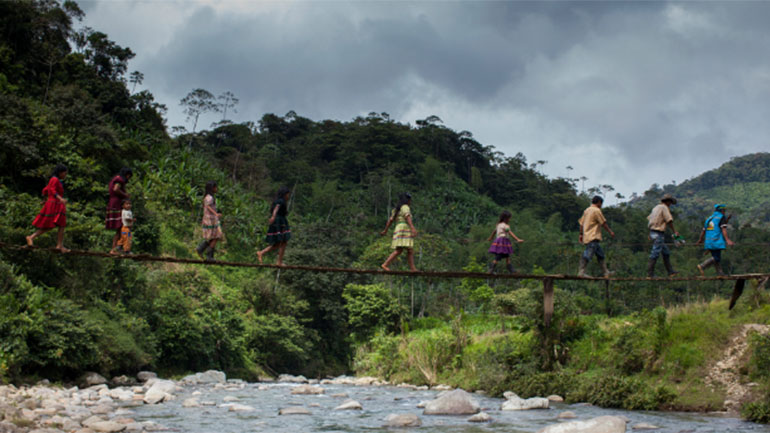 A group of indigenous have been attacked by a rancher’s 60-man private army in an attempt to remove them from land in northwest Colombia from where they had been displaced, local media reported.

Approximately 60 men armed with sticks and machetes entered Guapa Leon in the Uraba region to forcibly evict a  group of 104 indigenous including 73 children, who had returned to the area and reclaim land they had lost without institutional support.

According to indigenous representative Robin Domico, armed personnel of local rancher Jaime Uribe were behind the attack.

“There are approximately 60 people evicting indigenous by burning their huts and attacking them with clubs,” Domico told IPC.

“The site claimed by the indigenous is currently held by the businessman Uribe, whose foremen and administrators are the ones carrying out the evictions,” explained Domico.

This is not the first instance a private army violently evicting land claimants in Uraba, one of the regions hit hardest by guerrilla and paramilitary violence that spurred the mass displacement of millions throughout Colombia over the past decades.

On 10 February, 2015, a group of at least 80 men on horseback, some of them masked, attacked 14 families in similar fashion returning them to an area near the port city of Turbo.

Government policy regarding  land restitution in the case of indigenous groups who have been displaced by the conflict has come in for criticism. Amnesty International’s 2015/16 report criticized the slow progress, which would explain why these indigenous groups are re-entering such territory.

“The land restitution process, which began in 2012 with the aim of returning to their rightful occupants some of the millions of hectares of land illegally acquired or forcibly abandoned during the conflict, continued to make slow progress”.

“By the end of 2015, only 58,500 hectares of land claimed by peasant farmers, one 50,000-hectare indigenous territory and one 71,000-hectare Afro-descendant territory were subject to judicial rulings ordering their return.”